I’ve been really mellow about the breads I’ve made so far with the Mellow Bakers but when I saw this Challah on the list for October, I knew I had to make it. I just love making braided breads. I also like learning the history of breads made throughout the world, and in particular, the symbolism behind the making of Challah.

"There are two words for bread in Hebrew: lechem and challah. Lechem is the everyday bread...Challah is the special, usually white egg bread reserved for the Sabbath. Challah is also the word that refers to the portion of dough set apart for the high priests in the Temple of Jerusalem. One of the three commandments incumbent upon women, "taking challah," evolved sometime following the destruction of the Temple by the Romans in 70 C.E. Following the rising of the dough, women would separate a piece and burn it to remind them of the offerings to the Temple. For nearly two millennia it has symbolically replaced the sacrificial offerings. All challah that is baked today is kosher only if "challah has been taken."...It was the Eastern European immigrants who put challah on the gastronomical map in the country. In biblical times...Sabbath bread was probably more like our present-day pita. Through the ages and as Jews moved to different lands the loaves varied. But only in America could Jews eat challah...every day of the week...Elsewhere a round challan at Rosh Hashanah became a symbol of life. Usually the Rosh Hashanah bread is formed in a circle, to signify the desire for a long life.” 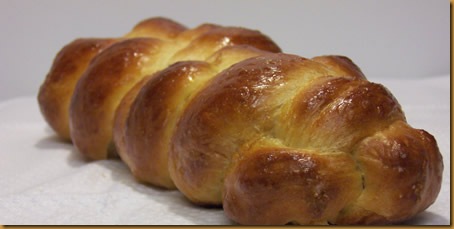 I made a 4-strand challah, a 3-strand challah and two 2-stranded rolls.  I made the dough Friday morning before work, but didn’t get a chance to bake it until Sunday afternoon.  So it rested in the refrigerator for two days longer than the recipe recommended. 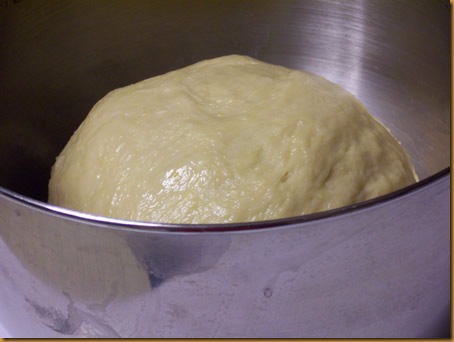 When I was ready to bake the loaves, I divided the dough into four pieces and made a large ball, a medium ball and two small balls.  Since the dough had been resting in the refrigerator, it was pretty stiff.  So I let the balls rest on the counter for a while to soften up. 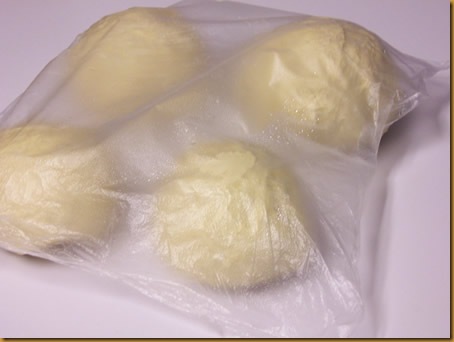 I started with the Two-Strand Rolls.

I took one of the dough balls and divided it into two equal pieces. 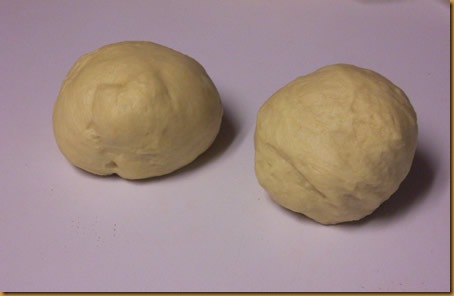 Then I rolled both balls out into strands of equal length. 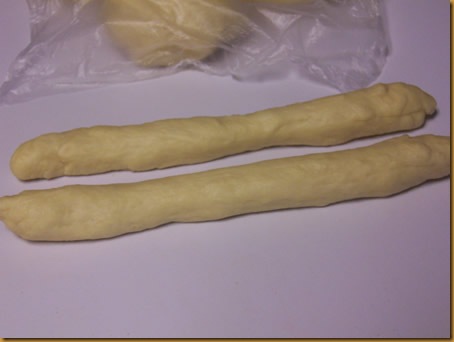 Then I braided them using the two-strand method. 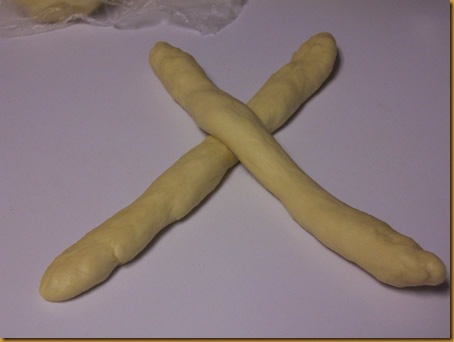 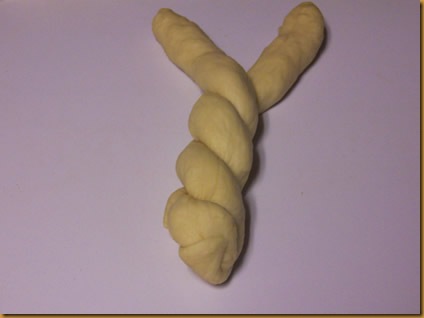 Then I took the two strands and curled them up into a roll. 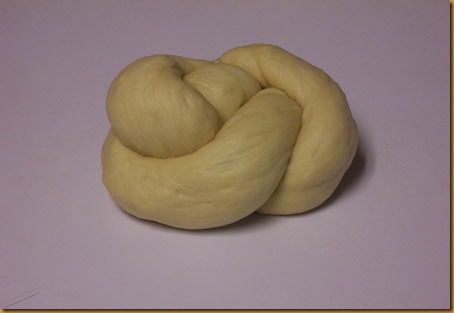 I did the same with the other small piece of dough and placed them both on a cookie sheet to proof. 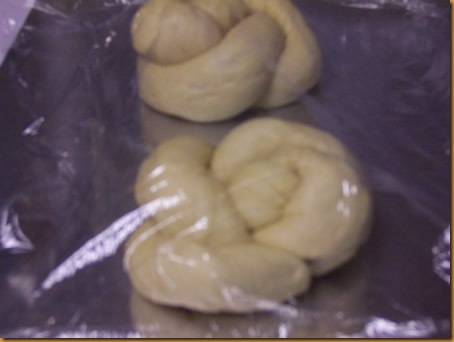 Then I baked them. Here is what the finished Two-Strand Roll looks like. 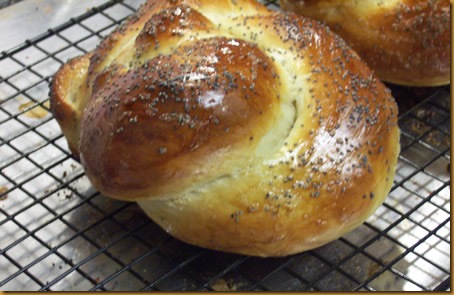 Then I moved on to the Four-Strand Braid.

I cut 4 equal pieces from the large dough ball and roll each piece into a strand.  I made them longer this time. 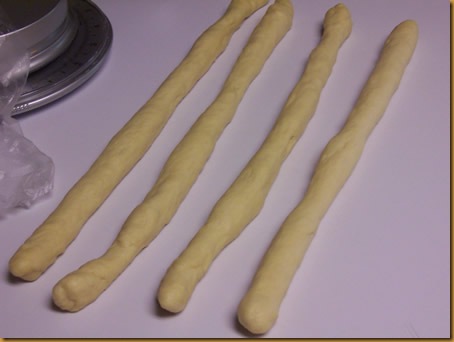 Then I made the braid using the 4-strand technique. 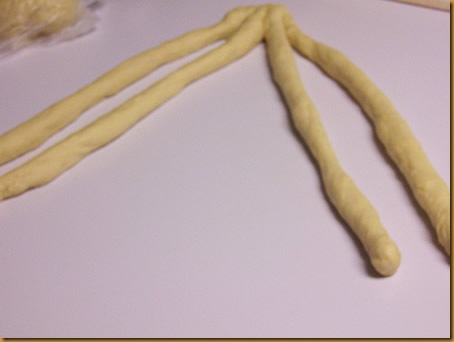 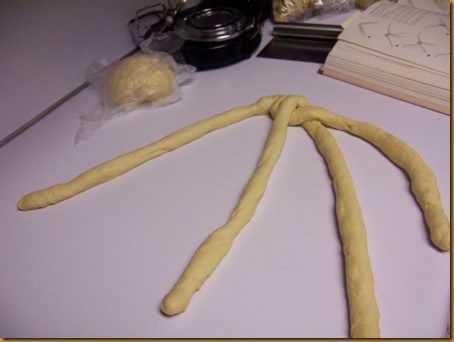 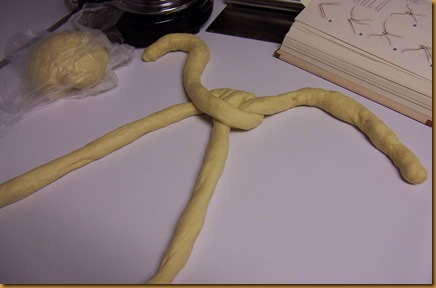 I started out using method 1, but about this point, I switched to method 2 which is the way I usually do it. 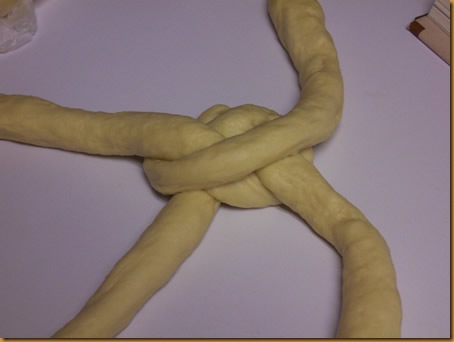 So, it ended up being a combination of method 1 and 2. 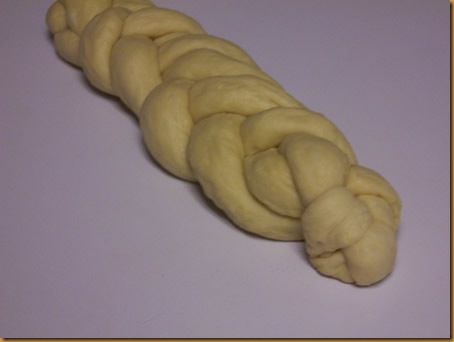 The Four-Strand Bread baked up pretty nicely even if the braids weren’t completely even. 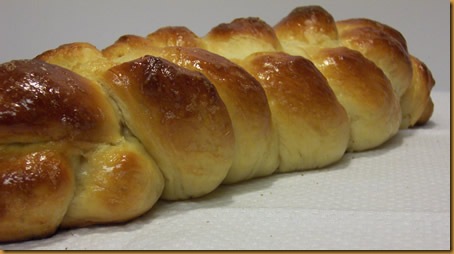 Last, but not least, the Three–Strand Braid.

I divided the medium dough ball into 3 equal pieces and rolled each piece into a long strand. 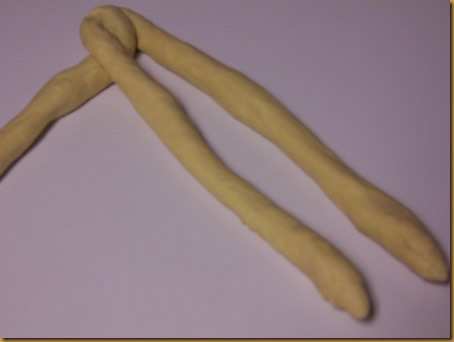 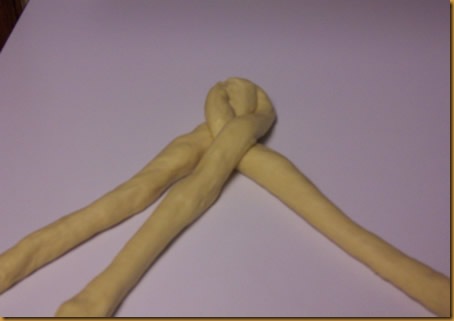 It had been awhile since I had made a braided bread.  I was starting to get the hang of the braiding again by now. 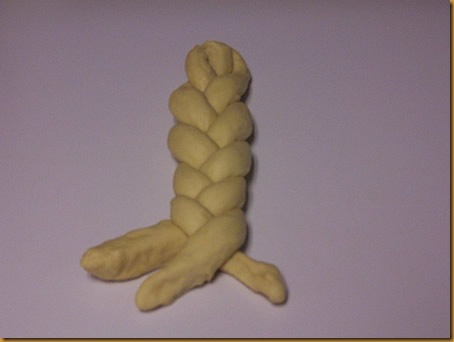 Finish the braid by tucking the ends under.  This photo is a bit blurry because it’s hard to hold the camera and tuck the ends at the same time. 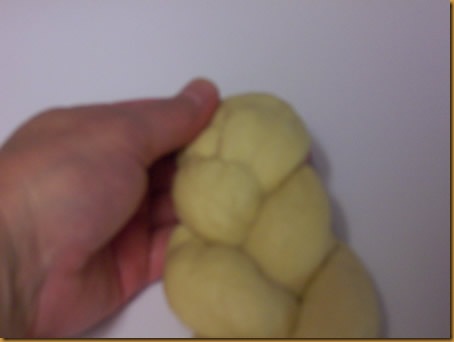 Here is the finished Three-Strand Braid. 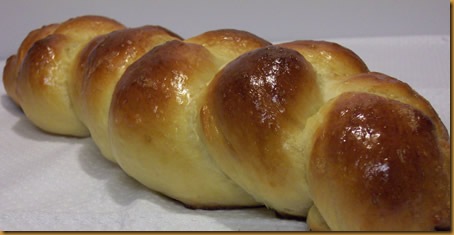 I enjoyed making all of these braids.  I thought about making a double braid for a celebration Challah, but I want to use these loaves for something different so I opted to make the regular braids instead. 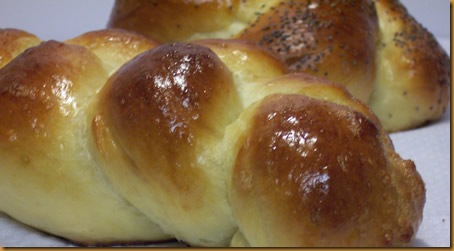 I didn’t get a crumb shot because I gave one of the roll-shaped loaves away and I’m keeping the 3-strand and 4-strand braids for some special French Toast.

I did try the other roll. It was a little bit dry probably because of being in the refrigerator too long.  I’ve also heard that the addition of egg whites can make the Challah dry. However, I think it will do well for French Toast.

Be sure to check out what the other bakers have been up to in the Mellow Bakers group.  There are some awesome braided breads out there.

Thanks for joining us in the Bread Experience bread-baking blog.