The featured bread for December in the Healthy Bread in Five Minutes baking group is Whole Grain Challah with Cranberries and Orange Zest.  Traditional Challah is white egg bread so we're breaking a little bit from tradition here by using whole wheat flour, but this version will be healthier and flavorful.  I love the addition of the cranberries and orange zest.  the authors of Healthy Bread in Five Minutes shared this recipe for the bread bake.

The Whole Grain Challah is the second bonus bread.  The bonus bread for November was Pumpkin Pie Brioche.

Here is a little history about Challah ...

"Challa is a Sabbath and holiday delicacy. For Shabbes it is always made in a braided form. On holidays it may be kneaded into other shapes: circular, ladderlike, etc...Two challas, uncut, are on the table of observing Jews on Sabbath eve; they are not cut until after the broche (blessing). This practice perpetuates the memory of the Temple, where two rows of bread were lined up before the altar. The home, which is of limitless importance in Jewish life, is in fact called in Hebrew "migdash mehad"--or "a small temple." When a challlah (or any Sabbath bread) is baked, a small piece of dough is, by tradition, tossed into the oven or fire--as a token of sacrifice. Why? Because challa is a Hebrew term used in Numbers 15:20 and Ezekiel 44:30, where it means "the priest's share" of the baking dough."
--- The Joys of Yiddish, Leo Rosten [McGraw Hill:New York] 1968 (p. 68-9) 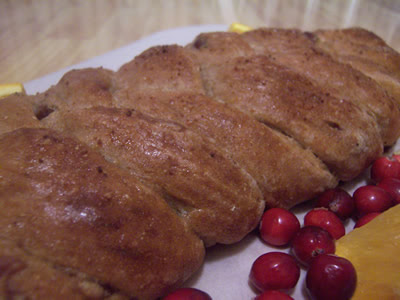 Mixing and Storing the Dough

Whisk or stir together the dry ingredients in a 5-quart mixing bowl, or a non-airtight, lidded food container.  I decided to use a different container this time because there wasn't enough room in my refrigerator for the one I usually use.  This turned out to be a mistake and soon you'll find out why.

Add the cranberries, orange zest, liquid ingredients and eggs and mix.  I used a spoon, then switched to my Danish dough whisk. 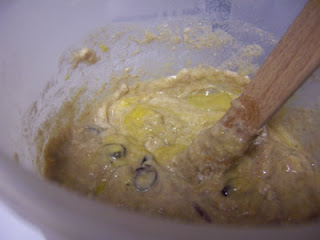 Then, I ended up putting it in a mixing bowl to finish incorporating all of the ingredients because the container wasn't conducive to mixing. 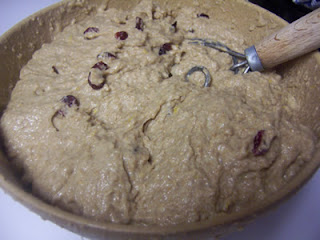 Cover (not airtight) and allow to rest at room temperature until the dough rises and collapses (or flattens on top), approximately 2 hours. Then, place the dough in the refrigerator and use over the next 5 days or store in the freezer for up to two weeks. 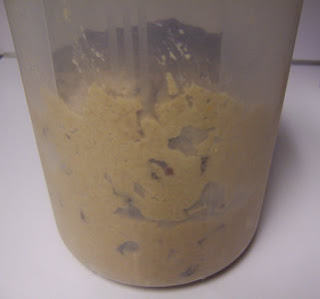 My funny bread experience: As I mentioned before, using a different container was a mistake because it wasn't big enough to allow the dough to rise to its full potential. So, as you can imagine, the dough exploded all over the counter.  Not to mention the fact that I was doing this really late at night and I fell asleep (again) while it was rising on the counter. It actually rested on the counter for about 7 hours instead of 2 - Ooops!

I wish I had taken a picture to show you the mess, but all I could think about was cleaning it up.  Actually, I'm glad I hadn't put the container in the refrigerator or I would've really had a big mess to clean up. Once I got the mess cleaned up, I froze 2 pounds of the dough (in separate containers) and then transferred the remaining 2 1/2 pounds back to the original container.  The dough was quite happy after that.  I guess I should've listened to it to begin with when I saw how much it was rising.  My bad!

By the way, you can thank Jim for convincing me to share this experience with you.  I had debated about whether or not to let you in on my mishaps, but he visited my site the other day and said he got a kick out of the exploding buttermilk plant so I decided I would provide some more laughs.  So, thank you Jim.  I liked your story as well.


A couple of days later, after the dough and I had a chance to recuperate, I decided to bake the challah.  I took the dough out of the refrigerator, dusted it with a little flour and cut off and weighed a 1-pound portion.  Then I shaped it into a rough log. 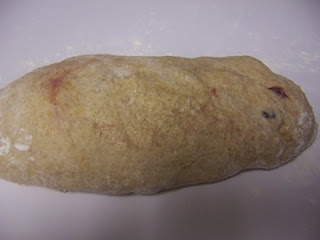 This is where I deviated from the instructions in the book.  I decided to do the 5-strand Challah instead of the 3-strand. I've made 3-strand braids before so I wanted to do something different.  I watched this video on shaping 5-strand challah that Michelle so graciously hunted down for all of us. It was very helpful!  It looks like so much fun, I think I may have to do my own challah video - or not!


Next, you cut the dough into 5 pieces.  Then roll the dough out into a long log.  If the dough gets to dry, spritz it with water.  If it's too wet, sprinkle a little bit of flour.  I had to do both.  Then, lay the strands vertically side-by-side to begin shaping the challah. 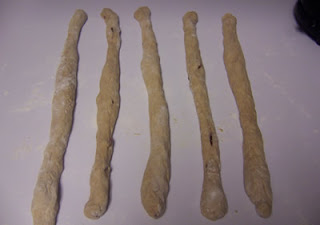 Crimp the ends together at one end. Begin braiding the strands by separating them into 3 strands on one side and 2 strands on the other. 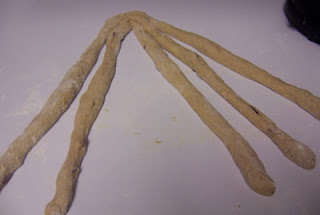 Bring the right-most strand to the middle. 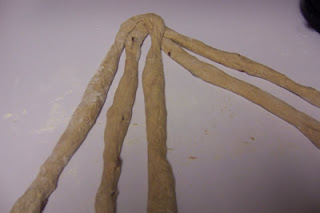 Then, bring the left-most strand to the middle and tuck it just a little bit but not too much.  It needs room to grow. 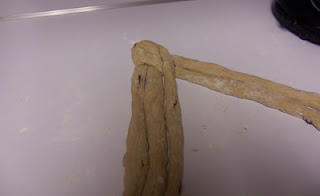 Continue with this process of bringing the right-most strand to the middle, then the left and so forth. 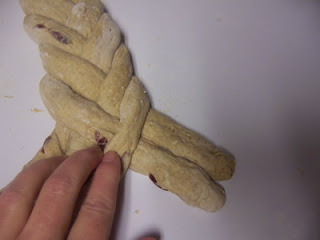 Then, press down on the end and tuck it under. 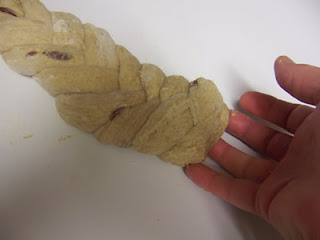 Go back to the top of the braid and tuck it under as well.  If the braid is a oddly shaped, fix it by nudging and stretching.  I just sort of poofed it a bit.

Place the braid on a cookie sheet.  You can use shortening, parchment, or a silicone mat.  I used olive oil spray.  Not sure if that is acceptable for traditional challah but we're not making a traditional challah and that's all I had at the moment.  Allow the dough to rest for 90 minutes.  Preheat the oven to 350 degrees. Brush the loaf with an egg wash. 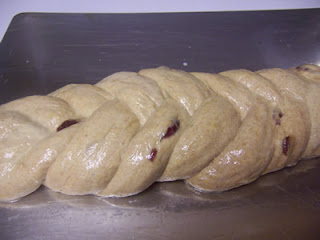 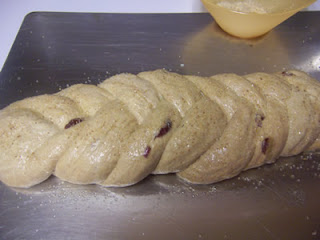 Place the baking sheet near the center of the oven and bake for about 30 minutes, until browned and firm.  You should be proud of me, I didn't fall asleep this time.  ;) 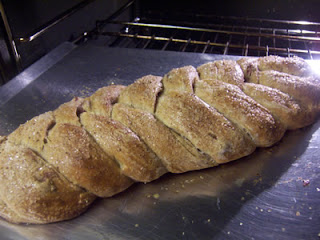 Allow the loaf to cool on a wire rack before slicing or serving (or eating).

Here's the finished product.  I couldn't bring myself to cut it yet. We'd been through too much together already. 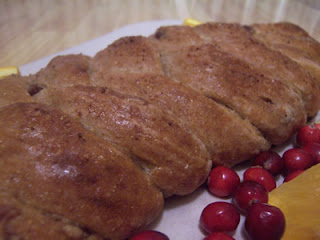 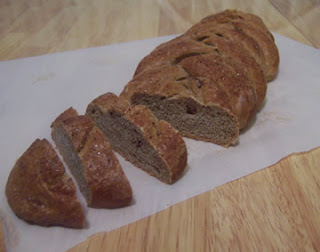 I had a couple of slices with peanut butter.  It was Yummy!  Forgot to take picture but the flavor of the orange zest and cranberries was really good.
That's about it for this bread.  I'll be making a different bread out of this same dough next time. I'm going to keep you in suspense.  You'll have to check back to see what kind of bread I plan to make.