The first bread for the July 1st HBinFive Bread Braid, is Whole Wheat Mixed Berry Bread. You can use frozen mixed berries or any kind of frozen berries for this bread.

I had some frozen strawberries left over from my strawberry-picking adventure so I decided to make Strawberry Bread rather than Mixed Berry Bread. 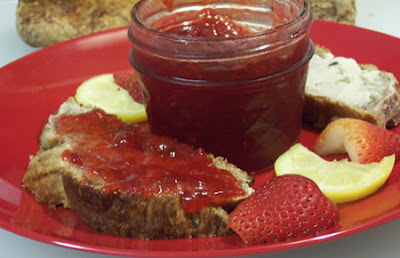 To begin the process, I let the strawberries defrost for a little while. Then cut them up into smaller pieces. 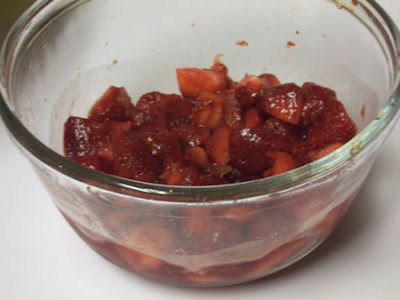 While the strawberries were thawing, I milled some white whole wheat flour using my WonderMill. 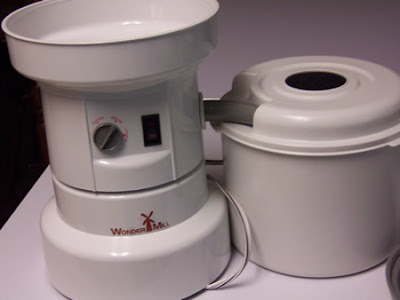 It's very durable and can mill up to 6-8 cups of wheat. 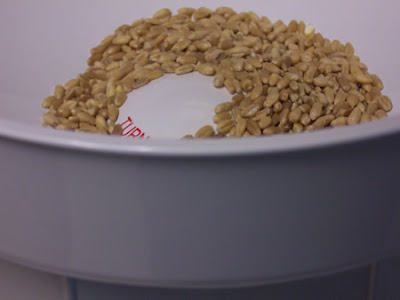 This is the freshly-milled white whole wheat flour. 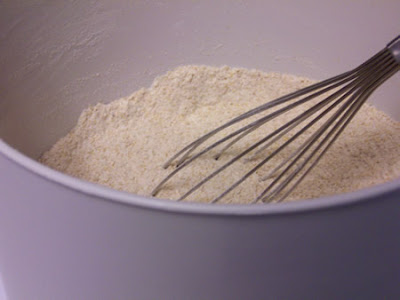 Next, I whisked together all of the dry ingredients (white whole wheat, all-purpose, yeast, salt, and vital wheat gluten). 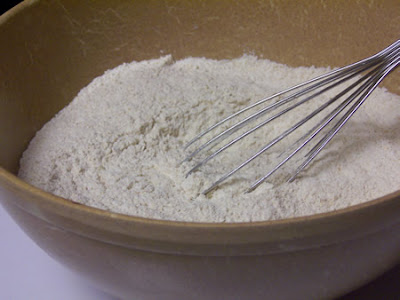 Then I combined the wet ingredients (water, honey, and berries) 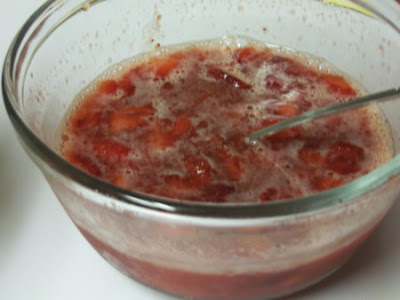 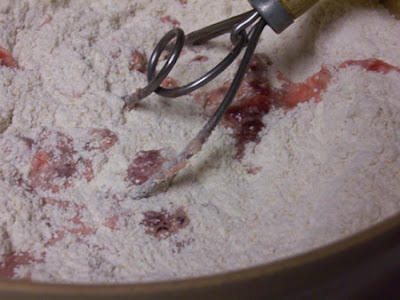 I had heard from some of the other bakers that their dough was really wet due to the thawed berry juice so I was expecting a very wet dough. However, that was not the case with my dough.  In fact, I had to add a bit more water because the home-milled whole wheat flour soaked up the liquid. 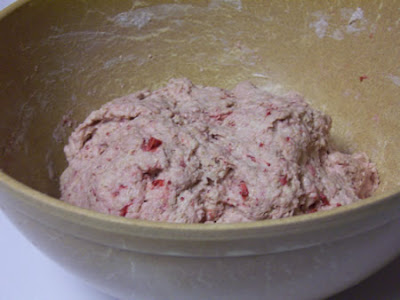 Once the dough was thoroughly mixed, I covered it and let it sit on the counter for 2 hours to rest. 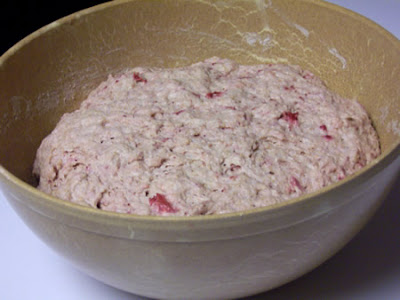 After the dough rested on the counter for 2 hours, I placed it in the refrigerator to ferment overnight.

The next day, I removed the dough from the refrigerator and since it was such a good consistency, I decided to shape it into braids rather than regular loaves.

I divided the dough into 3 balls. Then I divided each ball in half for a total of six balls of dough. I had only made 1/2 batch of dough which was enough for two loaves. 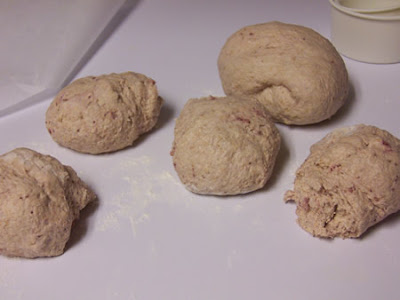 I rolled each ball of dough into a long rope. 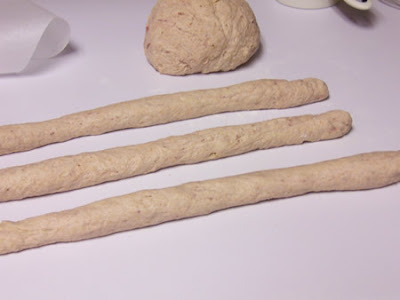 Then I placed 3 ropes vertically side-by-side. 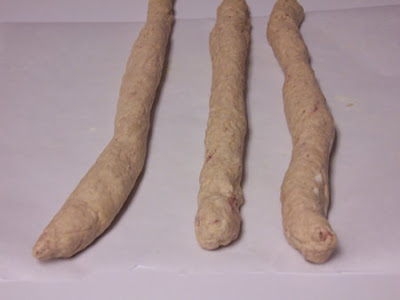 And crimped the ends together on one end to secure the braid. 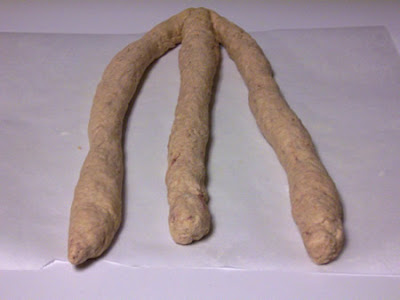 Then I braided the bread using the over and under technique. 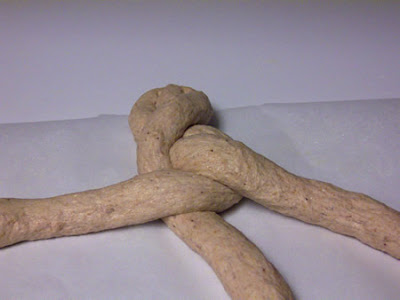 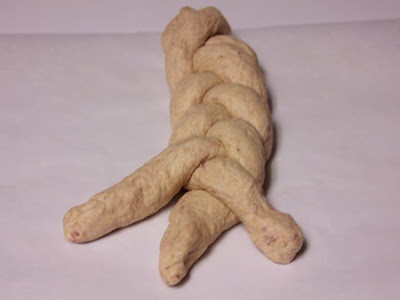 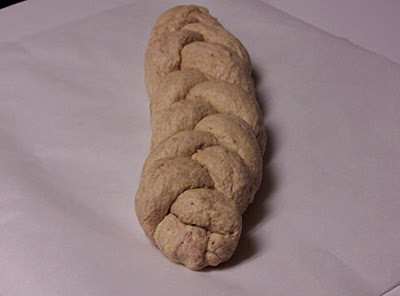 Then I tucked the ends of the other side underneath. 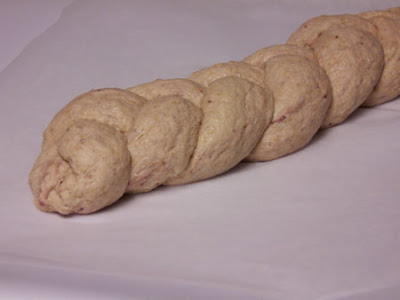 Eventhough the dough wasn't extremely wet, it was still sticky so the braid didn't turn out as nicely as I would've liked.  So, I decided to try a different method of braiding for the other braid.

I put the three strips vertically side-by-side, then I started the braid from the middle this time. 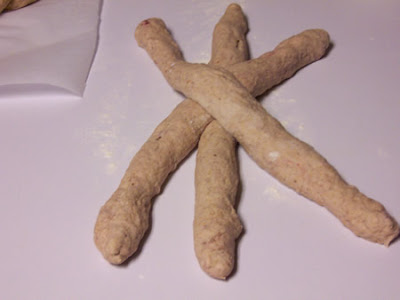 And did the over under technique on the bottom half. 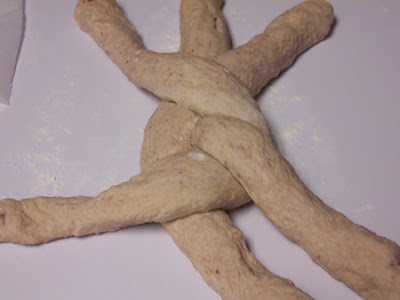 Then tucked the ends underneath. 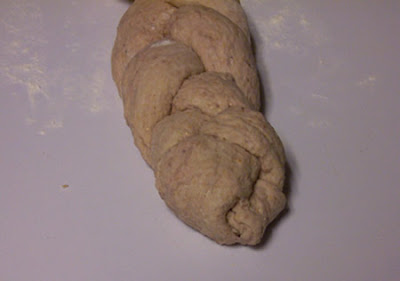 Then I repeated the over and under technique on the other half. 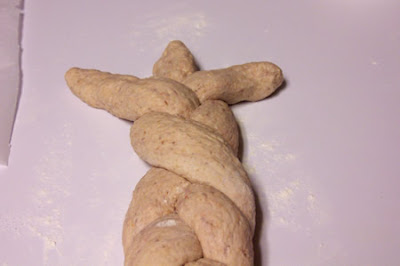 And tucked those ends underneath. 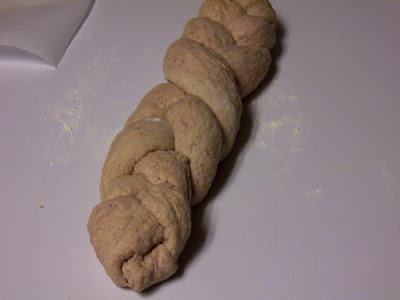 I actually think I like the first braid better.  It seems to be a little more uniform.  It's the one on the right in the photo below: 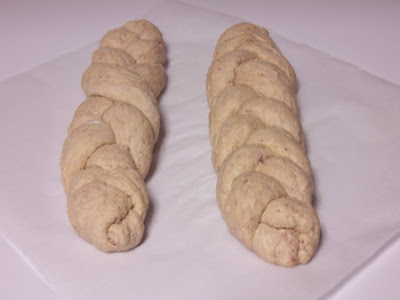 The braids were looking pretty good now so I covered them with plastic and let them rest for about 1 1/2 hours. I think that was a mistake.  It was really hot and they lost their shape during the rise. 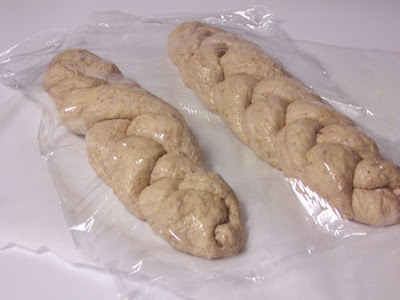 When it was time to bake the loaves, I brushed them with egg wash and sprinkled them with raw sugar.  Then I baked them for about 25 to 30 minutes in a 450 degrees oven on a baking sheet (without the stone). 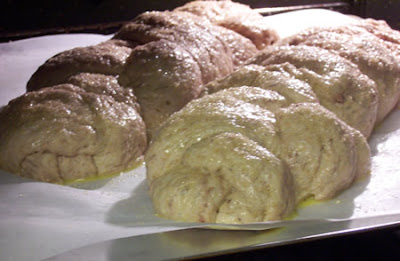 Once the loaves were baked through, I removed them to the cooling rack to cool before slicing. 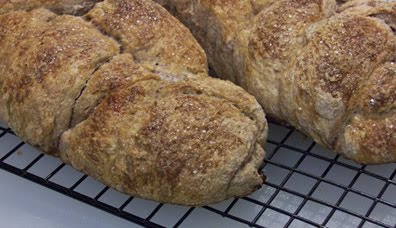 Then it was time to it eat.  The egg wash and raw sugar made the outside brown and little bit crusty.  The dough was a beautiful color, but once it was baked, you could hardly tell that there were any strawberries in the dough. It still tasted good though. 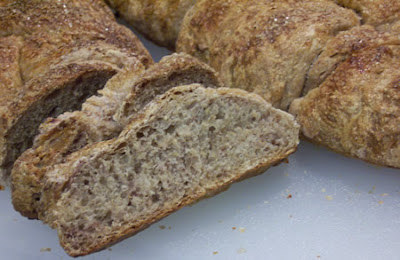 I toasted a couple of slices.  I had one with cinnamon and honey cream cheese and the other with homemade Strawberry Lemon Marmalade which was made from the strawberries we picked. Delicious!

Thanks for joining me in the bread-baking blog.  Check out BigBlackDog to see all of the breads in the July 1st Bread Braid roundup.

The HBinFive Baking Group, started by Michelle of Big Black Dogs, is baking through all of the breads in the Healthy Bread in Five Minutes book. For more information on the HBinFive baking group, check out BigBlackDog.
Posted by Unknown at 14:11