This Roasted Garlic Spelt Bread in a Pot is made with Healthy Bread in Five Minutes Garlic Bread dough.  It utilizes a mixture of spelt flour, ground flaxseed and all-purpose flour. I like spelt and roasted garlic so this seemed like a winning combination to me.

Spelt is an ancient grain that has a somewhat nuttier and slightly sweeter flavor than whole wheat flour. It is a distant cousin to wheat and can be used in many of the same ways as wheat, such as bread and pasta making.1  Spelt contains more protein than wheat, and the protein in spelt is easier to digest. This means that some people who are allergic to wheat may be able to tolerate spelt. Spelt has gluten, just like wheat, so spelt is not suitable for a gluten-free diet.2

Spelt performs better when mixed with other flours.  It has gluten but it is a very fragile gluten so it doesn't rise as well as wheat.  This is also what makes it more easily digestible than wheat for a lot of people.

This particular formula made a really wet dough.  After a few unsuccessful attempts to shape a free-form artisan loaf, I decided to bake the bread in my clay bread pot. 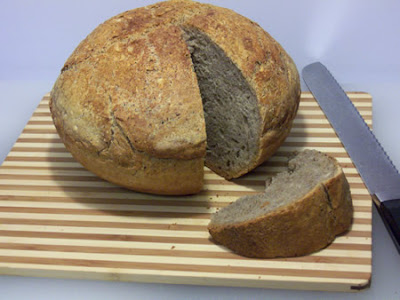 To begin the process, I roasted a large head of garlic in the oven.  Then I mixed together the ingredients, covered the bowl and allowed it to rest on the counter at room temperature for about 2 hours.  Then I refrigerated the dough for 2 days until I was ready to make the bread. 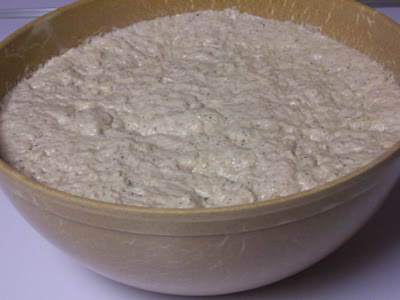 When I was ready to bake the bread, I removed it from the refrigerator and pulled off a 1-pound piece and proceeded to shape it into an oblong shape.  I had to add a good bit of flour to keep it from sticking to my hands, but it still didn't seem to hold it's shape very well. 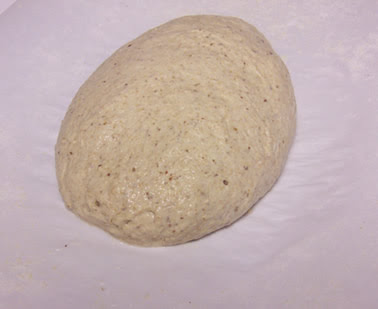 At this point, I decided to use the bread pot, so I put the dough in another bowl to rest while I preheated the bread pot in the oven. 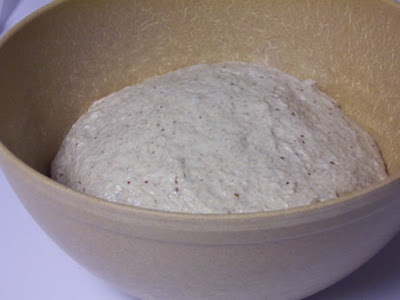 After the bread pot had preheated in the oven for about 30 minutes, I carefully placed the dough in the pot. 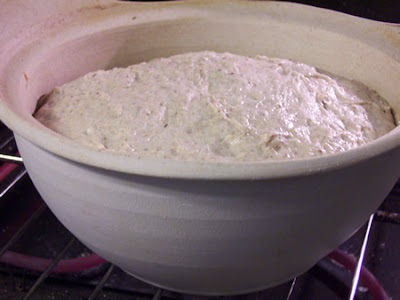 The dough was too wet to slash with a knife so I used scissors to cut an X on top.  I baked the loaf with the lid on for about 30 minutes. Then I removed the lid and baked it for another 15 minutes. 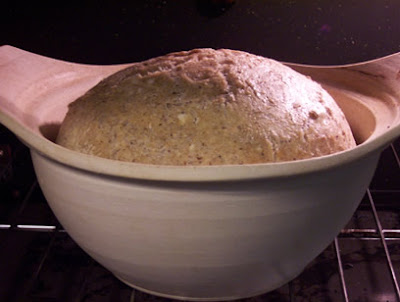 The last two breads I made in this bread pot were not completely baked through. So to make sure the bread was done this time, I stuck a skewer in the middle and when it came out clean, the bread was ready. If you look closely in the photo below, you can see the hole in the bread where I stuck the skewer.

When I removed the loaf from the oven, I let the loaf cool a bit in the pot.  I placed the pot on a cutting board draped with a towel so that it wouldn't break.  Extreme changes in temperature can crack clay pottery so I wanted to prevent that. 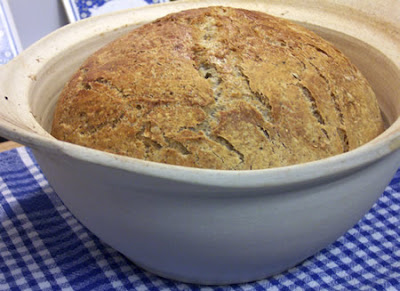 After the dough had cooled in the pot for a few minutes, I removed the loaf from the pot and let it cool on a wire rack. 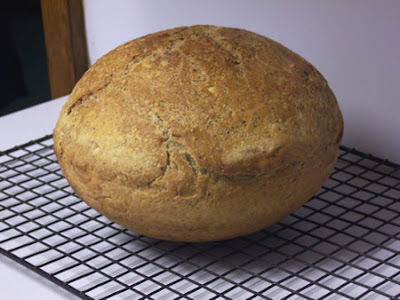 Then it was time to test this baby. You can make a parsley butter for this bread, but I dipped it in olive oil sprinkled with herbs instead.  It was yummy!

We enjoyed a slice with our salad for dinner.  It was really good.  The roasted garlic flavor really comes through in this bread.  It also gives the house a wonderful aroma - that is, if you like the smell of garlic.