I slow-roasted some of my heirloom black cherry tomatoes the other day, and I’ve been finding all sorts of delicious ways to enjoy them. So far, my favorite way to eat them has been as Bruschetta. 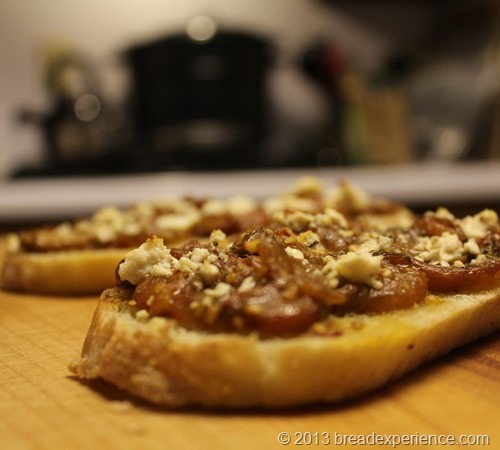 According to Wikipedia, “Bruschetta is an antipasto which originated in Italy in the 15 Century or earlier. Bruschetta consists of grilled bread rubbed with garlic and topped with olive oil, salt and pepper. It is usually served as a snack or appetizer.”  There are numerous variations for the toppings, tomatoes being one of the most common.

Italians may serve Bruschetta as a snack or appetizer, but I enjoyed it as a meal. I spread a couple of slices of bread with olive oil and then topped them with some roasted tomatoes, Italian herbs and feta cheese. I toasted the bread on a preheated baking stone until it was crispy and oh my!  I’ve enjoyed this for dinner several nights in a row.

The first time I made Roasted Tomatoes and Feta Bruschetta, I used a few slices from a crusty artisan boule and the next time, I used some of my favorite sourdough bread (which had been frozen for several months). Both versions tasted great. I served the frozen bread when a friend came over for dinner the other night. I thawed the loaf and prepared it in the same manner as before, and it tasted just as good as the first version. It was a great way to use old bread.

Preheat the oven to 400 degrees F. with a baking stone on the middle rack. Let it preheat for 30 minutes while you prepare the crostini.

Start with a loaf of crusty bread.  I used a round boule which I adapted from the Artisan Bread in Five Minutes Master Loaf formula.

Slice the loaf and brush the slices with olive oil. You can also spread garlic on the slices if you want. The slow-roasted tomatoes had garlic in them so I didn’t add any extra. 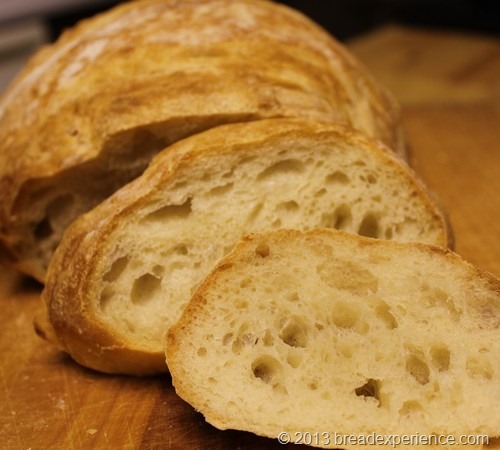 Add the toppings of your choice. I started with these roasted tomatoes. Then I added some Italian herbs and feta cheese. 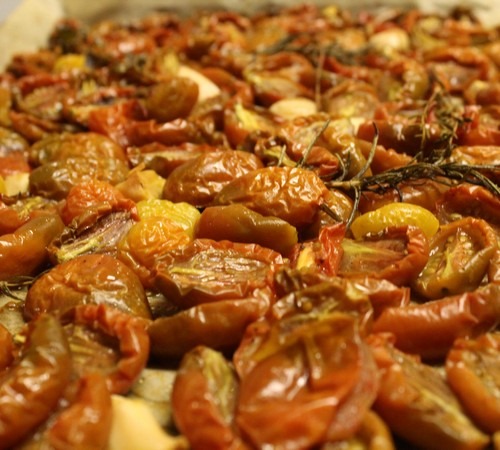 Toast it in the oven on a preheated baking stone at 400 degree F. for a few minutes until it is crispy on the bottom. Remove the slices and let them cool slightly before serving. Just cool them long enough so you don’t burn your tongue. They should be enjoyed warm. 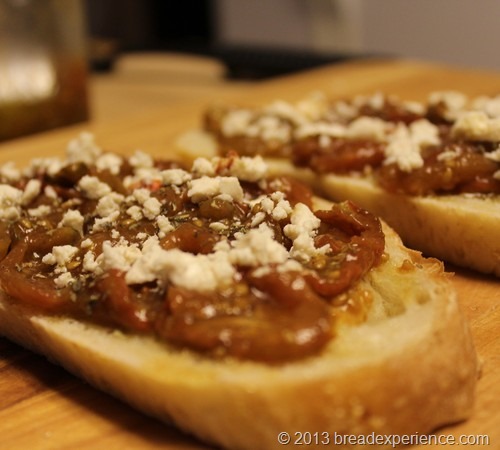 By the way, my friend took one bite of the Bruschetta and his face lit up. He said, “Ohhh!” I just smiled because that was exactly my experience when I tried it.

He enjoyed it so much, he’s going to roast some of his heirloom tomatoes. He has an abundance and has been trying to keep up with them. This is a great way to use the tomatoes. I’ll even supply the bread.