A cracker it’s not, savory bread, it is…

I tried to make more sourdough rosemary lavish crackers yesterday, but the dough wouldn’t let me. It wanted to be bread. So I made Sourdough Rosemary Focaccia instead. 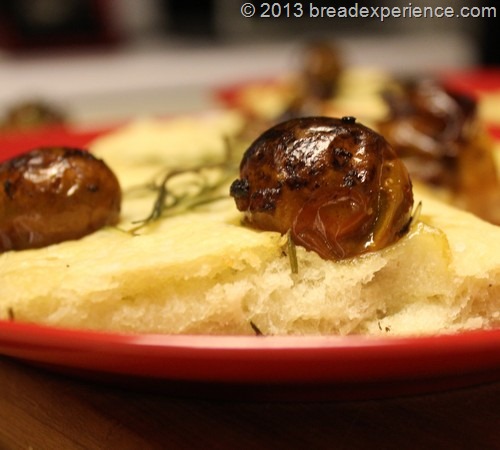 I was feeding my sourdough starters and decided to make crackers with the discarded sourdough. I had invited a friend over who likes sourdough bread so I thought I would introduce him to the Sourdough Rosemary Lavish Crackers topped with roasted tomatoes. I had just slow-roasted some more tomatoes from my garden so I needed to use them up.

I had a little more discarded starter than I had used in the original cracker recipe so I tweaked the recipe a bit to include more starter and flour, etc., but when I mixed all of the ingredients and felt the dough, it wasn’t cracker dough. No, this was different. It was so smooth and buttery (I mean olive oily) and workable. I just knew it wasn’t meant for crackers. This was bread dough. Flatbread dough to be sure.

The good thing about this dough is it is versatile. If you want to make focaccia, use the version below.  If you prefer to make crackers, use the cracker version.

1) Preparing the sourdough starter for use in the focaccia:

Remove the starter from the refrigerator, measure the amount needed, and let it warm up to room temperature. If you don’t have enough starter for this recipe, use this method to activate and increase your starter.

Stir the sourdough starter and oil together in a large mixing bowl using a wooden spoon or Danish dough whisk.

Add in the dry ingredients (flour, sugar, salt and rosemary) and mix until thoroughly blended.

Let the dough ferment for 2-3 hours at room temperature. Do a fold after the first hour. The dough should double in bulk. 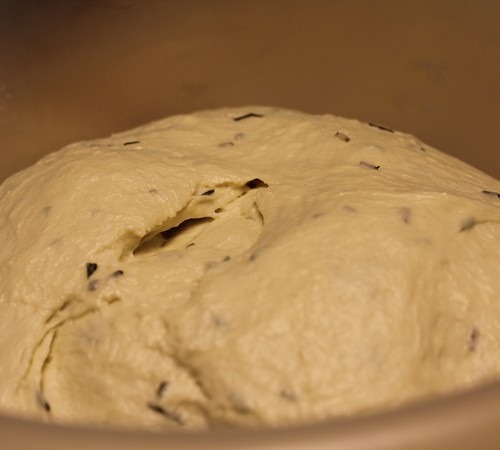 Preheat the oven to 450 degrees F. with a baking stone on the middle rack.

Spray a piece of parchment paper with olive oil.  Remove the dough from the bowl and shape it into a ball.  Place the ball on the parchment paper.  Let it rest for about 5 minutes.

To make small focaccias, cut the dough in half and cover one half while you’re preparing the other one. 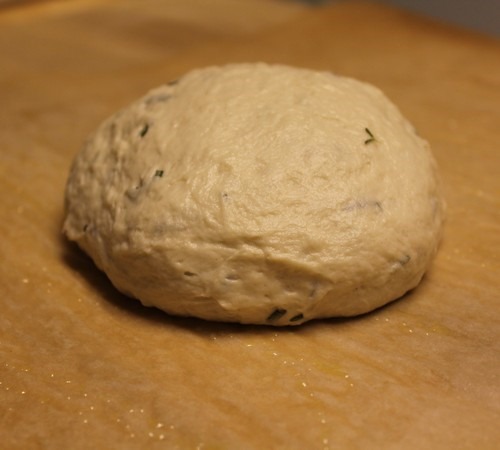 5) Shaping and Topping the Focaccia:

Using lightly oiled fingers, spread the first ball of dough into an oval shape on the parchment paper.

Drizzle more olive oil over the top and press lightly with your fingertips to make indentions in the dough.

Sprinkle kosher salt over the top and place the roasted tomatoes evenly around the edges and middle of the focaccia.  Press them gently into the dough. Drizzle with more olive oil, if desired and garnish with fresh rosemary. 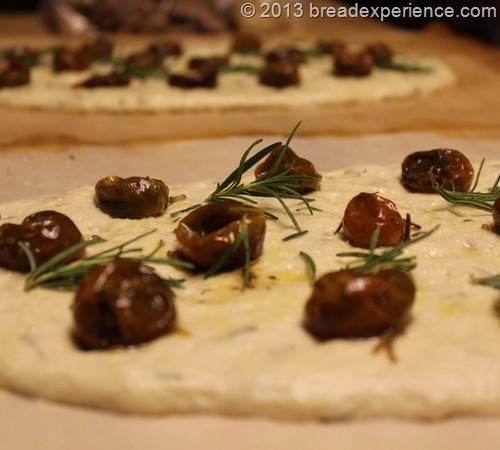 Slide the focaccia onto the preheated baking stone using a pizza peel or the back of a baking sheet.  Bake until it is golden brown about 20 – 25 minutes.  Remove the parchment paper partway through baking to make sure the bottom get’s baked through and evenly browned.

Remove the focaccia and let it cool slightly before serving.  You can slice it or break off pieces to serve.

The roasted tomatoes puffed up during baking. It was pretty cool. 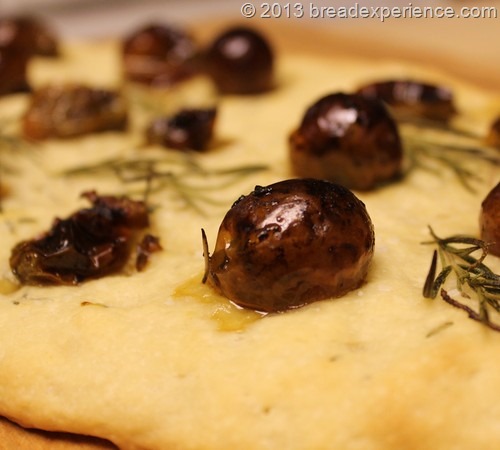 Someone told me recently that bread just wants to be, well bread. I agree. There’s no doubt that this dough wanted to be bread. It looked like it, smelled like it, felt like it, and ultimately, it was, bread. So I let it be bread.

And, since this savory Sourdough Rosemary Focaccia is not a cracker, I’m submitting it to the Twelve Loaves challenge for August.