Oatmeal Bread with Cinnamon and Raisins is one of the breads on the list for the Mellow Bakers for August. I was really looking forward to making this bread. My youngest son is home from college for a couple of weeks and oatmeal bread happens to be one of his favorites. The timing was great!

Oatmeal with cinnamon and raisins is delicious and healthy in and of itself, but when you add the combination to bread, you’ve got yourself a pretty awesome treat. I thought this would make some exceptional cinnamon toast so I baked the loaf in a Pullman pan. 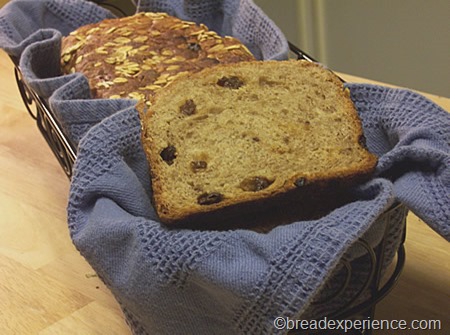 Instead of using high gluten flour and whole wheat flour as per the original formula, I used Super SproutTM flour and bread flour along with the rolled oats. Super SproutTM is a whole grain organic wheat that has been sprouted using a proprietary method and milled into flour for baking. The wheat flavor of this sprouted flour is deeper, smoother and more well-rounded than plain whole wheat flour.

As I mentioned in a previous post on Whole Wheat Bread, I learned about Super SproutTM at the Asheville Bread Baking Festival during Peter Reinhart’s workshop.  This flour is milled by Lindley Mills. I’m not sure if it is readily available yet, but it is supposed to be in markets soon.

I let this loaf cool for several hours, then put it in a plastic bag until the next day. Then I sliced it and enjoyed it toasted. As I suspected, it makes delicious cinnamon toast. My son had 5 slices in one sitting.  His metabolism still works so he can do that and go out and run it off.

Mellow Bakers was started by Paul at Yumarama.
We’ve been baking breads from Bread: A Baker’s Book of Techniques and Recipes by Jeffrey Hamelman.