This Three-Stage 90% Sourdough Rye Bread is one of the Mellow Bakers’ breads for January. It is made using the Detmolder method of rye bread production. I had never used this method before so I was a little bit hesitant to try it, but once I started, I had fun with it. 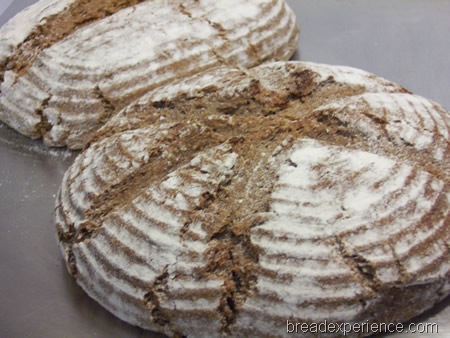 The formula and instructions for making this Three-Stage 90 Percent Sourdough Rye Bread can be found on page 201 of Bread: A Baker’s Book of Techniques and Recipes by Jeffrey Hamelman.

The Detmolder method of making sourdough rye bread was developed in Germany.

According to Jeffrey Hamelman,

“The Detmolder method is a fascinating and highly effective technique that represents the highest expression of the baker’s skill. In the Detmolder system, the sourdough is built up in three phases, each favoring the development of one aspect of the sourdough. Paying careful attention to the time and temperature requirements of each phase is necessary in order to obtain the highest-quality results.”

The dough was rather wet so I used my banneton baskets to proof the loaves.  I shaped one loaf into an oval and the other into a round loaf. 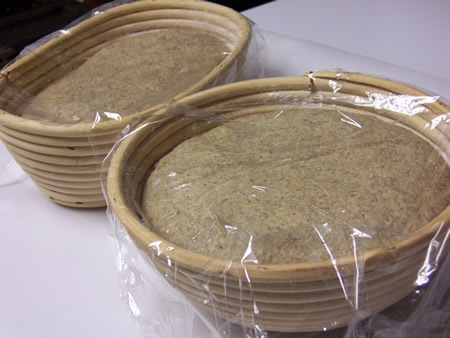 I was very pleased that the loaves came out of the baskets without sticking. 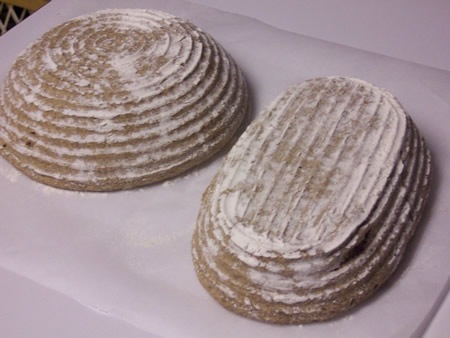 The directions say to score the bread using a dough docker.  I don’t have such a tool so I made up my own scoring for these loaves.  I scored the oval loaf right down the middle. 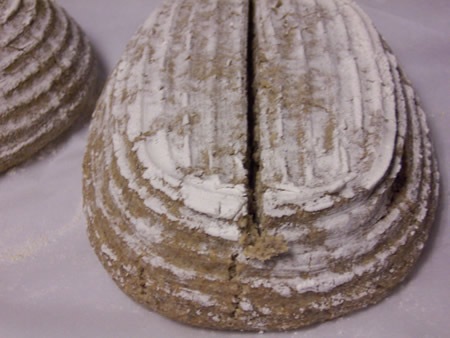 Then I scored the round loaf with a series of slashes starting from the middle. 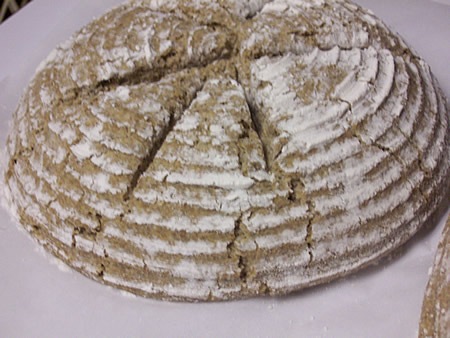 I baked the loaves on a baking stone with a steam pan underneath. 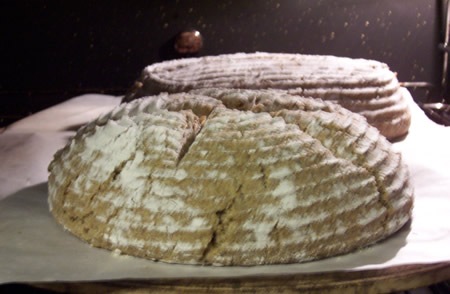 After the loaves had finished baking, I let them cool completely on a wire rack. Then I placed them in a linen cloth and let them rest on the counter for 24 hours before I sliced them.  This step is supposed to stabilize the crumb. 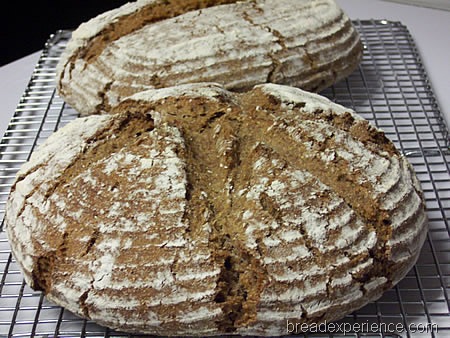 I enjoyed making this Sourdough Rye bread and was pretty pleased with the results.  However, at this point I was thinking, “now what do I do with them?”  I haven’t quite developed a taste for these types of breads so I didn’t think I could give them a fair analysis. 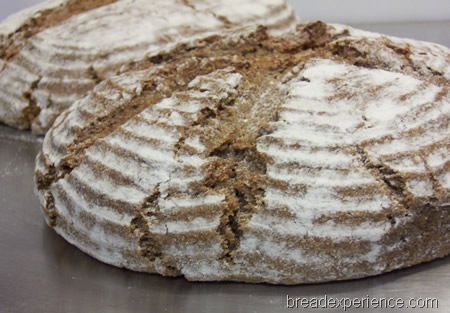 I decided to give one of the loaves to a friend of mine to taste test for me.  He’s originally from Eastern Europe and I knew if anyone could give me a proper assessment of the taste, he could.  When it comes to rye breads, particularly a sourdough rye, I knew he would give it a fair chance. He loves sourdough and has been testing my sourdough breads for several years.  I gave him a loaf of the sourdough rye bread and he enjoyed it immensely.  He said, “this is good stuff”. He also sent me a text the next day to say how much he enjoyed it. I believe that qualifies as a thumbs up.

The Mellow Bakers are baking breads from Bread: A Baker’s Book of Techniques and Recipes by Jeffrey Hamelman. Feel free to join us.