Today we’re featuring Pumpernickel Bread, the 34th bread in the BBA Challenge.  I had fun making this bread!  I made it during my marathon baking session last weekend. It was really easy!  I also tried a new steaming technique that involves a roasting pan.  Read on for more details…

“Pumpernickel bread is a form of German bread, referenced at least as far back as the 1450s. It is characterized by its dark color, virtually no crust and its rye taste. The traditional method for producing pumpernickel bread is to combine course and fine rye flour with a sourdough starter and sometimes yeast. The bread then undergoes a slow cooking process, which can last up to 24 hours. Cooking temperature is usually under 300 degrees F (149 C), and results in a dark brown or almost black colored bread.” 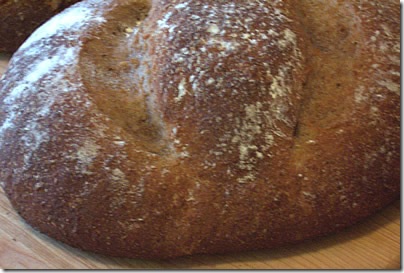 The method we used to make this bread does not involve slow cooking it for 24 hours.  However, it still produces a good loaf in my opinion.

Like some of the other bakers in the challenge, I was unable to find pumpernickel flour, so I used stone ground rye flour instead.  I also used cocoa powder for the coloring rather than instant coffee.  Hey!  If I have a choice that involves any form of chocolate, well guess what I’ll choose!

Begin by making the starter the day before you want to bake the bread. Mix together the barm, rye flour, and water in a bowl to make a wet, pasty barm. 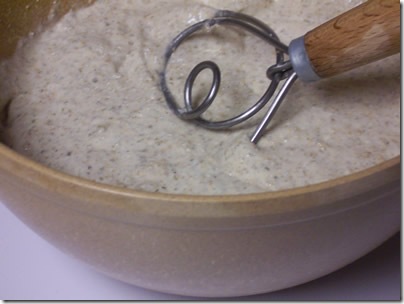 Let the starter sit for 4 to 5 hours, or until it becomes bubbly and foamy.  Then, put it in the refrigerator overnight.

The next day, remove the rye starter from the refrigerator an hour before you want to make the dough. 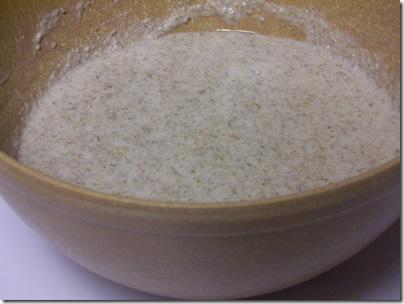 Stir together the flour, sugar, cocoa, salt, and yeast in a mixing bowl.  Then add the rye barm, bread crumbs (I used the crumbs I made from the Sourdough Rye & Spelt Bread), and oil and mix until all of the ingredients form a ball.  Add more flour or water if necessary. 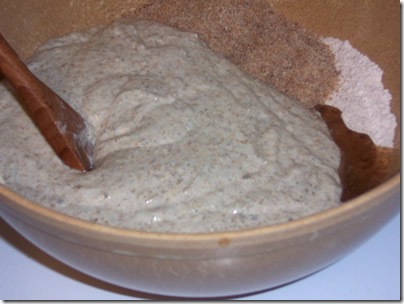 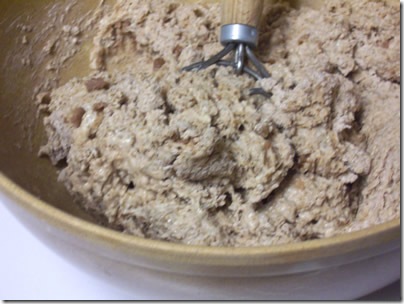 Transfer the dough to a counter sprinkled with bread flour.  Knead it for about 6 minutes, adding flour as needed to make a smooth and pliable dough – tacky but not sticky. 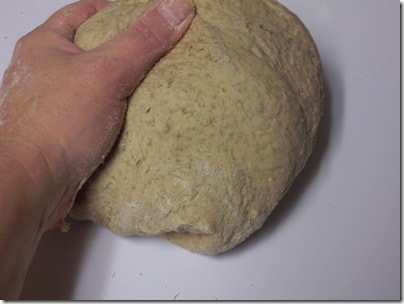 Lightly oil a large bowl and transfer the dough to the bowl.  Roll it around to coat it with oil, then cover the bowl with plastic wrap. 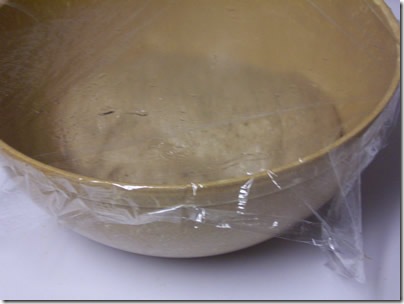 Let the dough ferment at room temperature for 2 hours, or until doubled in size.

Transfer the dough to a counter sprinkled with flour, being careful not to degas it too much.  Divide the dough into two pieces and shape them into boules.  Or, if you prefer, you can shape them into loaves and bake them in loaf pans. 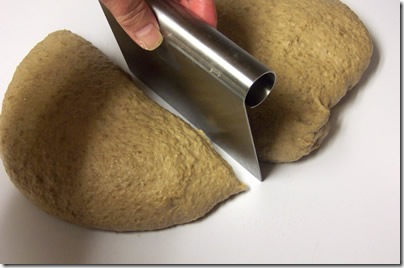 Preparing the loaves for baking

To bake these loaves, I decided to use a couple of different steaming techniques rather than using a baking stone and a steaming pan underneath.

For one loaf, I used my La Cloche.  To prepare it, I greased the bottom with coconut oil and sprinkled it with cornmeal.  Then, I transferred the dough to the La Cloche, misted the top with cooking spray, and covered it with plastic wrap and let it proof. 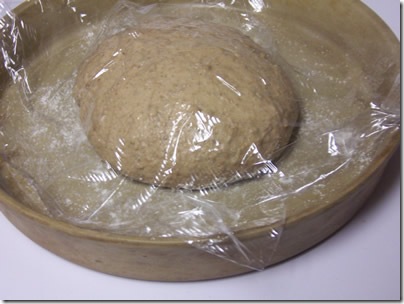 For the other loaf, I decided to try a method I had read about on a couple of different blogs. It involves using an aluminum roasting pan over the bread to provide steam rather than having the steaming pan underneath. Peter Reinhart had made reference to this method on his blog a few weeks ago.  Then Paul with Yumarama, provided a photo tutorial and explained the technique on one of his recent posts.  So I decided I would give it a go.

I placed the second loaf on parchment paper sprinkled with cornmeal and covered it with plastic wrap and let it proof. 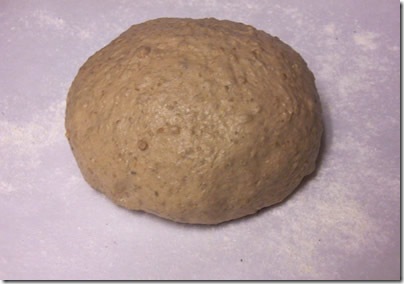 I proofed both loaves at room temperature for about 90 minutes until the dough rose to about 1 1/2 times its original size.

I decided to bake the second loaf first since the baking stone needed to preheat.  To prepare the oven, I placed a baking stone on the middle rack and preheated the oven to 450 degrees F.

Then, I scored the loaf.  I decided to do something different with the slashing just to see how it would look. 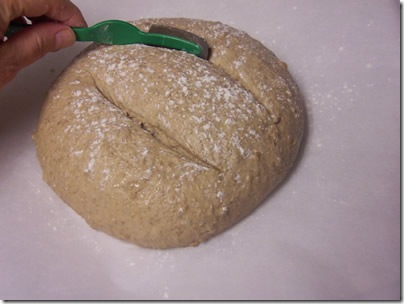 Then I transferred the loaf to the baking stone 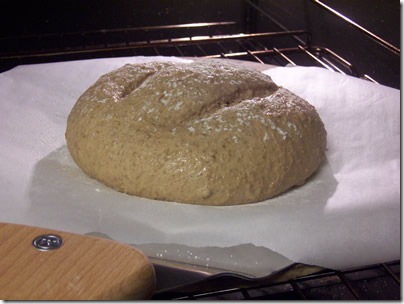 and placed the roasting pan on top. 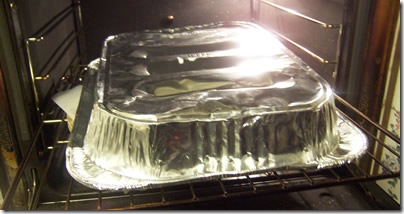 At this point, I lowered the oven to 400 degrees and baked the loaf for 10 minutes.  I checked the loaf and rotated it 180 degrees for even baking and continued baking the loaf for about 10 or so more minutes.  I should’ve removed the roasting pan at this time, but I didn’t.  As you can see, the loaf got a little bit too brown.  Oops! 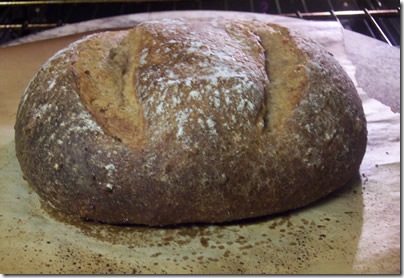 So I removed it from the oven, and let it cool on a wire rack while the other loaf was baking.

Now, it was time to bake the other loaf in the La Cloche. I removed the baking stone and the middle rack (carefully) from the oven and turned the oven back up to 450 degrees so it could preheat at the higher temperature.  Then, I scored the loaf. 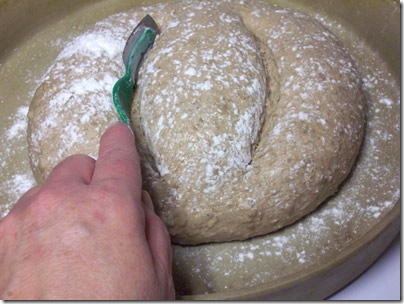 When the oven was ready, I placed the La Clothe on the bottom rack. Then I put the lid on to create the steam. 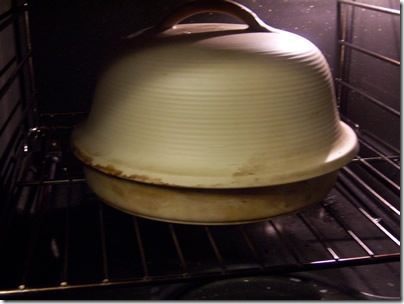 I reduced the heat to 400 degrees at this point and let the bread bake for about 10 minutes.  I took the lid off to check the loaf, then I let it bake for another 10 minutes or so until it was a beautiful brown color and sounded hollow when thumped on the bottom.  I used cocoa powder rather than coffee granules to produce the brown coloring. 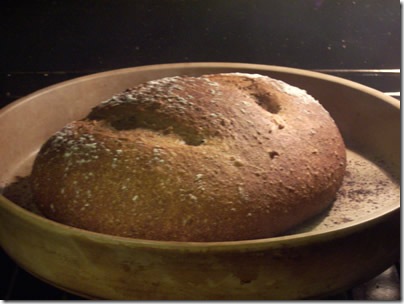 Then I removed it and let it cool on the wire rack with the other loaf. 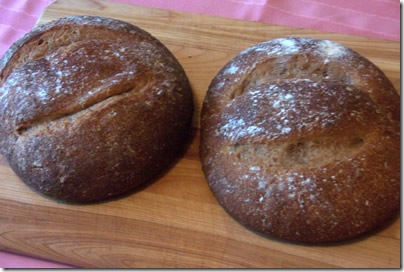 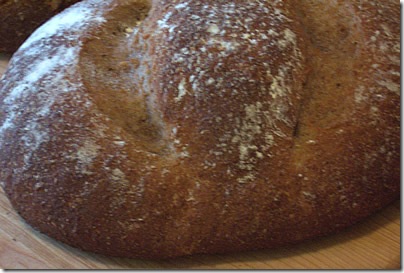 I also liked the crumb!  It was tender and moist and the slices tasted great warm with butter.  See the slice in the photo below, I had that one for my afternoon snack. Yummy! 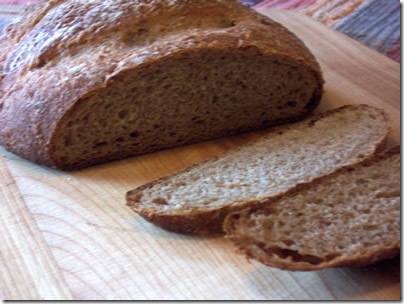 By the way, this bread freezes pretty well.  As I mentioned, I did a marathon baking session last weekend and this is one of the breads I made during that session.  I froze it because I had too many breads at one time.  I thawed it a few days later to get a shot of the crumb and do a taste test.  The bread tasted great!

That’s about it for this bread!