For some reason, that nursery rhyme pops into my head every time I think about this Aloo Paratha. I suppose it’s because it’s stuffed with a mixture of peas, potatoes and curry.  I even had my boyfriend singing the rhyme the other night while I was making it.  We were quite the pair.

This is another bread I almost didn’t make. It’s not that I didn’t want to. I had all the ingredients and I had even made the ghee, but I just wasn’t in the mood the night I planned to make it. However, I had invited my boyfriend over for dinner and he thought the Aloo Paratha sounded really good so I made it anyway.  I’m glad I did.  We both enjoyed it!

This version of Aloo Paratha is made using the Healthy Bread in Five Minutes 100% Whole Wheat Olive Oil Bread dough. 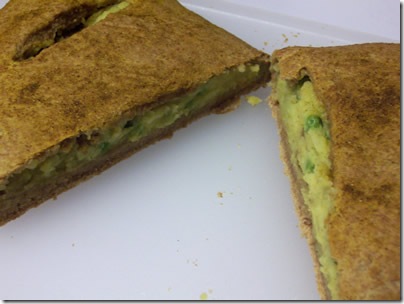 Aloo Paratha uses ghee (instead of butter) which I thought might be hard to find until I learned how easy it is to make. Ghee is basically just clarified butter. To make it, just heat unsalted butter until it melts, bring it to a boil and cook until it is frothy.  Then cook it gently until the milk solids float to the bottom of the pan.  Strain it, cool completely, then put it in the refrigerator until you’re ready to use it.  It will last for a month in the refrigerator.

I had already weighed out the dough a couple of days earlier when I made the 100% whole wheat with olive oil bread so I just took out the remaining piece and formed it into a ball. 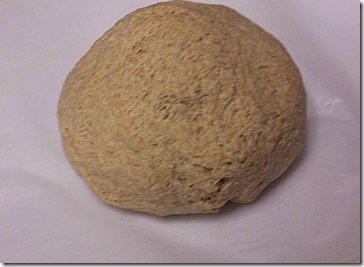 Then, I used my palms and the rolling pin to get the dough rolled out to about 1/8-inch thick.  I also put it on a greased piece of parchment so it would be easier to work with and transfer to the baking stone. 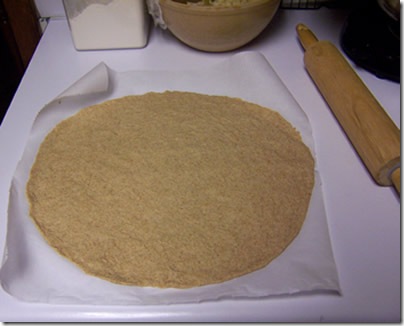 Then I spread the mixture of mashed potatoes, curry, ghee, neutral-flavored oil and peas on one side.  I used frozen peas and didn’t even have to thaw them.  I thought it might make it too watery but it didn’t. I kind of spread it over more than half, but it was ok. 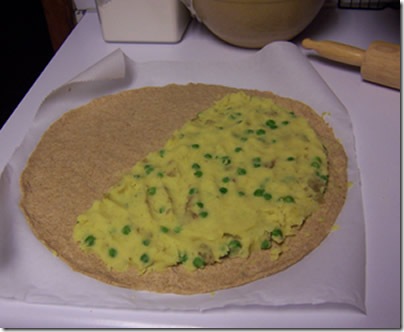 Then I brushed the outside edges with water and folded the other half over and sealed it by pinching it closed with my fingertips. 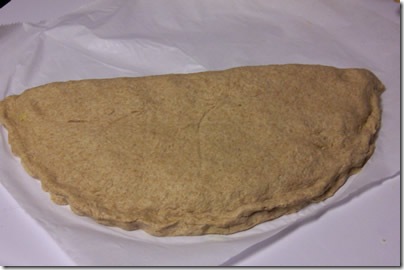 Then, I brushed the top with more ghee and sprinkled on more curry. 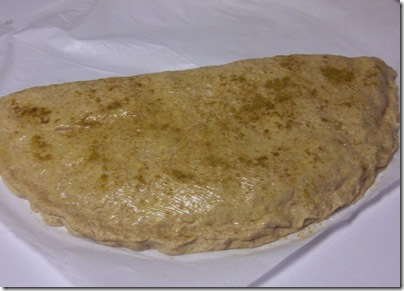 Using a serrated knife, I cut 3 slits in the top crust, all the way through the top layer of dough. 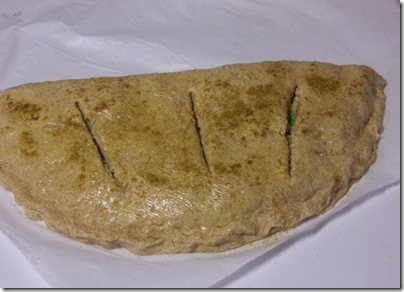 Then I slid it onto the baking stone (in the preheated oven) with the steam pan underneath. 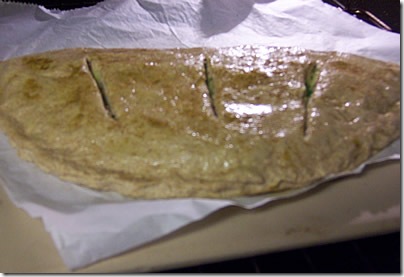 And, baked it for about 35 minutes, until it was golden brown. 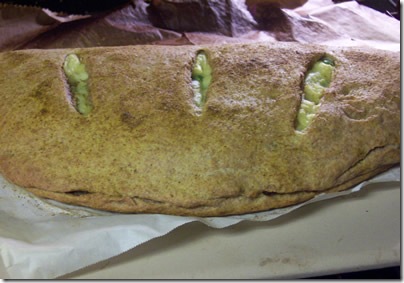 Here it is.  I think it’s kind of neat with the mashed potato mixture peeping out from under the slits. 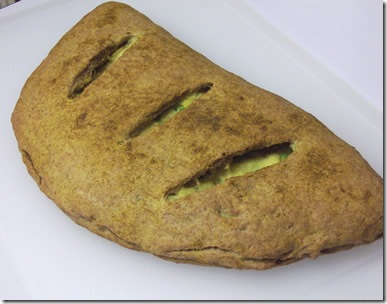 It turned out a little bit crunchy on the outside which I liked because if offset the soft inside.  My boyfriend and I were very pleased with this bread.  We really liked the flavor.  It was filling as well.  It wasn’t too filling, but we didn’t need anything else with it and we only ate half of it.

I really liked this version of Aloo Paratha.  It had a wonderful flavor.  However, I’ve never had this before so I would like to try an authentic version.  It just so happens that one of the other bakers in the HBinFive group is from India and she has a more traditional version of Aloo Paratha, on her blog My Diverse Kitchen.  I’ll have to try that one.  It sounds really good.

Thanks for joining us in the bread-baking blog.  Look for more breads from the Healthy Bread in Five Minutes Baking Group.

The HBinFive Baking Group, started by Michelle of Big Black Dogs, is baking through all of the breads in the  Healthy Bread in Five Minutes book. For more information on the new HBinFive baking group, check out Michelle's blog.