This Seeded Rye Loaf is another one of William Alexander’s breads from the May Issue of Saveur Magazine. This bread takes 11 days to make. However, the time spent each day is negligible. For the first 9 days, you build the rye starter with a mixture of rye flour and water each day, then on day 10, you build a sourdough culture using the rye starter, more rye flour and water. 24 hours or so later, you make the rye loaf. If you already have a rye starter, then you can reduce the time needed to make this bread to less than 2 days. 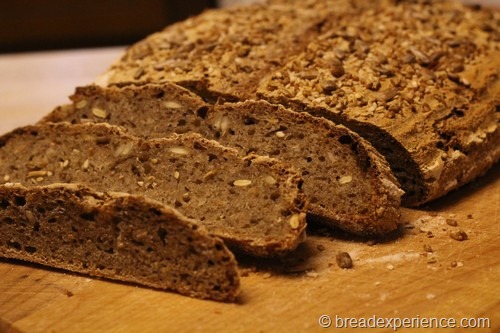 Making this starter was good timing. One of the breads on the list for the Mellow Bakers this month is Whole Grain Rye Bread, and I needed a rye starter for that bread. I could’ve converted my regular sourdough starter to a rye starter or used my existing rye starter; however, I hadn’t fed my rye starter since last December. Oops!

I decided I would just start all over. If you haven't noticed, I like building starters and having experiments all over the counter.  So that’s what I did. Ten days later, I had this delicious rye bread. Never thought I’d say that.  I definitely have become a rye convert.

Here is a photo tutorial of the process for making the Rye Starter and the resulting Seeded Rye Loaf.

I didn’t follow his process completely for proofing and baking the loaf. He puts the loaf in a floured kitchen towel in a colander. I used a brotform basket to proof the loaf instead.  He made a round loaf; I made an oval loaf. I did bake the loaf on the baking stone and tried his method of using an iron skillet underneath with ice cubes in it. I wasn’t sure about the whole ice cube in the iron skillet thing. I didn't want to ruin my skillet so I used one of my small cast iron skillets that I don’t use much. It did okay but I’ll probably stick with the steam pan underneath.

I let the loaf sit overnight before slicing it. This Seeded Rye Loaf has tangy undertones due to the rye levain. Not too sour. I like it!  I like the use of seeds in the dough and on the crust. It provides a unique texture and flavor. I’ve enjoyed it with cheese for a light lunch with a salad or an afternoon snack.

I hope you enjoy it as well.