For the past several years, I’ve grown a small vegetable and herb garden in my back yard and in pots on the deck and on the front walkway. Last year I lost the squash plants to the squash borer and squash bugs so this year, I decided to grow most of the cucumbers, and all of the squash and zucchini in big pots rather than in the ground. So far the squash and cucumbers are bug free and doing really well. So well in fact, that it’s only May, and I’ve got cucumbers all over the place. 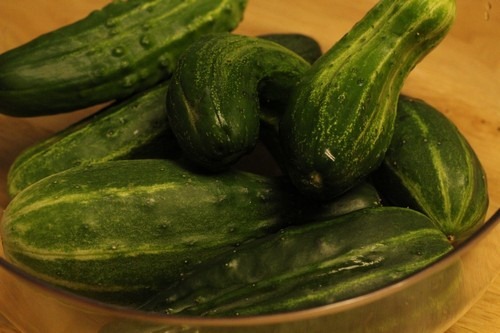 I like cucumbers and I enjoy eating them fresh from the garden and in salads, but you can only eat so many before you get “cucumbered-out”. So I started looking for creative ways to use them. Although I have more cucumbers than one or two people can eat, I didn’t have enough to make a big batch of pickles. Plus, these aren’t my pickling cucumbers, these are Heirloom Spacemaster pickles. They’re crispy and taste great as cucumbers, but I wasn’t sure how they would hold up as pickles.

I searched and searched through my canning books and online to find a recipe for a small batch of pickles. I learned that slightly overgrown pickles that are too big for pickling whole make great refrigerator pickles. I found three refrigerator pickle recipes that could be scaled to a small harvest. I took what I liked from each recipe and came up with my own version. 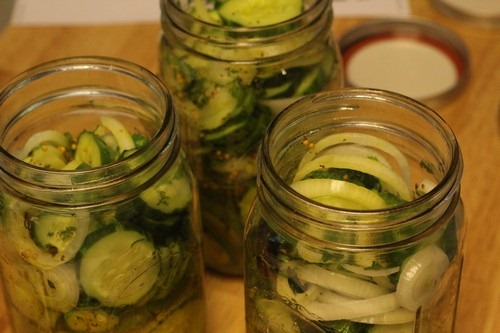 Adjust this recipe for the amount of cucumbers you have on hand. Most of the recipes I saw used anywhere from 2 medium cucumbers to 6 cups. I used what I had and it ended up being almost 8 cups.

Slice the cucumbers and onions and layer them alternately in quart-size canning jars. You’re allowed to eat some as you chop. 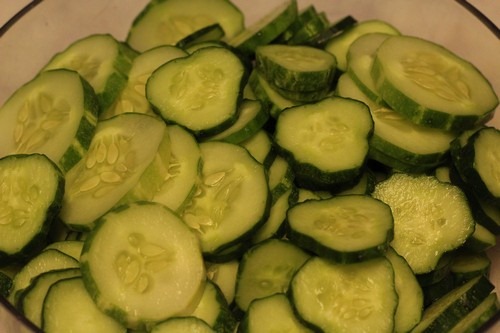 Combine the sugar, vinegar, salt and spices in a non-reactive saucepan and bring to a boil.  Stir until the sugar dissolves. Pour the syrup over the vegetables completely filling the jars. 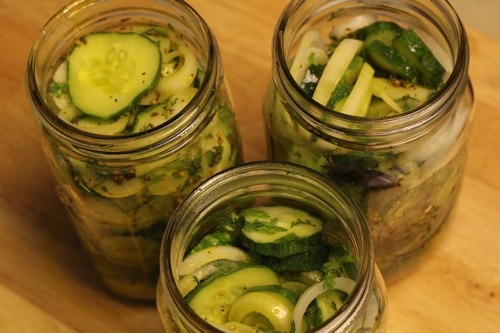 Allow the pickles to cool to room temperature before topping off with any remaining pickling liquid. Refrigerate. 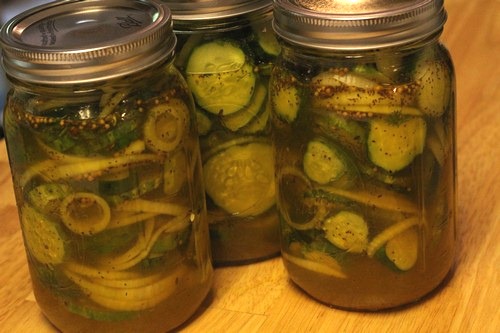 I probably should’ve stuffed the pickles into two jars instead of three so once we ate some of them, I combined the rest into two jars.

These pickles are so good! They’re sweet, but not too sweet! I was hesitant to add a lot of cilantro but it definitely would’ve enhanced the flavor. I loved the addition of cilantro. I got the idea from Jon of Doughmesstic.com. He used a bunch.