It was my turn to choose the bread and flavor for the May 30th Baking through Flatbreads and Flavors FB Group. I had a hard time deciding what to pick until I ran across the Moroccan Anise Bread. One of the suggested dishes to accompany the bread was Chicken Tagine. The anise flavor in the bread and the spices used in the Chicken Tagine sounded so different yet tantalizing that I decided this was the dish to try. Moroccan dishes can include up to 30 different spices, but don’t worry, this version only uses 6 different spices, lemon zest, garlic and cilantro. 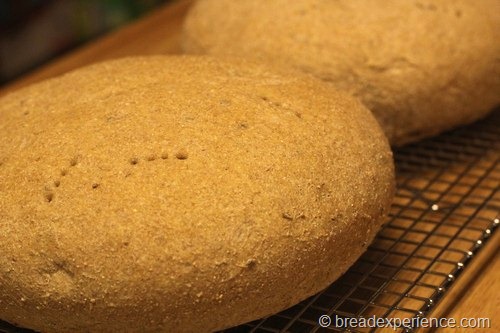 The day I originally planned to make this meal, I was too exhausted from work and other activities to cook so we went out to eat instead. We ended up eating Thai that night, but during the course of the evening, my taste tester, Joe, started talking about an episode of America’s Test Kitchen he just watched and as it turns out, they made Chicken Tagine. I said, “that’s what I was going to make!”  He’s like “Really!  I didn’t know that’s what you were going to make.”  I guess I hadn’t told him. We decided to make it together another day.

We made this meal this past weekend and it was divine. I got the marinade going and did some of the prep work ahead of time and when Joe got there, I put him to work. He cooked the chicken tagine and I made the bread. It was a fun evening! We really enjoyed this dish. I hope the other bakers like it as well. 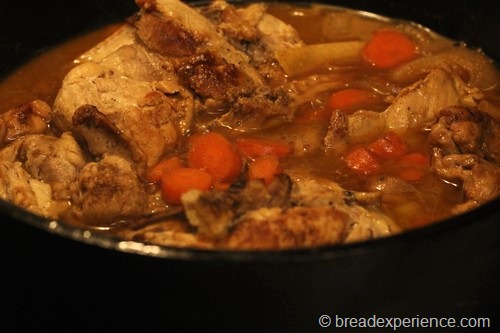 The recipe in the Flatbreads and Flavors’ book calls for parsley and jalapenos which I didn’t have, and the Test Kitchen recipe called for cilantro which I did have so I used the combination of spices and ingredients that I had on hand and incorporated part of the process from each recipe to create the final dish.

*We used the reserved marinade instead of squeezing more lemons.

Place the chicken pieces in a large nonreactive bowl, add the lemon juice and garlic, and toss to coat.  Let the chicken marinate in the refrigerator for 1 hour, turning occasionally.

Meanwhile, combine the spices in a small bowl and set aside.  Mince 1 strip of lemon zest; combine with 1 teaspoon minced garlic and mince together until reduced to a fine paste; set aside. Adding a little bit of kosher salt makes it easier to incorporate the garlic and lemon zest into a paste. Watch this video to see how it’s done.

Season both sides of the chicken pieces liberally with salt and pepper. Heat oil in large heavy--bottomed Dutch oven (we used my Cast Iron Dutch oven and it worked great) over medium-high heat until beginning to smoke. Brown chicken pieces skin side down in single layer until deep golden, about 5 minutes; using tongs, turn chicken pieces and brown on second side, about 4 minutes more. Transfer chicken to large plate; when cool enough to handle, peel off skin and discard. Pour off and discard all but 1 tablespoon fat from pot.

Add onion and the 2 remaining lemon zest strips to pot and cook, stirring occasionally, until onions have browned at edges but still retain shape, 5 to 7 minutes (add 1 tablespoon water if pan gets too dark). Add remaining 4 teaspoons garlic and cook, stirring, until fragrant, about 30 seconds. Add spices and cook, stirring constantly, until darkened and very fragrant, 45 seconds to 1 minute. Stir in broth and honey, scraping bottom of pot with wooden spoon to loosen browned bits. Add thighs and drumsticks, reduce heat to medium, and simmer for 5 minutes.

Add carrots and breast pieces (with any accumulated juices) to pot, arranging breast pieces in single layer on top of carrots. Cover, reduce heat to medium-low, and simmer until instant-read thermometer inserted into thickest part of breast registers 160 degrees, 10 to 15 minutes.

Transfer chicken to plate or bowl and tent with foil. Add olives to pot; increase heat to medium-high and simmer until liquid has thickened slightly and carrots are tender, 4 to 6 minutes. Return chicken to pot and add garlic-zest mixture, cilantro, and lemon juice*; stir to combine and adjust seasoning with salt and pepper.

We served the Chicken Tagine with yellow squash and zucchini from my garden. 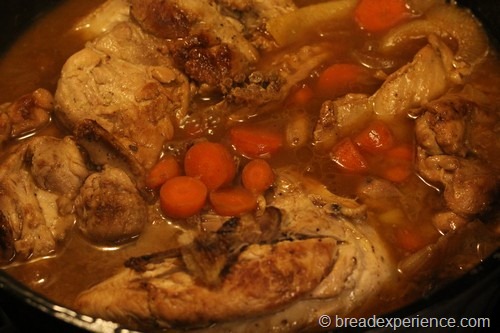 We sopped up the broth with the Moroccan Anise Bread.  The bread has a little bit of a licorice flavor from the Anise, but it’s not overpowering. 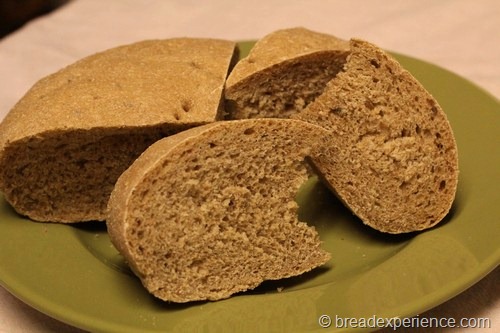 I’m so glad I chose this dish. The flavors of the Moroccan Chicken, squash and onions and the bread tasted really good together. You could also serve couscous with the chicken dish but since we were having bread, we didn’t need another grain.

If you’re looking for a recipe for the Moroccan Anise Bread, you might try this version from the New York Times  http://www.nytimes.com/2007/06/13/dining/133orex.html.  The NYT’s version is similar to the version in the Flatbread and Flavors’ book in that it includes whole wheat and white bread flour; however, the version in the book also includes some cornmeal.