Are you ready to Spar for the Spurtle? 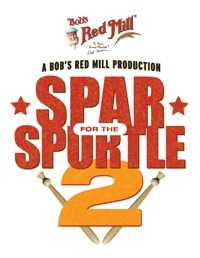 Bob's Red Mill, the leading provider of whole grain foods and official purveyors of the World's Best Oatmeal®, is again looking for someone to represent the company at the Golden Spurtle World Porridge Making Championship in Scotland this October. All you need is a winning recipe that makes use of Bob's Red Mill Steel Cut Oats!

Enter the contest!  It will be fun!

What is a Spurtle?

A spurtle is a Scottish kitchen tool dating back to the 15th century. It's a rod-like instrument that is traditionally used to stir porridge and prevent it from becoming lumpy. Tradition calls for using a spurtle only with your right hand and only in a clockwise direction otherwise, you risk invoking evil spirits and bringing on bad luck.

What is Spar for the Spurtle?

Spar for the Spurtle 2 Oatmeal Recipe Contest invites home cooks and professional chefs alike to submit videos demonstrating a unique recipe that makes use of Bob’s Red Mill’s Steel Cut Oats – the World’s Best Oatmeal. From the entries, three finalists will be flown to Portland, Ore. to compete in a live cook-off. The winner of the cook-off will receive an all-expenses-paid trip for two to Scotland, including $2,500 in cash, to help represent team Bob’s Red Mill in the 19th Annual Golden Spurtle World Porridge Making Championship!

See Highlights from 2011 Spar for the Spurtle.

Watch Merry Graham, the 2011 Champion, Spar for the Spurtle Adventure

When is the deadline to submit an entry?

To submit a recipe, watch and vote for videos, read the contest’s official rules and learn more about the World’s Best Oatmeal, please visit www.sparforthespurtle.com. The deadline for recipe submissions is July 20, 2012.

Be sure to read all the details, including the official rules on the About page, and if you need a little added inspiration, check out the above videos. When you've done so, you'll be ready to kick up your kilts and Spar for the Spurtle!