I’ve had a continuous supply of cucumbers this season from my cucumber plants. It’s been rewarding (and tasty) to watch the plants grow from seedlings into mature plants. I’ve enjoyed raw cucumbers, refrigerator pickles, and now this cucumber soup. I have more cucumbers so I’ll be looking for other creative ways to use them.

This Cucumber and Potato Soup is based on a recipe for Austrian Cucumber Soup.  The traditional version, known as Gurkensuppe in Austria, is thickened with a white sauce consisting of white flour, milk, lemon juice or white wine vinegar. Although that sounded interesting, I decided the version with potatoes sounded more appealing. So I made mine with potatoes instead of the white sauce. 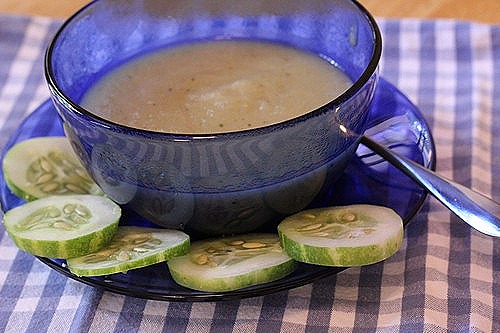 Adapted from: Soups by Marguerite Patten

Peel the cucumbers, but leave a few strips to provide flavor and color to the soup.  You can leave more of the peel, but it makes it slightly bitter. 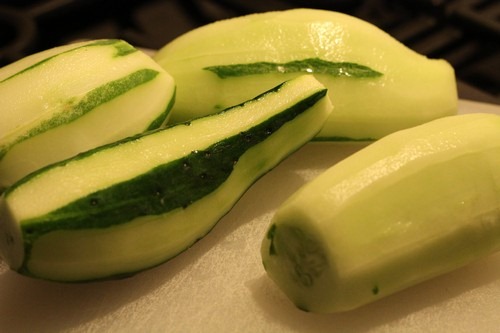 Chop the cucumber flesh into small dice. Peel and dice the potatoes, chop the onion, and dice the celery. Put the vegetables into a large pot along with the broth and a little seasoning and some tarragon.  Simmer for 15 to 20 minutes, or until the vegetables are tender. 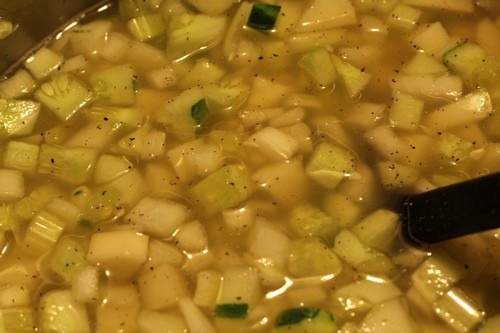 Place the mixture in the blender and blend until it becomes a smooth purée. Add more seasoning if needed.  Return the soup to the pan and add the milk. 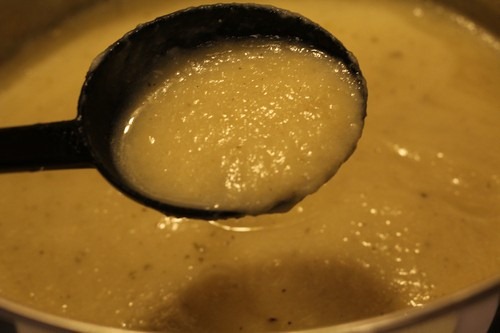 Ladle the soup into bowls and garnish with parsley or a little finely chopped tarragon if you like. I didn’t have any fresh tarragon so I added dried tarragon while the soup was simmering.  I added freshly ground black pepper as a garnish. 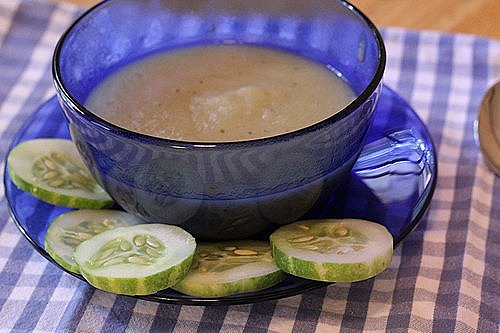 This soup is really good and freezes well. I like the combination of cucumbers and potatoes and the tarragon provides a nice bit of a kick. Very simple, yet tasty and satisfying.

You can also cook this soup in the microwave if you peel the cucumber completely. Otherwise, the skin will be slightly tough.