I had the opportunity to visit with my boyfriend's family this afternoon. The menu was varied and they left it up to my discretion as to what I wanted to bring.

Well, you know I'm always up for making bread. So, I decided to make Healthy Bread in Five Minutes Algerian Flatbread.  Hummus was also on the menu so I thought the Algerian Flatbread might go really well with it. 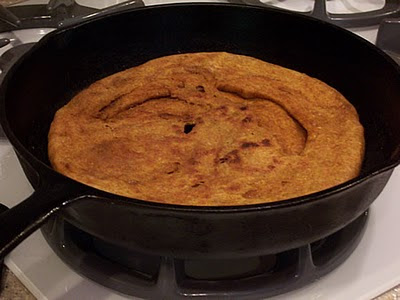 How to make this delicious bread:

The recipe for this Algerian Flatbread is found on page 228 of the Healthy Bread in Five Minutes book. For the dough, I used the 100% Whole Wheat Bread, Plain and Simple recipe (found on page 79), but you can also use 100% Whole Wheat Bread with Olive Oil recipe, or the Healthy Bread in Five Minutes Master Recipe for the dough.

I made the dough a couple of days in advance and let it ferment in the refrigerator until I was ready to use it.  I used home-milled whole wheat flour from hard red spring wheat.

When I removed the dough from the refrigerator, I cut off two 1/2 pound pieces, shaped them into a ball and put them in a plastic bag to transport to the get together.  The formula in the book calls for 1/4 pound pieces, but I had extra dough so I made them a little bit bigger. 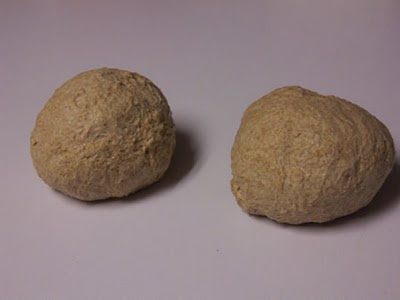 The dough and the rest of the ingredients are very transportable.  All I had to take with me, my Mise en Place, was the dough balls, cumin, paprika, cayenne pepper, turmeric, and kosher salt. The only thing I forgot was the rolling pin.  I put all of this in a plastic bag and was ready to go. 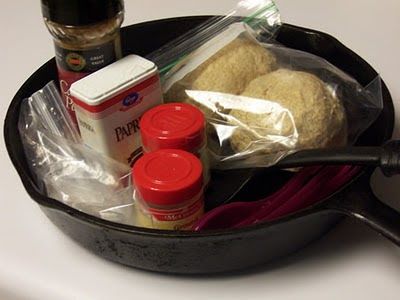 Once I got there, I mixed some olive oil with the spices.  I forgot to add the salt, but it really didn't need it. 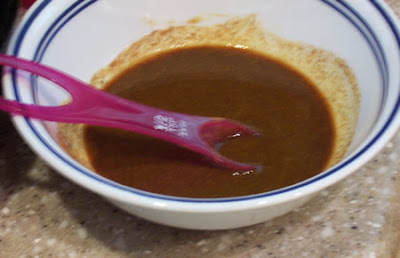 The dough had been resting while in transport so it was easy to work with once I got there. I rolled it into a circle to fit the cast iron skillet. I had to do this with my fingers since I didn't have a rolling pin. It worked just fine. I spread the spice mixture evenly over the top, leaving a 1/2-inch border. 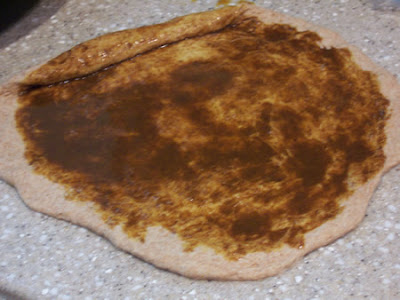 Then I rolled the dough up into a log. 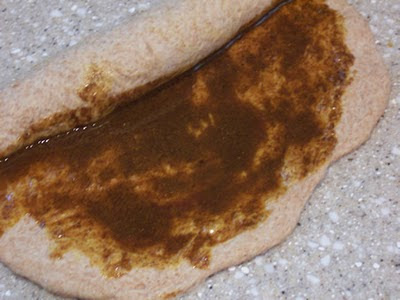 The spice mixture was really liquidy due to the olive oil so it oozed out as I was rolling it up.  It also made a big mess on the counter.  The next time I make this bread, I'll wear gloves and make sure I roll it out on something that I don't mind getting stained.  Fortunately the stains from the spices (cumin mostly) came off the counter. 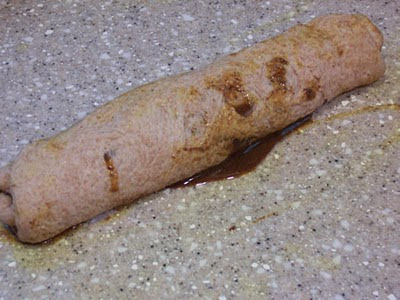 Next I coiled the rope (log) tightly around itself and placed it in the skillet to rest for about 20 minutes.  I didn't want to put it on the work surface since we had just cleaned it from the cumin stains. 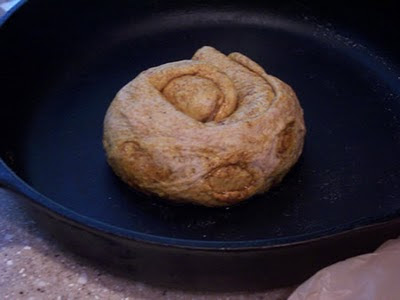 After the coil had rested sufficiently, I rolled it out into a circle again using my fingers.  This time, I used a plastic bag underneath so that it wouldn't get yellow stains on the counter. 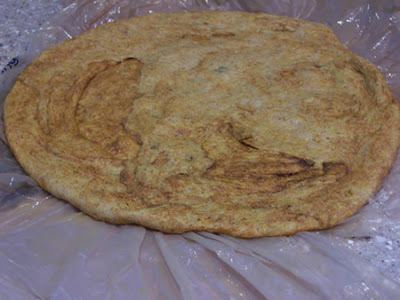 I baked the flatbread in the preheated skillet for about 2 to 5 minutes on the first side. 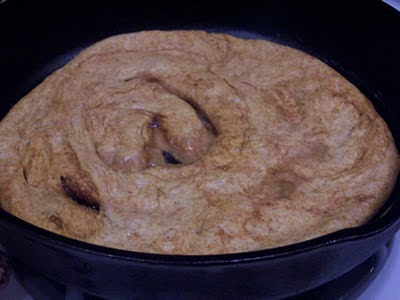 Then I flipped the msemmen when the underside was richly browned and continued cooking it another 2 to 5 minutes, until the second side was browned.  I had rolled my msemmen a little bit thick so I let it cook for a little while longer.

I let it cool slightly and I mean slightly, because I had people waiting with baited breath to eat it. Then, I cut it into slices. This bread is a wee bit spicy, but it went really well with the hummus. I didn't think to take a photo of a piece with hummus on it.  We were enjoying it too much. 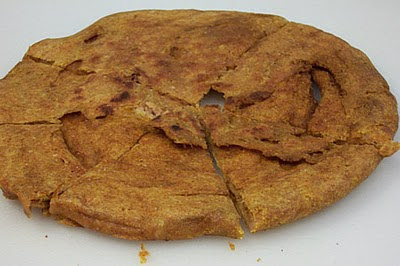 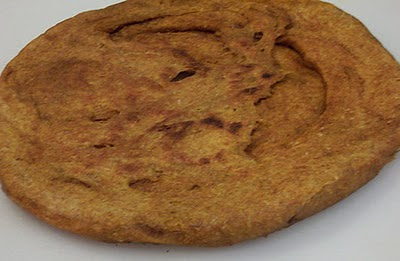 This is one time that the whole wheat flour did not overpower the spices in the bread.  It was really really good!  I got rave reviews from all of the taste testers.

Thanks for joining me in the bread-baking blog.  This flatbread has been YeastSpotted. Please visit Wild Yeast to view all of the lovely breads in the roundup.