Is Summer almost over already?  My, but time flies when you're having fun!  It's been a hot one but that hasn't stopped the BYOB Bakers from heating up their kitchens baking some fabulous breads.  I've been having lot's of fun in the kitchen this summer as well but mostly I've been having fun hosting the BYOB Summer Roundups.

If you are not familiar with Bake Your Own Bread (BYOB), it is a baking adventure that was started by Sandy of At the Baker's Bench.  It began in 2009 and due to it's success, continues in 2010.  Read more about BYOB here or click on the image below: 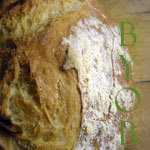 So, what has everyone been baking?


For starters, Sandy of At the Baker's Bench made Noon rogani ~ Azerbaijani Sweet Bread with a bit of a flair.  She embellished on the original recipe by adding an almond-butter-cream glaze and toasted sliced almonds to the cooled loaf.  Oh my!  This one is to die for.


And, then comes Andrea of  Family & Food.  Someone forgot to tell her that you're supposed to slow down during the summer.  Don't look at me, I'm not going to do it.  I enjoy reading about her bread-baking adventures too much.  Speaking of breads, for the Modern Bakers, she made Ginger Scones with Almond Topping, Cornetti, and Turkish Flatbread. It's too bad she didn't like these breads, they all sound delicious to me.  For the Mellow Bakers, she managed to bake three more breads: 70% Rye with a Rye Soaker and Whole-Wheat Flour, French Bread, and Bialys - a bakers trilogy. Her favorite was the Bialys. For the Bread Baking Buddies, she made Yeasted Sprouted Spelt Bread.  I like her variation on a theme.  I'll have to try that one again using spelt berries instead of wheat.  And last, but certainly not least, For The Daring Bakers, she made a decadent-looking Swiss Swirl Ice Cream Cake. Delicious!


Then Heather of http://girlichef.blogspot.com/ joined in the fun by making Stromboli. Or as she calls it bread stuffed and erupting with deliciousness!  Definitely!  She also served up some delicious Zucchini, Potato, Chipotle Tacos on Homemade Corn Tortillas and gave us a sneak peak at her garden.  Those tacos look so good and healthy and the photos of the garden are wonderful!


Margie of Tea and Scones decided to join the Artisan Bread Bakers in July.  She picked a good month. The featured bread was Noon Rogani.  You'll like her giant cinnamon roll with icing. Yum!  She also made Pannetone for the Slow and Steady BBA. This bread takes a few days to make but it is definitely worth the trouble.  Then she finished off the month by making Fried Squash Bread and Fry Bread for My Kitchen My World - America. A very informative post indeed!  Can you tell she's a teacher?


Diana of Di's Kitchen Notebook, made Pane Siciliano, both as a loaf and as pizza.  This is one of my favorite BBA Breads and the pizza looks scrumptious!  She also made some spur of the moment Semolina Sandwich Buns.  For spur of the moment, those buns sure do look inviting. I think she did plenty for her weekend off.  But, she saved the best for last.  There's no bread in this one, but cute pics of her girls making brownies.  And cute they are!  The brownies look delicious as well.


I'm so glad that Kira from Blogs From a Homesick Aussie decided to get back into baking and blogging.  Her son had a mate over and she wanted them to have something healthy to snack on so she made some delicious Homemade Granola Bars.  Lucky kids!  Sounds like a great snack to me.


Beth of KitchenCourage.com got muffin madness in July.  She made two sets of very healthy muffins in her heart- and star-shaped silicone forms: Rhubarb Pecan and Banana.  They both look and sound delicious. And, I love that muffin form!  She rounded out the month by baking 100% whole wheat bread from Healthy Bread in Five.  You'll like her resident bread connoisseurs/photo shoot assistants although Beth says they're very opinionated.


Verity of Nice Life with a Cup of Tea also caught the baking bug in July.  First she made a Semolina sourdough and orange currant and fennel loaf, then she made Chilli sourdough and sourdough muffins, and Nigella Lawson's brownies, and then Wholemeal Oat Yoghurt bread, and then she made some more bread: Sourdough sandwich loaf, and Peanut butter and oat slice.  I agree with Verity, sometimes you just gotta have chocolate things... And, I would imagine that air-kneading would be an entertaining activity.  I'll have to try that one.  Sounds like fun.


I actually slowed down the bread-baking a little in July to focus on jam making, but I did manage to make Whole Wheat Banana Bread with Chocolate Chips, Beer Bread with Roasted Barley for the Mellow Bakers, Gluten-Free Bread Sticks for the HBinFive Bakers, Tuscan Bread (Pane Toscano) for Bread Baking Day #32 and Noon Rogani for the Artisan Bread Bakers. Although my Noon Rogani looks more like a spiral than a turban.  If you're in the mood for a laugh, check out my French Bread Bloopers to learn what not to do when you bake bread.


That's about it folks!


Thanks for the fun adventure Sandy.  It's been great hosting the Summer roundups.  Now, it's time to hand the reigns back to you.

Thanks to all of the BYOB Bakers for participating!  I look forward to seeing all of your future breads!


Happy Baking!  And, remember BYOB!
Cathy
Posted by Unknown at 20:24