I really enjoy participating in bread-baking groups and events because it provides me with the opportunity to make many different types of breads and to meet and learn from other bread bakers. However, sometimes you just want to focus on a particular bread or technique until you master it.

With that in mind, I’m beginning a journey to learn more about baguettes and hopefully, how to enjoy them. Baguettes represent the epitome of French bread baking, but I’ve never really been a true baguette fan. Don’t get me wrong. I love the tradition of baguette-making and all that goes along with it -- working with the wet dough, shaping the baguettes, the crackly crust and all that. It’s the flavor that doesn’t wow me.

I decided the problem must be with me, not the baguettes. I must not have given them a fair shake. So I’ll be experimenting with different types of baguettes. In this post, I’m revisiting Poolish Baguettes. 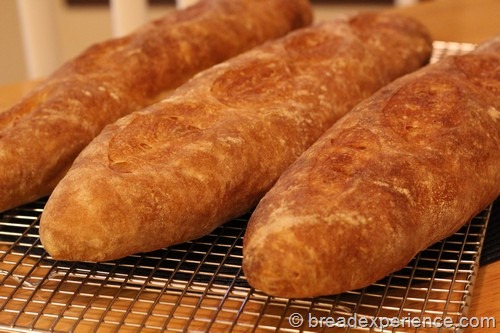 For these baguettes, I wanted to use a basic formula and adjust as necessary.  I consulted a few of my bread books and finally decided to use a compilation of the basic bread formula with an overnight poolish in Bread Science by Emily Buehler and the formula for the Team USA Baguettes from Crust and Crumb by Peter Reinhart.

I made these baguettes twice and adjusted the hydration in the poolish and the final dough each time.  I also used different amounts of yeast in the final dough to see how the dough would perform.

For my first attempt at these baguettes, I increased the hydration in the poolish and kept the water the same in the final dough because I was aiming for a wetter dough. The formula in Crust and Crumb uses less poolish and more flour than the formula in Bread Science. I ended up somewhere in between the two formulas.

I forgot that my oven is really hot when I decided to go with the suggested temperature of 475 degrees. It was too hot so the tips of the baguettes got a little burned before I turned the oven temp down. I also removed the parchment paper partway through baking on this attempt.

These baguettes were definitely crispy, but not exactly what I was aiming for.  They tasted rather blah. I forgot to write down how much salt I used so that may have been part of the problem. I didn’t forget the salt this time, but I did reduce it a bit. These baguettes worked well as Crostini, but I wanted them to taste good on their own. 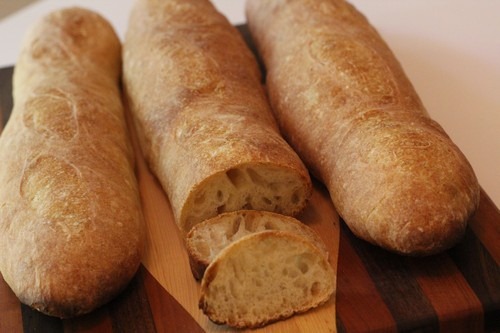 For the second batch, I used the same poolish (I had made a double batch), but reduced the amount of water and yeast in the final dough.  I decided the extra hydration in the poolish needed to be adjusted in the final dough. I also baked the baguettes at a lower temperature (450 degrees). I was much more pleased with these baguettes. They were crispy on the outside and even crackled when they came out of the oven. The flavor was much better as well.  I didn’t get the chance to try them until the next day but they tasted pretty good by themselves the next day.  I also enjoyed them with jam, butter and egg salad. 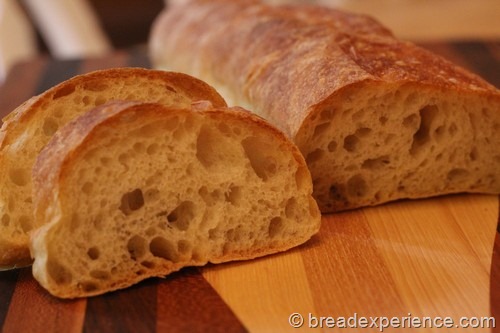 Here is the formula I used for the 2nd Attempt.

Combine all of the ingredients in a mixing bowl.  Beat with a spoon or whisk about a minute, until the batter is mixed thoroughly and is pretty smooth. Cover the bowl with plastic wrap.  Let it rest on the counter for 12 to 15 hours. 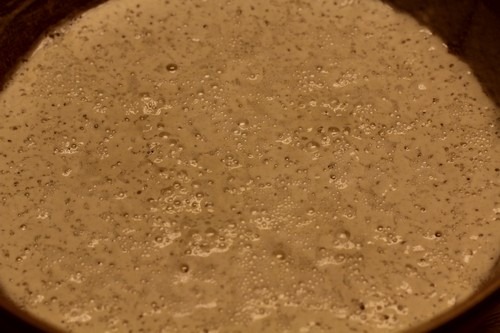 When the poolish is ready, combine the flour, water, and poolish in a large mixing bowl. 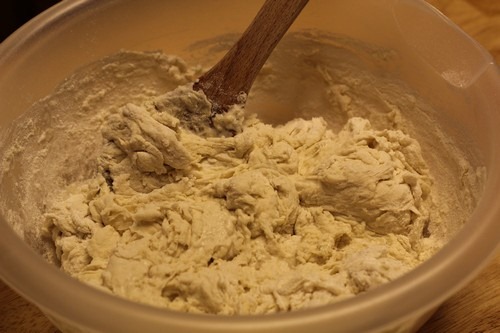 Add the yeast, then the salt and mix the ingredients together until the dough forms a ball. I used my hands to incorporate the yeast and then the salt thoroughly into the dough. 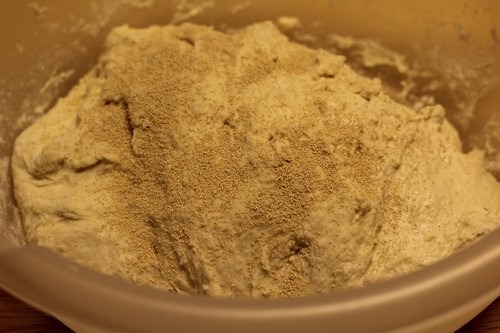 Knead the dough on a floured surface for about 12 minutes. I only kneaded the dough for about 3-5 minutes.  I used the turn and fold method during the bulk fermentation instead of the longer kneading time. 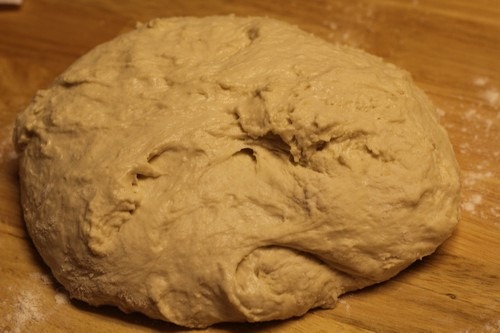 The dough should be shiny and smooth and little bit tacky, but not sticky.  Place the dough in a greased bowl and let the dough proof for 2 hours. After an hour, fold the dough, re-shape it into a ball and place it back in the bowl. 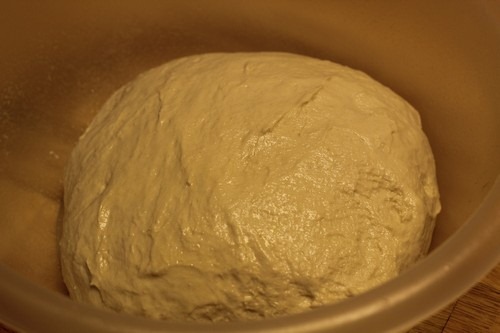 The dough should be about 1 1/2 times its original size after 2 hours. 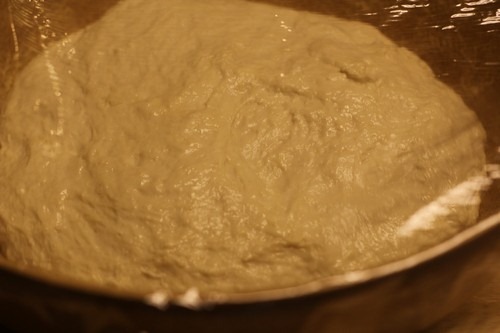 When the dough has risen, divide the dough into 3 equal pieces.  Shape them into rough logs and place them on a lightly-floured counter.  Mist them lightly with spray oil and cover them with plastic wrap.  Let them rest for 30 minutes. 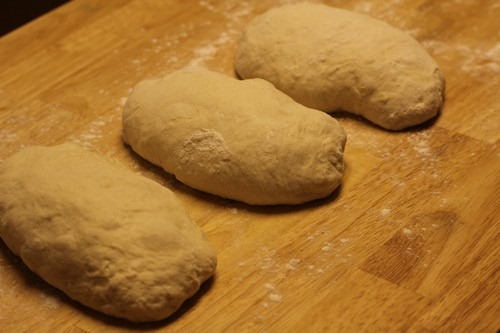 Shape the dough pieces into baguettes and place them on a floured couche.  Refer to the Rosemary and Flax Baguettes post for step-by-step instructions on shaping baguettes. 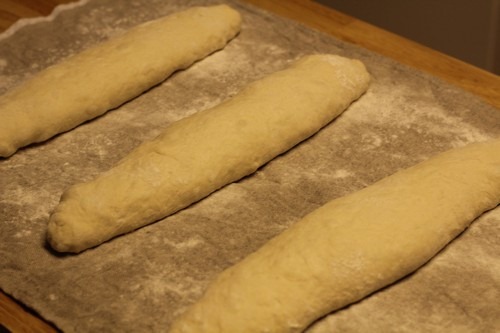 Bring up the folds of the couche to support the shape of the loaves while proofing. I put books at either end to hold up the sides of the couche. 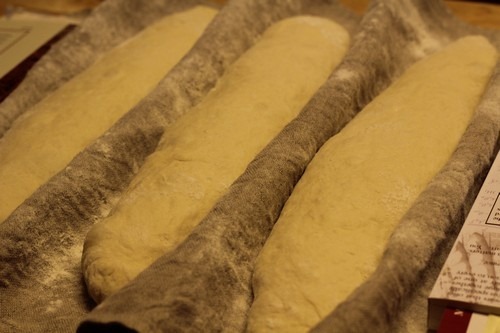 Spritz the loaves with spray oil and cover with plastic wrap.  Let the loaves proof for 2 hours at room temperature, or until nearly doubled in size.  If your house is warm, it might not take that long. 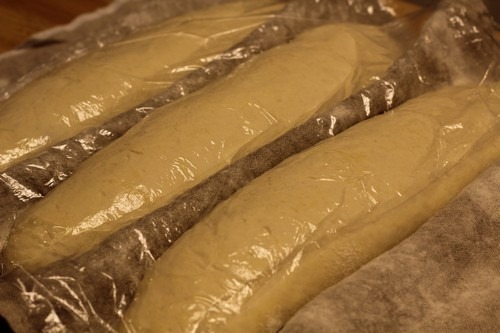 7. Prepare your oven for hearth baking

In the meantime, prepare your oven for hearth baking by placing a baking stone on the middle rack and an empty steam pan on the bottom rack.  Preheat the oven to 450 degrees F.

Carefully and gently transfer the loaves from the baker’s couche to a baking sheet lined with parchment paper.  I used a baker’s bench to assist with the process. 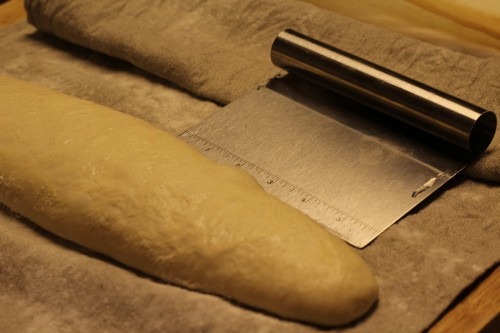 I reused the parchment paper from the previous batch of baguettes. 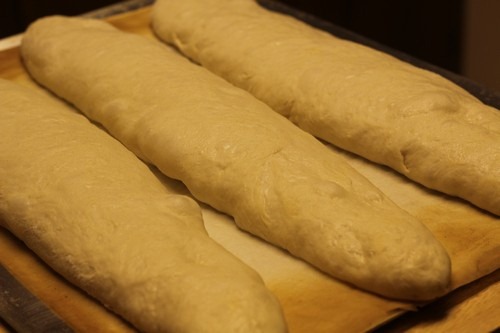 Score the baguettes by making 1/2” cuts in the dough using a lame or serrated knife.  I’m still getting the hang of this part. 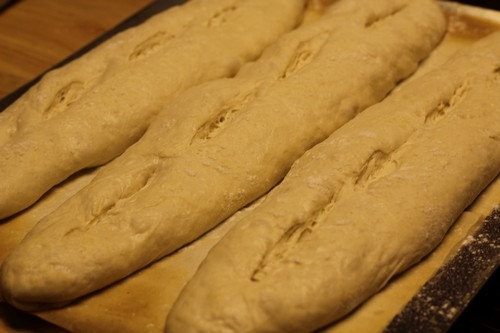 Pour 1 cups of hot water into the steam pan and immediately slide the loaves off of the baking sheet (parchment sheet an all) onto the baking stone.  Steam the loaves again by spritzing the loaves and the oven walls with a spray bottle. Close the oven door and repeat the spraying process again after 2 minutes.

Bake the loaves for 20 to 30 minutes, or until they are golden brown in color. The formula in Crust and Crumb says to turn off the oven at this point and bake them an additional 5 to 10 minutes; however, this didn’t work for me. As I mentioned previously, the tips burned on the first batch, so for the 2nd batch, I only baked the loaves about 25 minutes at 450 degrees. The crust turned out great.  It was crispy and crackly and wasn’t burnt at all.

10. Cooling and Slicing the Loaves

Transfer the loaves to wire racks and allow them to cool for at least 30 minutes before slicing and eating. 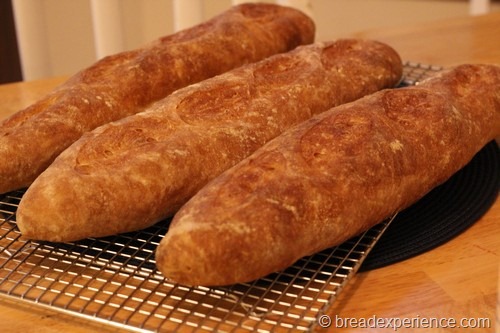 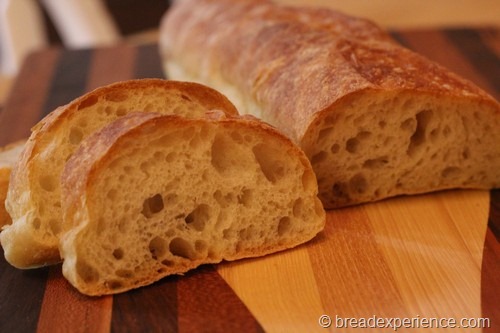 I enjoyed these baguettes. I hope to enjoy more baguettes as I continue learning more about them and trying different techniques.