I admit it, I really only wanted to make this bread because it’s baked in a Pullman pan. Vollkornbrot is a 100% rye bread which is a feat in and of itself because without the addition of wheat flour for body, rye usually makes a flat, crumbly, and coarse-grained loaf. I didn’t anticipate liking it. However, I really enjoy using my Pullman pan so I decided this was as good of an excuse as any to make the bread. I have a friend who usually enjoys rye breads so I figured I could give it to him if I didn’t like it. 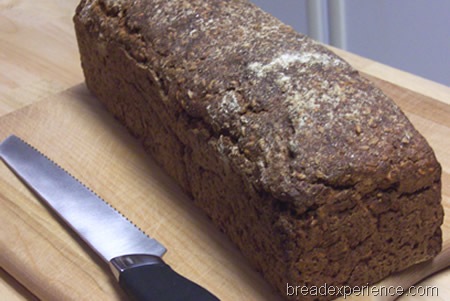 This bread is from Bread: A Baker’s Book of Techniques and Recipes by Jeffrey Hamelman. You can find the formula for Vollkornbrot with the sourdough and rye-chops soaker here.

The sourdough is made with some rye meal and 2 tablespoons of a mature culture. Then you let it ripen on the counter for 14 to 16 hours.  I think I let mine ripen for 17 hours.  I just couldn’t seem to follow the instructions on this one. I couldn’t find any rye chops so I tried chopping some rye berries, but ended up with a little bit of rye meal, some rye chops and some whole rye berries in the soaker. I decided just to go with it.  Hey, you only live once, right? I figured I wasn’t going to like it anyway so it didn’t matter. 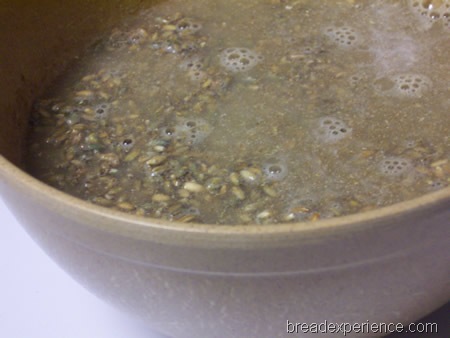 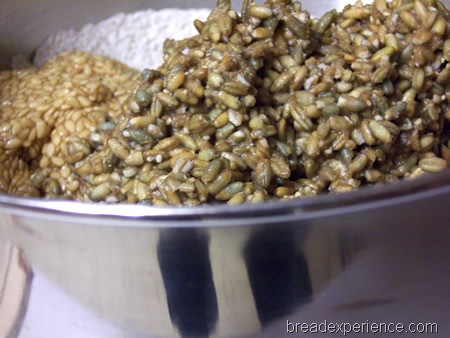 Next, you prepare the flaxseed soaker. You only let the flaxseeds soak for a little while in cold water so I wondered how that was going to turn out. 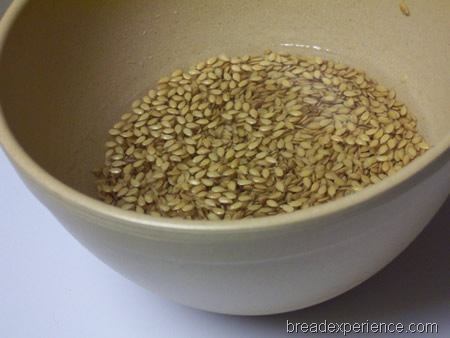 The flax seeds soaked up the water and became sticky, almost like gelatin.  It was really cool! 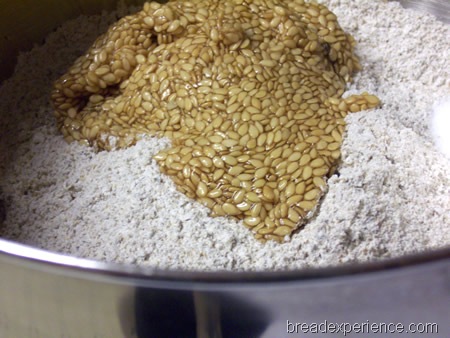 After you mix all of the ingredients, the final dough only has to proof for 10 to 20  minutes before you roll (or pat it) into a log and place it in the pan. 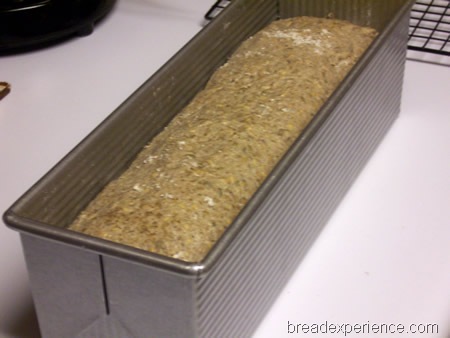 The final fermentation takes about 50 to 60 minutes.  Then you bake it for 1 1/4 hours. That’s a long time but the bread needs it due to the high-water retention properties of this type of bread. 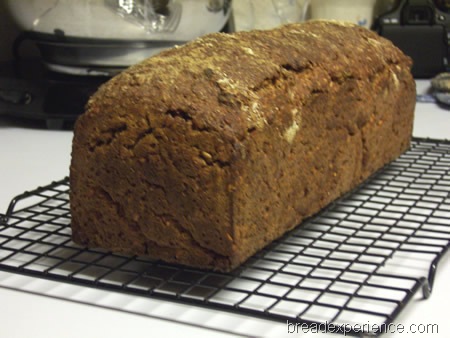 After the bread cools, you’re supposed to wrap it in baker’s linen and let it stand for a least 24 to 48 hours before slicing.  I was a good girl and I let it sit for 48 hours. 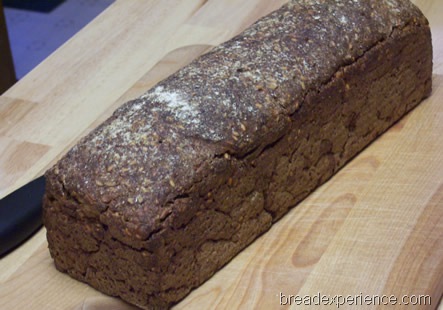 Then we sliced it, toasted it and ate it.  Guess what, my taste tester and I liked it!  This is a very hardy bread, but it has a great flavor.  It’s definitely not dry. I think you could make a meal out of it if you were so inclined.  It makes a good accompaniment to smoked fish, cured meats, aged cheeses, preserves, but we enjoyed it plain with butter. 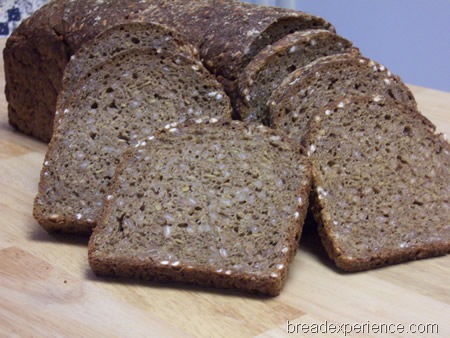 I’m so glad I decided to try this bread. It’s really good and I had fun making it. It’s a big loaf so I froze some of it and I plan to give some to my friend who likes rye breads.  I think he’ll enjoy it.