Whole Grain Mesquite Buns and Pizza at the Mountain: HBinFive

This month has been crazy busy for me so I didn't get to the HBinFive May 15th breads: Hearty Whole Wheat Sandwich Bread, Turkish Style Pita Bread and Whole Grain Garlic Knots.  I was going to make some of the breads for the June 1st Bread Braid, but I've already made the whole wheat sandwich loaf so I decided to try something different.

As you may remember, in April, I posted about Southwestern Focaccia/Pizza made with mesquite flour and other flours. Peter with Casa de Fruta saw the post and was very interested in finding out how the mesquite flour would perform in other types of bread. He asked if I would be willing to test the flour on regular bread and I agreed.

I started with the Healthy Bread in Five Minutes Master Formula and changed it up a bit.  I halved the recipe and used 2 cups of whole wheat flour, 1 1/2 cups of all-purpose flour and 1/4 cup of the mesquite flour.  The rest of the ingredients -- yeast, salt, vital wheat gluten, and water -- remained the same.

I made buns with half of the dough.  The dough smelled really good and the mesquite flour gave it a unique flavor so I thought it would taste good with grilled hamburgers.  It rained the night I made the buns so we decided not to grill out.  Instead, I had a fried egg and cheese on one of the buns.  I didn't take a photo but the combination was really good. 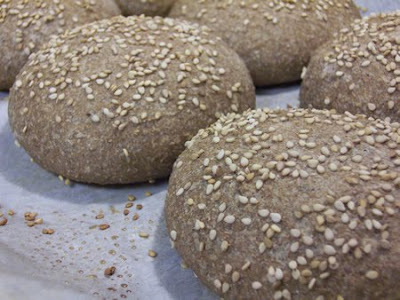 Pizza at the Mountain

For the rest of the dough, I was going to try some whole grain and mesquite knots but opted for pizza instead.  As I mentioned, my life has been really hectic this month. Finding time for myself much less baking has been a challenge.  In fact, I was so stressed, I didn't even feel like baking - which is very unusual for me.

So to relieve some of the stress, we went strawberry picking last Saturday and then decided to go camping for the night.  We live near a very unique Stone Mountain so we decided to camp there for the night.  The pictures aren't the greatest but hopefully, you'll get the gist.

Here is the view of the mountain from our campsite. 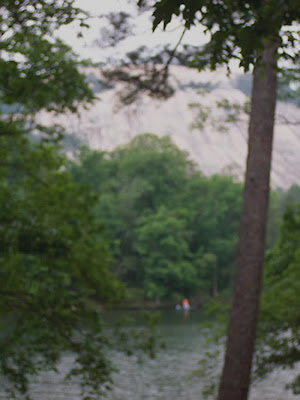 Since I still had half a batch of the whole wheat mesquite dough, I decided to take it with me camping.  I've been trying to make grilled pizza on a camping trip for some time now and it seemed like something always prevented me from doing it. I decided to give it another go.  That's the beauty of the Artisan Bread and Healthy Bread in Five minutes' method.  Once you have the dough in the refrigerator, you have some flexibility as to when you make the bread (or pizza in this case). To reduce the number of items I had to carry with me, I rolled the dough in olive oil and placed it in a plastic bag in the cooler to transport it to the mountain.


Here is another view of the lake from our campsite. Very nice and very beautiful. 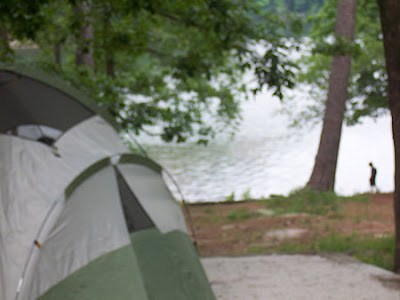 It was late when we got to the camp site on Saturday so I made the pizza for breakfast on Sunday. When it was time to grill it, I spread the dough out in a rectangle on a piece of aluminum foil to make sure it would fit on the grill. 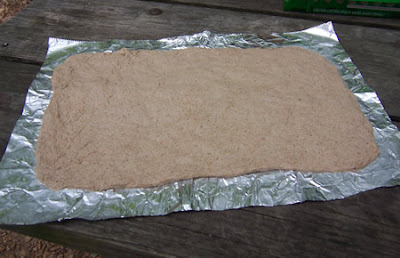 Once the coals were ready, I transferred the dough to the grill.  This was tricky because the picnic table where I was preparing everything was a little bit away from the grill.  I was just hoping I didn't drop it on the ground.  I didn't! 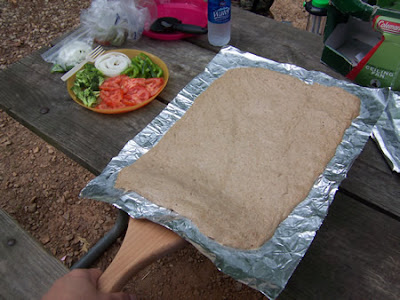 I let the pizza dough cook for a little while, then realized it wasn't working too well since the grill didn't have a lid. 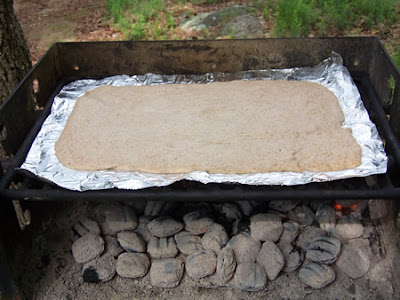 So to improvise, I used another sheet of aluminum foil to cover the top. 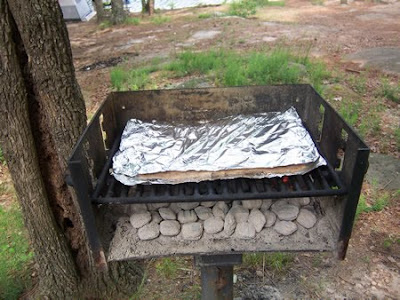 The bottom of the pizza was finally done so it was time to flip it over.  Well, this was another tricky process because the heat of the grill had made the dough stick to the aluminum foil.  In hind sight, I should've spread the aluminum foil with more olive oil. 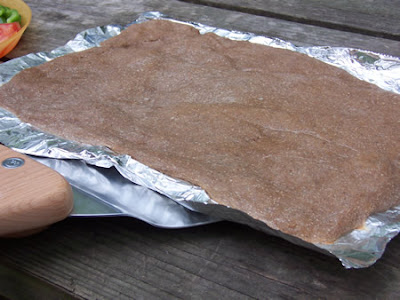 We carefully peeled the pizza off of the aluminum foil, flipped it over and placed it on another piece of aluminum foil (which had been spread with olive oil). 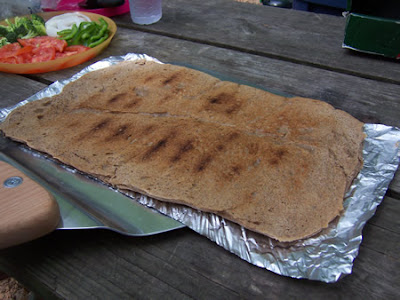 Then I placed the pizza on the grill to bake the other side before adding the toppings.

For the toppings, I used homemade marinara sauce, tomatoes, broccoli, green peppers, and onions.  The marinara sauce was frozen when I put it in the cooler but by the time I was ready to use it, it had thawed out. 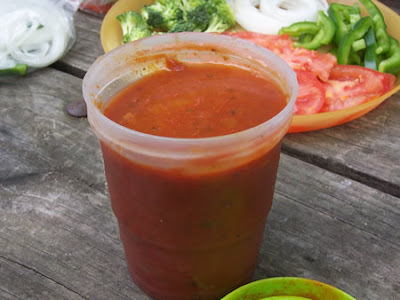 I had chopped the vegetables and placed them in plastic bags so it made the pizza-making process really easy at the camp site. 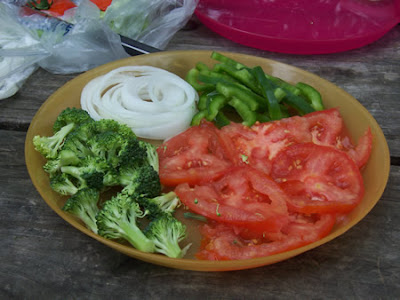 When the other side was ready, I placed the toppings on the pizza 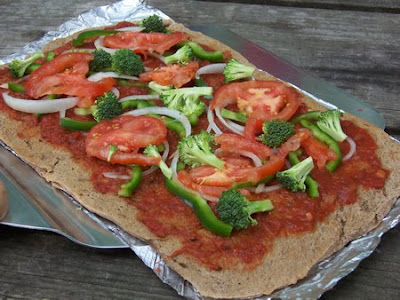 Then sprinkled it with mozzarella cheese. 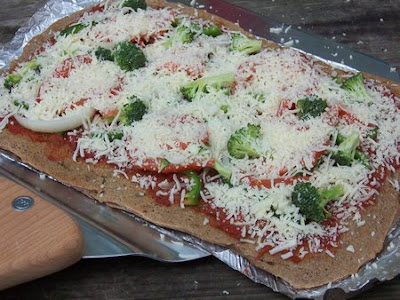 Then it was time to transport it to the grill again.  I really didn't want to drop it this time because the dog was waiting with bated breath in case I did.  Fortunately, it made it to the grill. 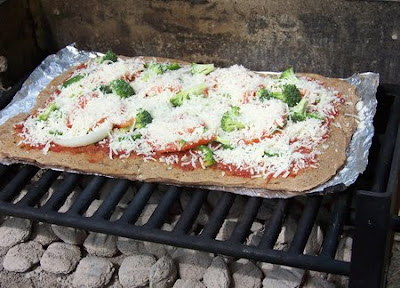 I baked the pizza for awhile but the cheese wasn't melting since the grill wasn't enclosed.  To help the process along, I used the back of my pizza peel to keep some of the heat from escaping so that the toppings would actually bake through. 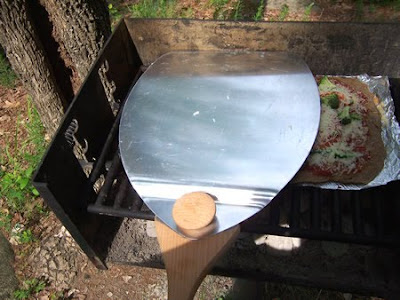 The pizza finally did finish baking and this is what it looked like. 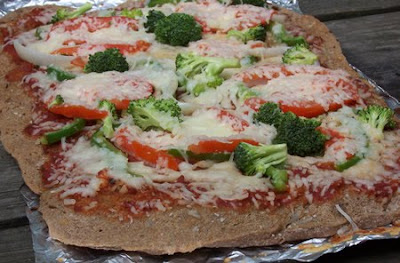 I would like to come up with a better (different) solution for the next time I grill pizza on an open grill, but in a pinch, this system worked out okay.  It just took awhile and my arm got tired of holding the pizza peel over the grill. It was also rather hot! However, the finished product was worth the effort.  It was delicious!


Thanks for joining me in the bread-baking blog.  Check out the blog BigBlackDog to see all of the breads in the June 1st Bread Braid roundup.


Here are some additional bread-making resources:
You might enjoy some of the other breads that have been featured in the bread making blog.
Posted by Unknown at 07:46