This month, the Artisan Bread Bakers made Flour Tortillas for the bread of the month. BOM (Bread of the Month) is a virtual bread-baking party hosted by Phyl Of Cabbages & King Cakes.  I've never made tortillas before so I was really looking forward to trying them.  I've also been wanting to try the Grilled Chicken Tacos featured on the cover of the May Issue of Food and Wine.

Yesterday marked the start of Memorial Day weekend here in the States and it's typically a big weekend to grill out.  So I decided it would be the perfect weekend to try these Grilled Chicken Tacos. Well wouldn't you know it - it rained last night!  Not to worry!  I grilled the chicken inside instead of outside on my gas grill. They still tasted good. 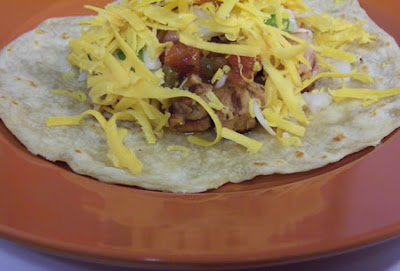 Here's how you make the tortillas...

Make the dough.
Combine the flour and fat in a large mixing bowl. Work in the fat with your fingers, until completely incorporated.  I used my pastry tool to cut in the butter, 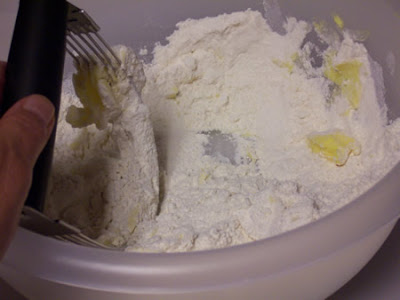 then finished working the dough with my fingers. 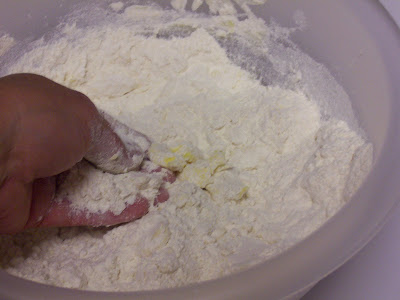 Dissolve the salt in the water, pour about 2/3 cup of it over the dry ingredients and immediately work it in with a fork; the dough will be in large clumps rather than a homogeneous mass. If all the dry ingredients haven't been dampened, add the rest of the liquid (plus a little more, if necessary). 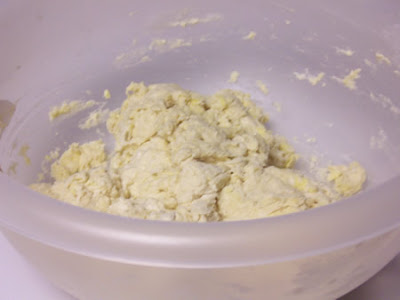 Scoop the dough onto your work surface and knead until smooth. It should be medium-stiff consistency -- definitely not firm, but not quite as soft as most bread dough either. 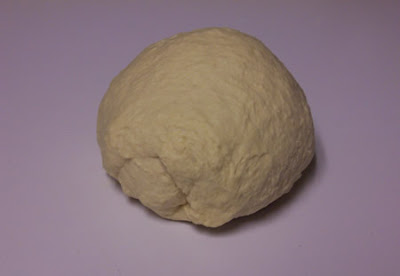 Rest the dough.
Divide the dough into 12 portions and roll each into a ball. 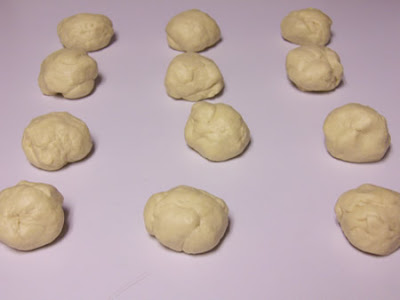 Set them on a plate, cover with plastic wrap and let rest at least 30 minutes (to make the dough less springy, easier to roll). 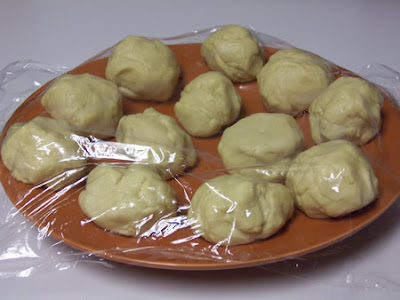 Roll and griddle-bake the tortillas.
Heat an ungreased griddle or heavy skillet over medium to medium-high heat.

On a lightly floured surface, roll out a portion of the dough into an even 7-inch circle: Flatten a ball of dough, flour it, then roll forward and back across it; rotate a sixth of a turn and roll forward and back again; continue rotating and rolling until you reach a 7-inch circle, lightly flouring the tortilla and work surface from time to time. 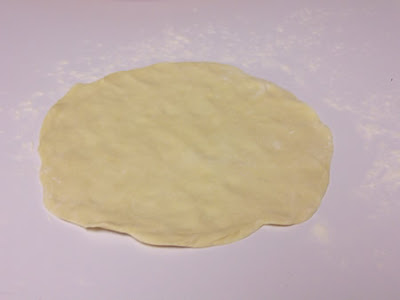 Lay the tortilla on the hot griddle (you should hear a faint sizzle and see an almost immediate bubbling across the surface).
After 30 to 45 seconds, when there are browned splotches underneath, flip it over. Bake 30 to 45 seconds more, until the other side is browned; don't overbake the tortilla or it will become crisp.
Remove and wrap in a cloth napkin placed in a tortilla warmer. Roll and griddle-bake the remaining tortillas in the same manner and stacking them one on top of the other.

Making the Marinade for the Chicken

I started the process about 6 hours before I planned to serve the tacos.

In a blender, puree the tomatoes with the lime juice, water and salt.  I didn't have any fresh tomatoes so I used some homemade salsa I made last Fall using fresh tomatoes.

Transfer the puree to a large resealable plastic bag and add the chicken thighs.  Seal the bag, pressing out the air.  Refrigerate the chicken for 6 hours to overnight. I forgot to take pictures of this part, but it's pretty easy.

Light a grill or preheat a grill pan.  Remove the chicken thighs from the marinade and pat them dry.  Brush with the oil and sprinkle with the paprika and parsley.  Grill over medium high heat turning occasionally until the chicken is lightly charred and cooked through, about 15 minutes.

Transfer the chicken to a work surface and let stand for 5 minutes.  Cut the chicken thighs into strips.  I cut it into chunks instead of strips.

Serve with the warmed tortillas, cheese, salsa verde, avocados, onions, tomatoes and cilantro. I didn't have any fresh tomatoes and we used the avocados for salsa for our chips so I just served the tacos with homemade salsa along with some onions and green peppers. 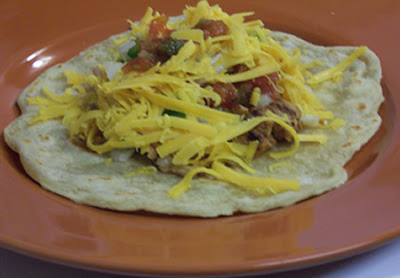 The tacos were delicious!  These flour tortillas are so easy, I'm going to try them again. I also plan on making some corn tortillas soon!