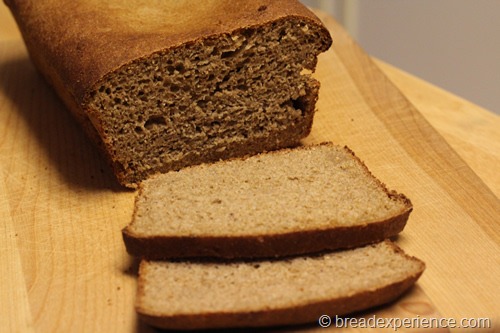 This is my first attempt at making Ezekiel Bread. I’ve been wanting to make this bread for several months. I met a couple of bread vendors at the local farmer’s market this past summer and one of the vendors was selling Ezekiel bread.  I got the mixture of grains to make it from Jerry at freshlymilledbreads.com and it has been on my list of bread breads to make ever since.

As it turns out, the HBinFive Bakers have been making historical breads this month.  Ezekiel Bread is a pretty historical bread so this was my first choice for my submission.  However, I didn’t have the recipe so I made Gingerbread instead.  The Gingerbread was delicious so I’m glad I made it, but I still wanted to make this bread. I finally got the recipe and made it the other night.

Ezekiel Bread comes Ezekiel 4:9 in the Bible.  It is called a “fasting bread” because Ezekiel was commanded by God to eat a specific amount of this bread everyday. Supposedly, this is all he ate for 430 days.

“Take wheat and barley, beans and lentils, millet and spelt; put them in a storage jar and use them to make bread for yourself." Ezekiel 4:9 (NIV)

The scripture is not specific on how the bread is to be made; however, some versions use sprouted grains. For my first attempt, I made the batter bread version using milled grains.

In my research for this bread, I found a site that has a couple of different recipes and methods for making Ezekiel Bread. His methods look interesting so I’ll probably try one of his versions for comparison.  He boils the grains rather than milling them into flour.

Since Ezekiel was instructed to lie on his side for a specific amount of time, it makes me wonder how he actually did make his bread. Not sure how he would’ve milled the grains. That’s probably why some versions sprout them.  It does say to put the grains in a storage jar, but that could just be for storage not sprouting.  I’ll have to do some more research.  In the meantime, I think I’ll try different methods until I find one that I like the best.

Source: I received a scanned copy of this recipe from the nice folks at freshlymilledbreads.com.

According to the recipe, this is a wonderfully nutritious bread and the combination of grains and beans makes a complete protein.  This mixture makes about 9 cups of flour. It’s a batter bread so I expected it to be a little dense with all of the grains and no white flour.

Stir the above ingredients very well. 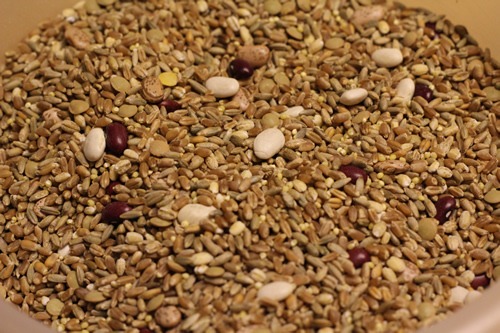 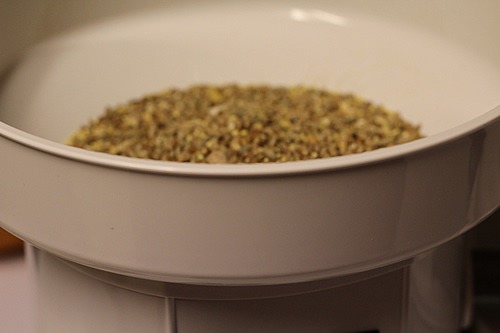 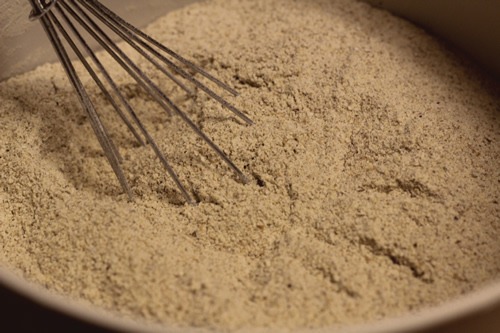 In a large bowl, combine water, honey, oil, and salt. Add all of the flour and yeast.  Stir or knead until well kneaded about 10 minutes.  This is a batter-type bread and will not form a smooth ball.  I mixed the dough using a Danish dough whisk, then I kneaded it with a stand mixer to make sure it was thoroughly incorporated. 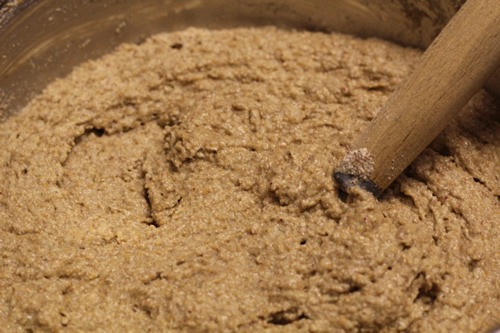 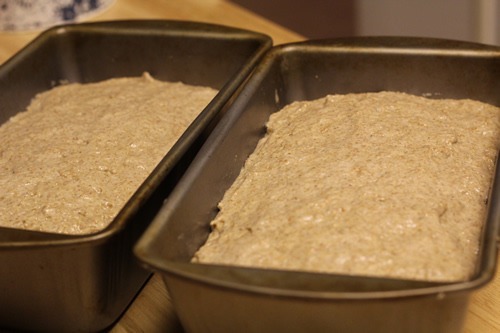 Let rise in a warm place for one hour or until the dough is about 1/4 inch from the top of the pan.  Do not over rise!  If it rises too much it will over flow the pan while baking.  These loaves may be proofed just a bit too much. 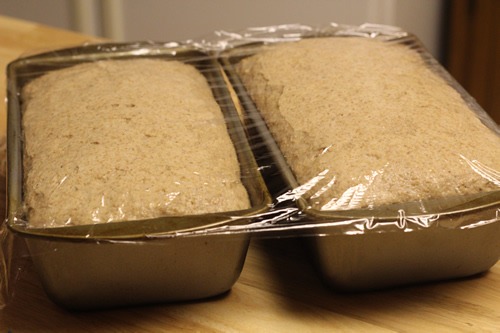 I barely let the loaves proof for an hour so I didn’t think I let the dough over rise, but the loaves sunk during baking.  I think the dough was too heavy for the pans. Or, it could’ve been because I opened the oven door during baking. I know, shame on me. The loaves were getting really brown before they were finished baking so I covered them with foil to prevent them from burning. 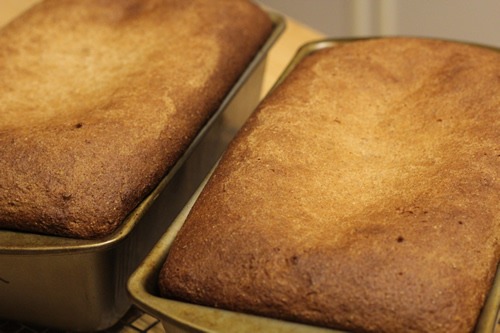 Even though I didn’t get the beautiful dome effect on top of the loaves, they taste pretty good. They are a little bit dense but not too much considering the amount of grains that are included.  This bread is very tasty and fulfilling. 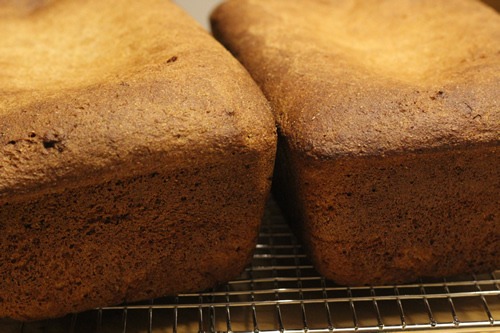 Although the loaves sunk, I didn’t get the tunnel in the dough effect from not being completed baked through.

This is a photo of some HBinFive Soft Wheat Sandwich Bread.  It didn’t get baked all the way through so it was gummy and had a tunnel running through the middle. After this experience, I got a good digital thermometer so I can tell when it’s done. 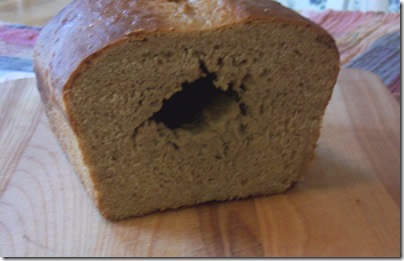 I sliced several slices of the Ezekiel Bread until I reached the middle to make sure that I didn’t have a tunnel.  No tunnel here. 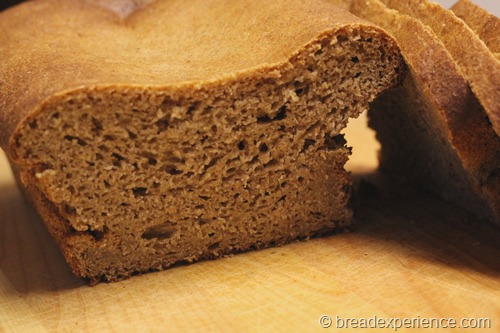 I’ve been enjoying slices of this bread spread with a little bit of peanut butter.  It doesn’t need much. I can only eat one slice at a time.  This is a very filling bread. It tastes and smells very earthy – in a good way.