Beer Bread with Roasted Barley is one of the breads the Mellow Bakers made in June. I've been really mellow about baking bread recently because it's so hot.  I didn't get around to this one in June so I added it to my list for July. 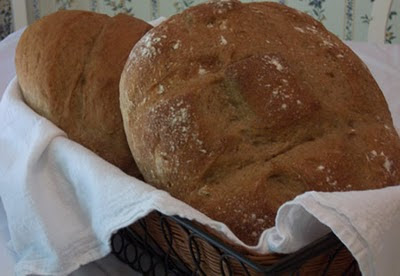 I made this beer bread with IPA beer my boyfriend made a few weeks ago.  That was another reason I didn't get to this one in June. I was waiting for the beer to be ready. I don't particularly care for IPA beer because it has a lot of bitter hops in it, which of course, makes it bitter. For that reason, I wasn't sure how it would taste in this bread, but I decided to give it a try.

I also used organic Montana purple barley grains that I found at the farmer's market. I loved the purple color of these grains so I thought it would be neat to use them in this bread. 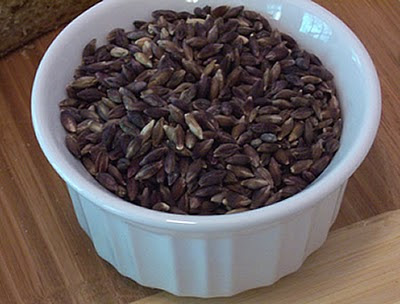 The process of malting barley begins by soaking the grains in water until the grains sprout.  Soaking the barley grains makes them sweet tasting.

To sprout the grains, I put about 1/4 cup of grains in a pint-size mason jar, covered it with cheesecloth and secured it with a rubber band.  Then I poured water over the grains, drained them and put the jar in a dark cabinet for a couple of days. 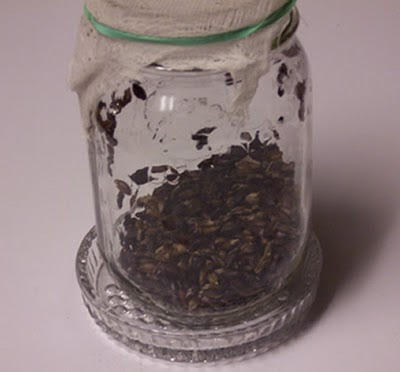 I rinsed and drained the grains a couple of times a day for about 2 days.  It's very hot here so it didn't take long at all for the grains to sprout.  As you can see by the photo below, these grains have really sprouted. If I was going to use these sprouts for regular flour, it would make the bread gummy, but for malted barley you want the grains to turn to starch so I thought this would work just fine. 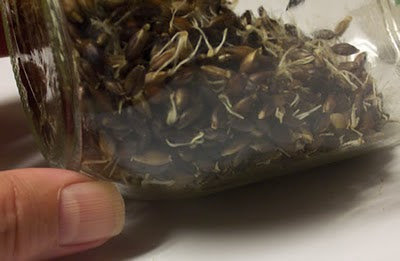 The next step is to dry the grains.  If you don't dry them before you try to grind them, it will clog your grinder.
To dry them, I placed the barley grains on a sheet pan and roasted them at 350 degrees for about 4 to 5 minutes. 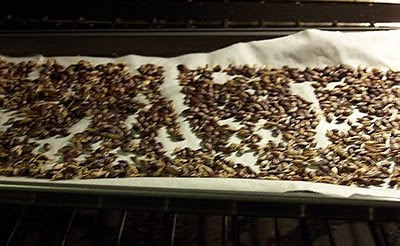 According to Jeffrey Hamelman, this step does two things: It brings out the full nutty flavor of the barley, and it deactivates any enzymes that might otherwise interfere with dough fermentation.  However, if you roast the grains too long, this will impart a bitter flavor.  I definitely wanted to avoid that since I needed the barley to offset the bitter beer flavor. 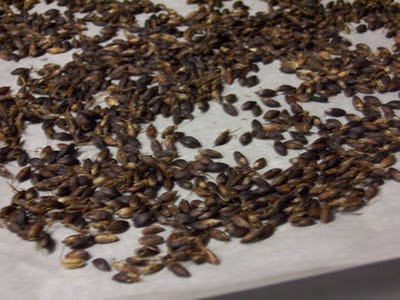 After the barley had cooled, it was time to grind the grains into flour.  I ground the grains using the bread flour setting on my WonderMill.  This setting grinds it pretty fine.  It almost looks like cocoa, but not quite as dark. 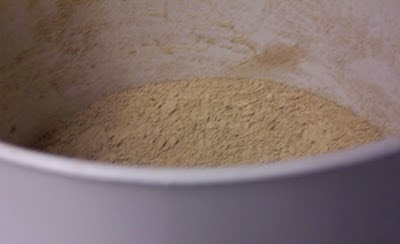 You can either time the grains so that you grind them the day you want to bake the bread or grind them and put them in a container to keep until you’re ready to use them.  I keep my malted barley in the freezer until I was ready to bake these loaves.

The formula for this bread can be found on pages 141 - 142 of the book Bread: A Baker’s Book of Techniques and Recipes by Jeffrey Hamelman.


Here is the crumb of the baked loaf. 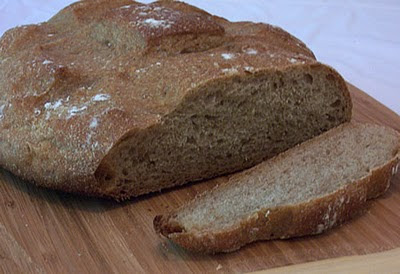 This Beer Bread has been YeastSpotted. Please visit Wild Yeast to view all of the lovely breads in the roundup.

The Mellow Bakers group was hosted by Paul at Yumarama. We baked breads from Bread: A Baker’s Book of Techniques and Recipes by Jeffrey Hamelman.