Vermont Sourdough is one of the breads the Mellow Bakers' group is baking in June. This particular bread is made daily at King Arthur Flour and I can see why.

King Arthur Flour is in Vermont and since sourdough cultures pick up microorganisms from the surrounding area, Mr. Hamelman decided to call this bread Vermont Sourdough. Sounds reasonable to me.  So, since my culture has been cultivated in Georgia, it is the Georgia version of Vermont Sourdough, but let's just call it Cathy's Sourdough for short. 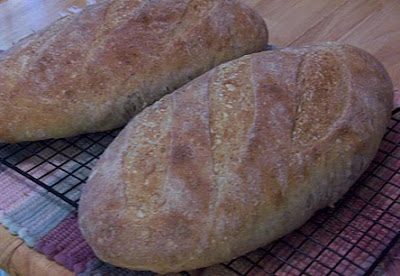 I like this sourdough bread.  It is a pure sourdough in that it has no added dry yeast - just wild yeast. The formula allows you to adjust the fermentation time based on how tangy you want the finished bread. I don't really like my sourdough too tangy so I opted to ferment it the least amount of time. However, in hindsight, I should've retarded it for the suggested 18 hours to give the crumb a better structure.


The formula for the Vermont Sourdough can be found on pages 153 - 154 of the book Bread: A Baker’s Book of Techniques and Recipes by Jeffrey Hamelman.

You can also find a version posted here.

I started the process a couple of days before I planned to make this bread.  I fed my starter and made sure it was ready to go.  I used the starter we made in the BBA Challenge because it includes some rye flour. My other starter was made from white bread flour.

I made the final build about 16 hours before I mixed the dough.  I started it Saturday night about 9pm and let it sit on the counter until 1pm Sunday afternoon.  Here is what the liquid levain looked like after 16 hours. 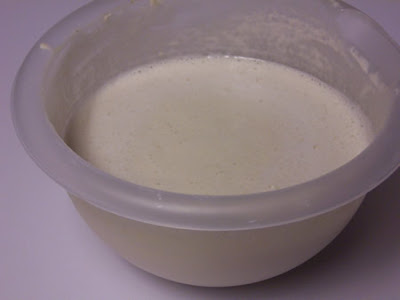 I mixed all of the ingredients (except the salt) in a large bowl using my dough whisk and my hands until the dough was a shaggy mess. 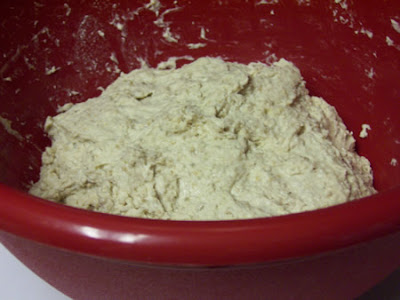 Then I covered it with plastic and let it rest (autolyse) for hour.  The book says this phase can be from 20 to 60 minutes.  I was doing other things so I opted for the longer time. 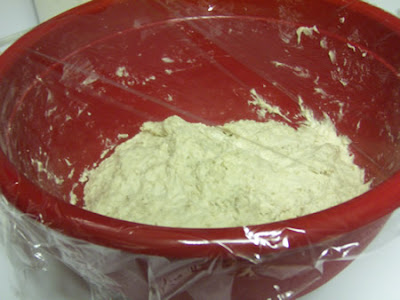 Then I sprinkled the salt over the top and mixed the dough with my hands until it was thoroughly incorporated. 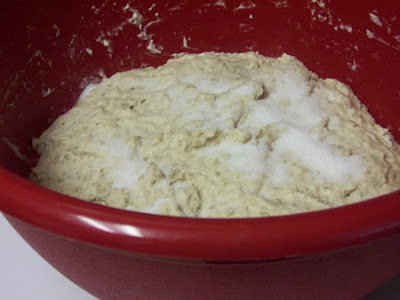 Since I was doing this by hand rather than using a mixer, I kneaded the dough on the counter for about 5 minutes until it was supple. 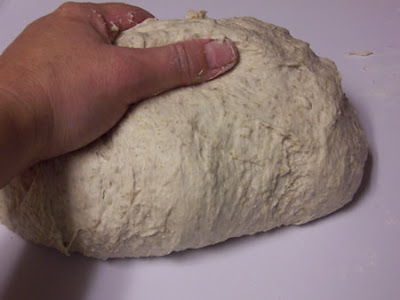 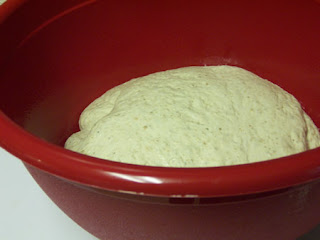 During this time, you fold the dough either once (after 1 1/2 hours) or twice (at 50-minute intervals).  I don't have a photo of the folding process for this post but you can view the step-by-step process as well as a video in my post on Ciabatta.

After the dough had finished the bulk fermentation, I divided it into two 1.5-pound pieces. 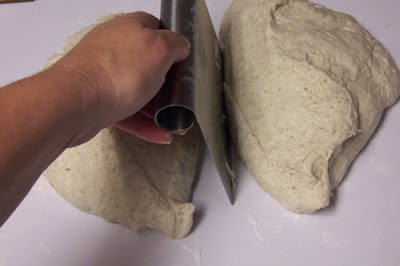 I shaped my loaves into topedo shapes.  The book suggests either a round or oblong shape, but I love the torpedo shape so I did that one.  For details on how to shape a torpedo loaf, take a look at the New York Deli Rye post. 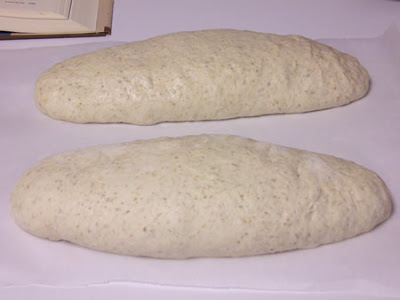 Then it was time for the final fermentation which takes approximately 2 to 2 1/2 hours.  It didn't take my loaves that long.  They were huge in about an hour and a half because it was really hot and humid.  To enhance the flavor, you can retard the loaves at this point for up to 18 hours at about 42 degrees, but I opted to go ahead and make the loaves.

I made three slashes in the loaves and let the loaves rest while I preheated the oven to 450 degrees with a baking stone in place and a steam pan underneath.  For more detailed instructions on hearth baking (baking with a steam pan), refer to the post on Pain À l'Ancienne Baguettes. When the oven was preheated, I placed the loaves on the baking stone and poured one cup of hot tap water in the steam pan.  I closed the door, then opened it back up and spritzed the loaves with water three times at 30-second intervals, then baked the loaves for about 40 minutes. 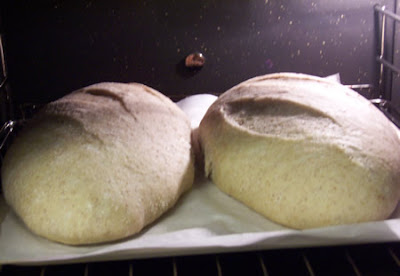 I rotated the loaves 180 degrees about halfway through the baking cycle for even baking.  Then I continued baking them until they were golden brown and sounded hollow when thumped on the bottom. 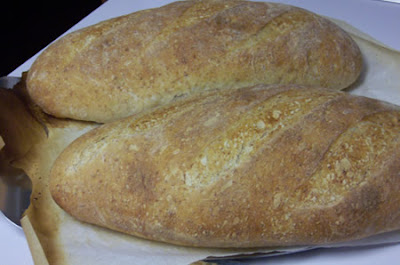 Then I let the loaves cool on a wire rack before slicing. 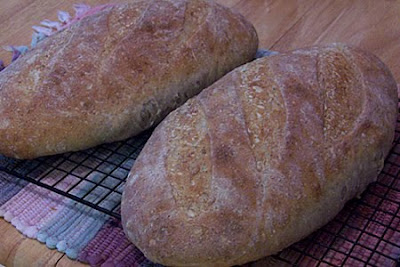 When I couldn't wait any longer, I sliced one of the loaves and tasted a slice.  It was yummy!  Not too tangy.  The crumb is a little tight on this one - not full of holes like it should be, but it tasted good. 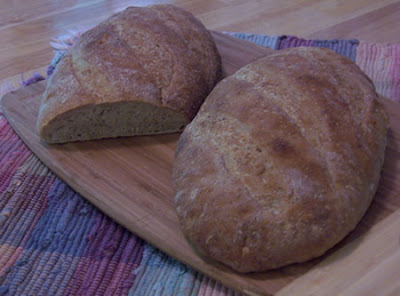 
Thanks for joining us in the Bread Experience bread-baking blog.  We hope you’ll join us again soon.