After I finished with the BBA Challenge, I joined the Mellow Bakers. We baked breads from Bread: A Baker’s Book of Techniques and Recipes by Jeffrey Hamelman.

The first bread we made was English Hot Cross Buns.  I had never made hot cross buns before so I was looking forward to this one. They sounded delicious!  And, let me tell you, they are delicious! 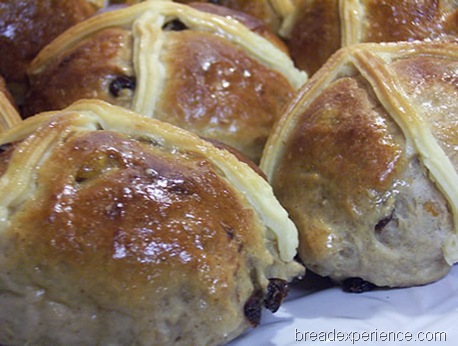 “Hot cross bun, a round bun made from a rich yeast dough containing flour, milk, sugar, butter, eggs, currants, and spices, such as cinnamon, nutmeg, allspice, and cloves. In England, hot cross buns are traditionally eaten on Good Friday; they are marked on top with a cross, wither cut in the dough or composed of strips of pastry. The mark is of ancient origin, connected with religious offerings of bread, which replaced earlier, less civilized offerings of blood. The Egyptians offered small round cakes, marked with a representation of the horns of an ox, to the goddess of the moon. The Greeks and Romans had similar practices and the Saxons ate buns marked with a cross in honor of the goddess of light, Eostre, whose name was transferred to Easter. According to superstition, hot cross buns and loaves baked on Good Friday never went mouldy, and were sometimes kept as charms from one year to the next. Like Chelsea buns, hot cross buns were sold in great quantities by the Chelsea Bun House; in the 18th century large numbers of people flocked to Chelsea during the Easter period expressly to visit this establishment."
---Oxford Companion to Food, Alan Davidson [Oxford University Press:Oxford] 1999 (p. 114)

Adapted from: Bread: A Baker’s Book of Techniques and Recipes by Jeffrey Hamelman.

You can find a variation of this Hot Cross Bun recipe on Wild Yeast. 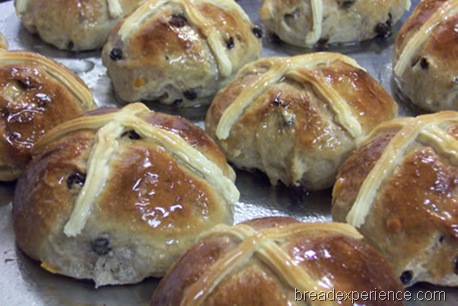 I made the version in the book; however, I made a few adjustments myself.

When I got ready to bake this bread, I didn’t have any bread flour so I used a combination of unbleached all-purpose flour and freshly-milled white whole wheat flour. It worked out really well! 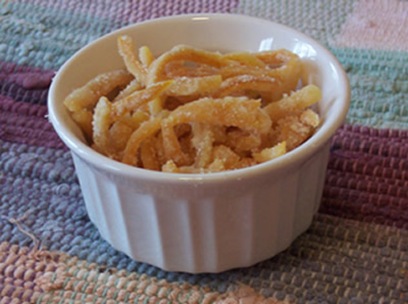 This bread takes about 4 hours to make. I started the process Saturday morning.  I didn’t actually bake them until Saturday evening so it took me a little longer than 4 hours.

You begin by making a sponge with the flour, milk, sugar, and yeast. The sponge will be very thin. Cover with plastic wrap and let stand for 30 to 40 minutes.

The sponge will have risen to about 3 to 4 times its original height.  It should be quite light, but there should be structure to it.

Place the flour in a mixing bowl and add the soft butter, and mix just until the butter is dispersed. Add the eggs, sugar, salt, and allspice and mix them all together. Then, add the sponge and mix until everything is thoroughly combined.

At this point, I realized I was going to have to add more flour.  This is what it looked like after several minutes of mixing. The book said that strong gluten is not the goal of this mix, but enough dough development is necessary so that there is sufficient strength to lift the fruits and butter.  It was still a wet mess, so I added more flour.

When a moderate gluten development has been achieved, add the currants and diced peel.  Mix until these are evenly distributed throughout the dough.

This wasn’t happening with the mixer, so I transferred the dough to a counter sprinkled with flour and kneaded it until it all of the currants and candied peel were integrated and the dough was the right consistency.  I had to add more flour during this part as well, but I finally got a supple dough that was tacky and not sticky.

Cover the bowl with plastic wrap and let the dough ferment for 1 hour, with a light fold after 30 minutes.

I fermented the dough for about 2 1/2 hours because I had to run some errands.  I did do the light fold after 30 minutes, but then it fermented for another couple of hours. 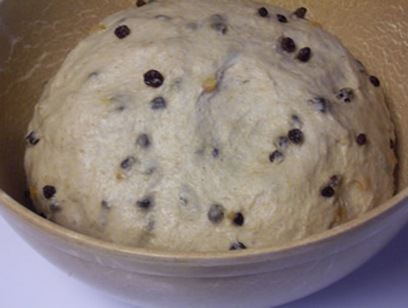 Cut the dough into 2.7 ounces pieces.  Round the pieces well, and place them on a sheet pan in an even configuration.

Cover the buns with plastic wrap to prevent crusting on the surface. Proof the Buns about 1 hour at 76 degrees.

I proofed them a little over 2 hours at room temperature.  It just worked out that way due to my schedule.  They didn’t seem to be any worse for the wear.

While the buns proof, make the crossing paste.  In a saucepan, melt the butter with the sugar and heat until the sugar is dissolved. Add the milk, vanilla, grated lemon peel, and beaten egg. Whisk all of these together, then add the sifted flour.  I used cake flour.

Using a round tip with a 1/4 to 3/8-inch diameter, fill a piping bag with the paste. I couldn’t find my round tip so my piping is a little more decorative.

When the buns are finally proofed, pipe lines in one direction on each bun, transecting the top of each bun.

When all the lines have been piped in one direction, rotate the pan 90 degrees and pipe lines again, so that the lines form an even cross.

Prepare the simple syrup by combining the sugar and water in a pan. Bring to a full boil, stirring once or twice so the sugar won’t burn on the bottom of the pan.  The syrup can be brushed while still hot onto the buns, or it can be made days ahead and kept refrigerated.  I made mine while the buns were proofing.

The directions say to bake the buns at 440 degrees for 14 to 16 minutes.  I started out following the directions, then realized this was way to hot and way too much time to bake them!  I baked them for about 5 minutes or so, then checked them and realized I needed to turn the heat down or they would burn.

I turned it down to 400 degrees then to 350 and baked them just a little bit longer.  They had some browning, but were still soft.

Once you remove them from the oven, brush them with the simple syrup. 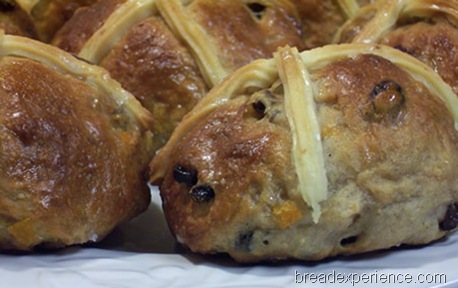 The buns are best when eaten fresh, but day-old buns can be reheated and served.

My taste tester read the part about the buns tasting best when eaten fresh, and he kept asking when we could eat them. I only let him have one because I needed to save the rest for the photo. I know I’m cruel that way!

These Hot Cross Buns were really good, but the crossing paste made way too much and it kept breaking off.  I didn’t mind, I just kept eating it. I have enough crossing paste left over for another batch.  Hmmm…that gives me an idea!  I’ll make more…

This bread has been submitted to BBD#28 hosted by Tangerine’s Kitchen. Be sure to visit her site to view all of the buns in the roundup.

The Mellow Bakers was started by Paul at Yumarama. We’ll be baking breads primarily from the book Bread: A Baker’s Book of Techniques and Recipes by Jeffrey Hamelman, but we probably won’t bake through the whole book. If you’re interested in baking at an easy pace, please join us!