I saved the best for last. For the final bread of the March 1st bread braid, we were supposed to make Southwestern Focaccia with Roasted Corn and Goat Cheese; however, I opted to make pizza instead.  Read on to find out why. 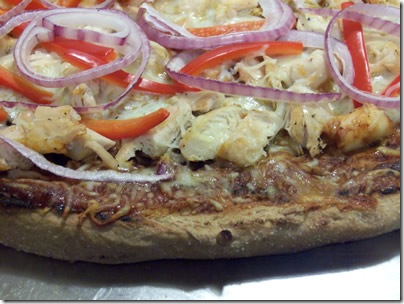 The Healthy Bread In Five Minutes’ book provides several dough options for making the Southwestern Focaccia.  One option is to use Mesquite Dough made with a mixture of Mesquite flour, all-purpose flour, whole wheat flour and corn masa. Well, when I found out about mesquite flour, that just put this Focaccia over the top for me.  I just couldn’t see making this bread with any other dough besides the Mesquite dough.  I haven’t found Mesquite Flour (yet) so I decided to wait and make the Focaccia when I do find it.  The recipe also calls for roasted corn so I thought it would be awesome to wait until I can get some fresh corn and roast it on the grill.  If I can wait that long, that is…

Some of the other bakers in the group decided to make pizza with the whole wheat dough. I thought that was a great idea! I decided to grill the pizza rather than baking it on a baking stone like I usually do because it was beautiful day in Atlanta yesterday and I just wanted to be outside.  Of course, by the time I got around to grilling it, it was a little bit nippy but still sunny.

I’ve also been wanting to try some of the recipes in my Pizza on the Grill Cookbook and I thought this dough would be perfect.  I even got to use my handy foldable pizza peel.  This is the main reason I got this particular pizza peel in the first place.  It has a longer handle and it’s metal (the peel not the handle) so I thought it would be good for all the grilled pizza I plan to make.  This is only the second time I’ve grilled pizza, but based on the results, I’ll be doing this more.

Recipe adapted from Pizza on the Grill by Elizabeth Karmel and Bob Blumer.
Printer Friendly Version

If you’re not using leftover chicken, then you’ll want to grill the chicken before you make the pizza.

Brush the chicken breast (or tenders) with 1 tablespoon of the oil and season with salt and pepper.  Place the chicken on the cooking grate directly over the heat and grill until no longer pink in the middle, 10 to 12 minutes, turning once halfway through.  Set aside until just ready to use, then cut into 1/4-inch thick strips.

For this pizza, I made up another 1/2 batch of the 100% whole wheat and olive oil dough using Bob’s Red Mill Whole Wheat Flour this time instead of freshly milled whole wheat flour. I let it ferment for a few hours, then refrigerated it overnight.

When I was ready to make the pizza the next day, I shaped the dough into two balls and let them rest on the counter while I was grilling the chicken. 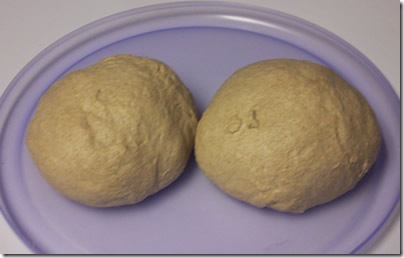 Then, I shaped the pizza by stretching it out with my hands, pressing it out from the center against the work surface. You’re supposed to make a 12-inch, organically shaped piece of dough – round, square, or rectangular – 1/8 to 1/4 inch thick; however, I made it in the shape to fit my pizza peel to make it easier to handle – or so I hoped. Then I brushed both sides of the dough generously with oil. I was really getting into the whole process so I forgot to take a picture of this part.

The instructions say to pick up the dough by the two corners closet to you and in one motion, lay it down flat on the cooking grate from back to front (as you would set a tablecloth down on a table). This was a little bit tricky.  I used the pizza peel to transfer the dough to the grill and then placed it as carefully as I could. Since I needed three hands for this already, I didn’t get a photo.

Close the lid and grill for 3 minutes (no peeking!), then check the crust and, if necessary, continue grilling a few more minutes until the bottom is well marked and nicely browned.> 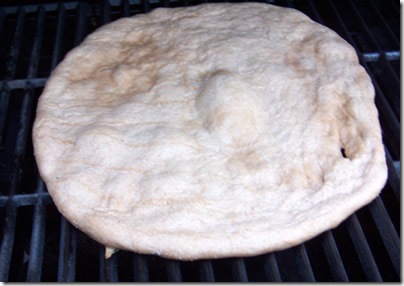 Use tongs to transfer the crust from the grill to a peel or rimless baking sheet.  Close the lid of the grill.  Flip the crust to reveal the grilled side. 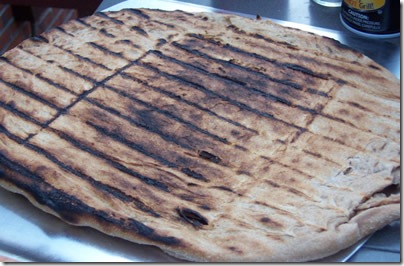 Then, brush the entire surface with the BBQ sauce.  For the first pizza, I used some BBQ sauce I got in San Antonio the last time I was there on business. I didn’t have quite enough for two pizzas so I used some hickory smoked BBQ sauce as well.  My sons and I decided it tastes better with the Hickory or other smoked flavor.  I used that on the second pizza and the flavors worked together much better.
Top with the chicken and sprinkle with the cheeses. Arrange the onion rings and all of the bell pepper over the cheese. 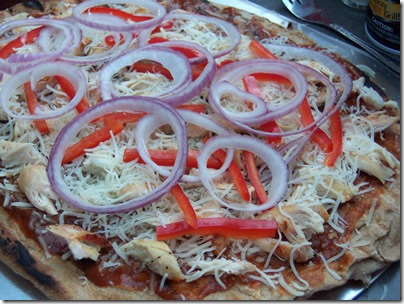 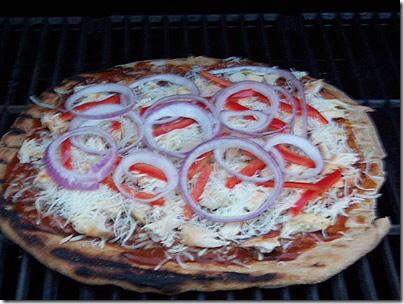 Remove from the grill, sprinkle with the BBQ rub, and season with salt and pepper. 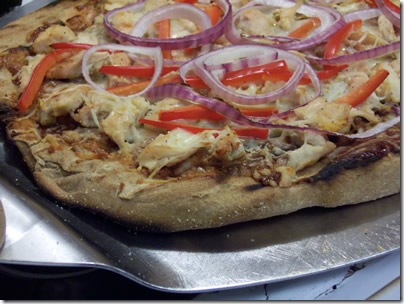 We added extra BBQ sauce instead of the rub and pepper flakes.  Although I’m sure my sons would’ve loved the pepper flakes, I kind of forgot. 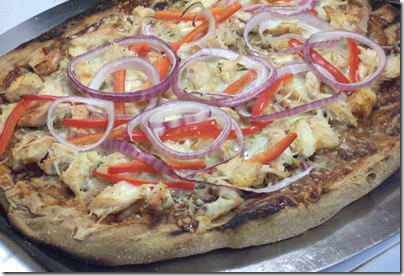 Slice and serve immediately.  Not that I needed any urging to do that. 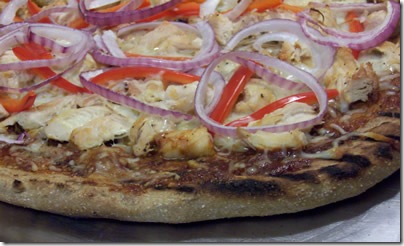 I thought this pizza tasted wonderful, particularly since it had a whole wheat crust. My oldest son just shook his head up and down when he took a bite – that’s a good thing!  When I told him it was 100% whole wheat, he said, “I don’t taste it!”  Another good thing.

My youngest son ate dinner at a friend’s house so he didn’t try it until later.  When I asked him how he liked it, he said “it was awesome!”  It was then I told him that the crust was 100% whole wheat.  He was very surprised and had a pleasant smile on his face. He told me it’s the best pizza I’ve made yet and “it’s grilled”. Something about guys and grills I guess.

I baked the other pizza on the pizza stone in the oven to compare and there was a big difference.  The flavor of the whole wheat was definitely stronger.  The baked version was really good, but the grilled pizza just blended all the flavors together much better. 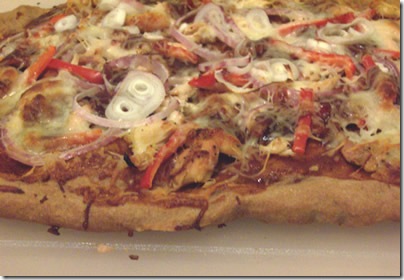 There were a couple of things I liked better about the baked version, however.  For one, I added more BBQ sauce and used only the hickory-smoked which gave it a big flavor burst. I also put all the toppings (chicken, onions, and peppers) under the cheese.  It definitely had a better flavor.

My sons and I loved this pizza. I don’t know that it’s the best pizza I’ve made, but I do think we have a winner here.  Hey!  When you can get your 20-year old and 17-year old sons to eat something that is good for them, it’s definitely a good thing.  I’ll be making this one again.

Thanks for joining me in the bread-baking blog.  Check out Michelle's blog to see what everyone else baked for the March 1st bread braid.

Here are some additional bread-making resources:
You might enjoy some of the other breads that have been featured in the bread making blog.
Posted by Unknown at 12:16