During the month of January, I'm making sourdough breads for the BBA Challenge.  I created a new starter based on the formula in the Bread Baker's Apprentice, but wanted to use my existing starter to see how it compared.

I made the BBA Basic Sourdough Bread using the new starter but I decided to make my go to sourdough bread recipe using my existing starter.  The formulas for the breads are similar but the starters are different.  The BBA starter was created using a mixture of rye and bread flours whereas my existing starter was created with only organic white bread flour.

For the past couple of years, my go to recipe for sourdough bread has been the King Arthur Flour recipe.  It's been a while since I posted about this bread so I thought I would feature it again. I've learned some new techniques since the original post. Read my previous post on classic sourdough here.  The original post also includes instructions for feeding the starter.

My favorite starter (created in 2007) is based on the formula from Boudin Bakery. You can find the formula for my original sourdough starter here. Of course, once I created the starter, it took on the characteristics of my local environment.  I created three different starters in (two in 2007 and one in 2008) but I recently threw two of them away because they eventually all tasted and performed the same. 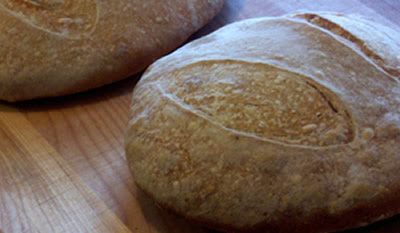 Pour the cup of starter into a large mixing bowl. Add the warm water and about 3 cups of flour. Beat vigorously. I used my Danish dough whisk to mix the ingredients.  It makes things really easy! 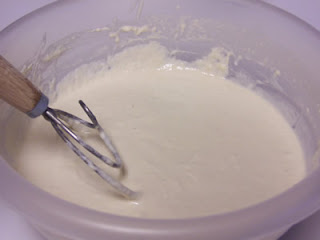 Cover this sponge with plastic wrap and put it aside to work. This period can be very flexible, but allow at least 2 hours and up to 8 hours. A longer period (at a lower temperature) will result in a more sour favor.
At this point, I fed the starter and let it sit out for a couple of hours before placing it back in the refrigerator. 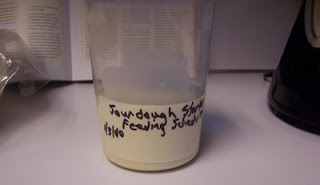 Then, I let the sponge rest on the counter overnight. 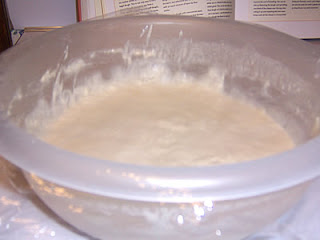 After the dough has bubbled and expanded, remove the plastic wrap.  See how bubbly it is!  Blend in the salt, sugar, and remaining 2 cups of flour. Mix until the dough comes together. 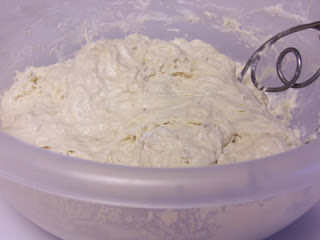 Then knead, using your hands, an electric mixer, or a bread machine set on the dough cycle, until the dough is smooth and elastic. Add only enough extra flour to keep the dough from sticking.  Place the dough in the bowl, cover, and let it rise until doubled, 1 to 2 hours. 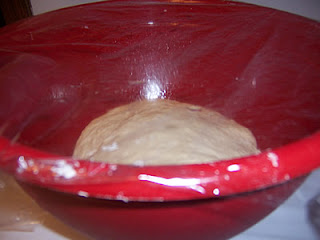 Divide the dough in half. Shape each half into an oval loaf, and place on a lightly greased, cornmeal-sprinkled baking sheet. 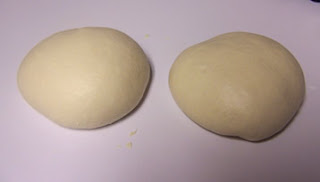 Cover, and let rise until doubled (this can take up to 2 hours).  I decided to bake this bread on a baking stone rather than a baking sheet so I lined the baking sheet with parchment paper sprinkled with cornmeal to make it easy to transfer to the stone. 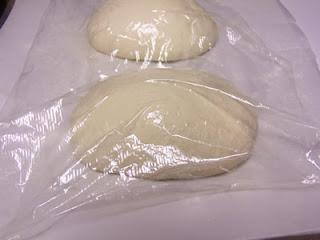 Remove the cover and slash the tops.  I used a serrated knife to slash the loaves. Then, I sprinkled a little bit of flour on top for added appeal. 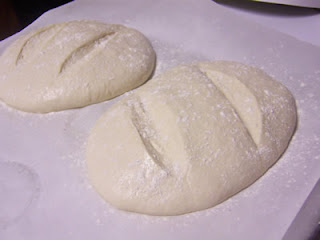 Bake in a preheated 450°F oven for approximately 20 minutes, until golden brown. I preheated the oven for about 15 minutes with the baking stone on the middle rack, then I transferred the loaves from the baking sheet to the stone.
To create steam and hopefully facilitate "oven spring", I spritzed some water on the walls of the oven using a water spray bottle.  I did this a few times in 30-second intervals during the first two minutes of baking.  It worked!  The loaves rose very nicely!  I like it when that happens! 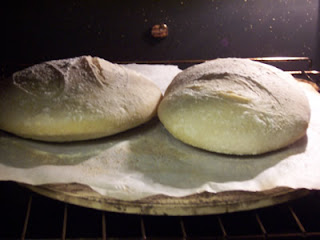 I removed them from the oven using the baking sheet.  Transfer the loaves to a wire cooling rack to cool completely before slicing and serving.

We've been enjoying this bread with homemade vegetable soup.  The loaves have a nice chewy texture.  Very tasty, but not too sour!  Just a hint of sourdough.  I don't like too sour of sourdough. 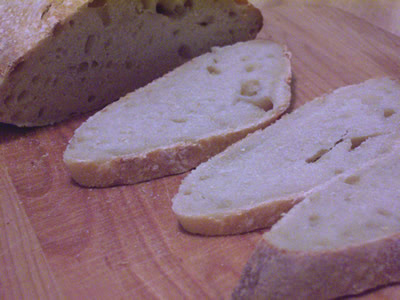 Thanks for visiting The Bread Experience Bread Baking Blog. We hope you enjoyed your visit and will come back soon.