Mini Baguettes and the Train around London

When I visited the UK last year, I toured around London with my son on the train system. It was definitely an experience! Not a bad one just a little hectic at times trying to make sure we were on the right line and knew which stop to take so we didn’t miss our next transfer. 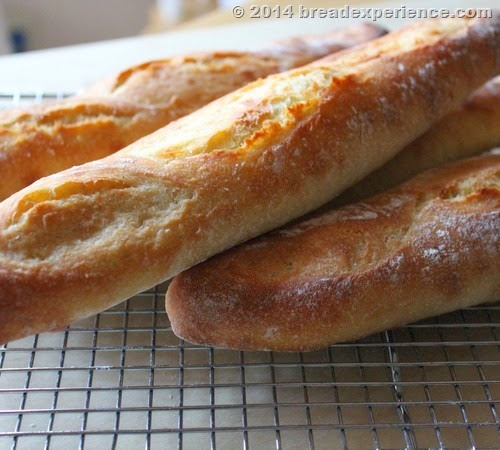 I decided it was best not to rent a car while I was over there because 1) I had never been to London; 2) I’m directionally challenged at the best of times; and 3) they drive on a different side of the road than we do in America. It was confusing enough just figuring out which way the cars would be coming at you when you wanted to cross the street. You can laugh all you want, but they actually have signs in a lot of areas that tell you which direction traffic is coming from. Good thing too.

We utilized the London transit system and as a result, were able to enjoy a totally different view of London. The train stations were so big, they reminded me of an airport.

In these stations, they had all sorts of shops and places to eat. This made things very convenient. While you were waiting to catch the train, you could shop and have lunch. Or bring your food to enjoy on the train ride. This might seem silly, but I’m used to MARTA, the Atlanta rapid transit system, and you don’t eat on those trains. Well some people do, but that’s another story.

I really liked the sandwiches over there. I love bread, but I’ve never been a big sandwich eater, mainly because I don’t like mayonnaise. I’ve also never been fond of the infamous BLT sandwich nor do I enjoy ketchup, but I like mustard. I also like PB&J sandwiches, egg salad, tuna salad and some ham and turkey sandwiches, but only if they are spread with mustard. Well it just so happens that they eat mustard over there. It’s a different mustard, but mustard just the same. I was okay with that! 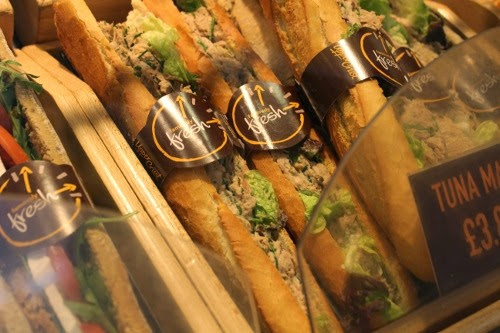 While we were waiting on a train one day, we went in a place to eat and found these sandwiches made with mini baguettes (photo above). They had all different kinds, but I enjoyed the one filled with tuna.

I liked the sandwich so much I decided to recreate it when I got home. I finally got around to making some this past weekend.

These mini baguettes are very easy and can be made in about 4 hours, not including the overnight Pâte Fermentée. Since I made these with KAMUT all-purpose white flour, I had to adjust the hydration in the final dough. Instead of 70% hydration, these are about 84% hydration, but keep in mind that KAMUT flour is more absorbent than regular bread flour so if you use regular bread flour, you might want to reduce the hydration to 70-75%. 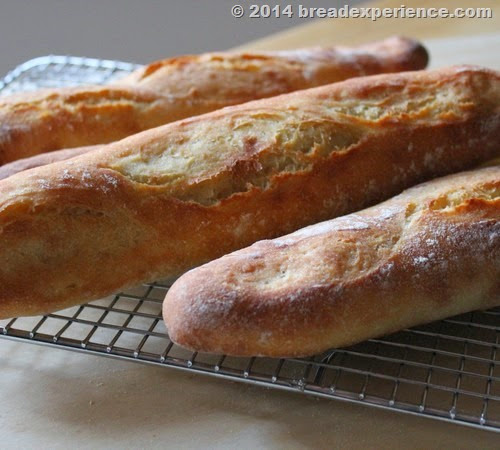 Adapted from: The Fundamental Techniques of Classic Bread Baking by The French Culinary Institute

* The formulas for Pâte Fermentée seem to make way too much for one batch so I reduced the formula by 4.

Combine the KAMUT flour, salt, yeast and water in a small bowl. Mix by hand until completely blended and knead a minute on the counter. It will be quite stiff. Place it back in the bowl and cover with plastic wrap. Let it rest in the refrigerator at least 8 hours or overnight.

The next day, remove the Pâte Fermentée from the refrigerator, cut it into several pieces, cover the pieces with plastic wrap, and let them warm up to room temperature before mixing into the dough. 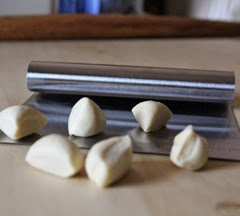 In the bowl of a stand mixer, combine the KAMUT flour and water using a dough hook. Mix on low speed until the mixture is blended. Turn the mixer off and let the dough autolyse for 15 minutes.

Add the salt, yeast and Pâte Fermentée and mix on low speed for 2 to 3 minutes.  Increase the speed and mix for about 5 minutes, or until the dough comes together but is still slightly sticky.

Transfer the dough to a lightly oiled bowl. Cover with plastic wrap and let it ferment at room temperature for 1 hour. 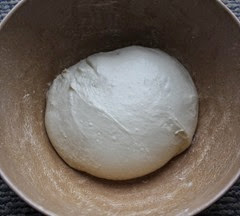 An hour before you plan to bake the loaf, preheat the oven to 450 degrees F. with a baking stone on the bottom rack and a steam pan or iron skillet on the top rack.

Lightly flour a work surface. Uncover the dough and divide it into four 6.50oz pieces. Shape the pieces into rough logs, cover with plastic wrap and let them bench rest for 15 minutes.

Uncover the dough again and lightly flour surface again if necessary.  Gently press and shape the dough into a baguette.

Place each baguette seam-side down on a floured baker’s couche and bring up the folds of the couche to hold the shape of the loaves. Cover with plastic wrap and let them proof for 30 minutes.

Uncover the dough again and score them using a lame or razor. Sprinkle a little flour on top of the loaves before scoring so you don’t drag the lame.

Carefully transfer the loaves to the preheated baking stone. I used my pizza peel and one of the loaves got a little stuck so it ended up with curved shape.

Add several ice cubes to the steam pan or iron skillet and immediately close the oven door. Bake, with the steam, for 25 minutes, or until the crust is a deep golden brown in color. The sides should be firm and the bottom should sound hollow when thumped.

Remove the loaves to wire rack to cool. 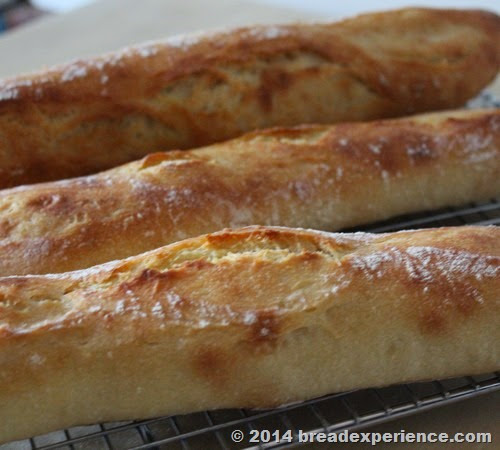 I made tuna sandwiches with these loaves.  The photo of the sandwich didn’t turn our very well, but here is a picture of the crumb. 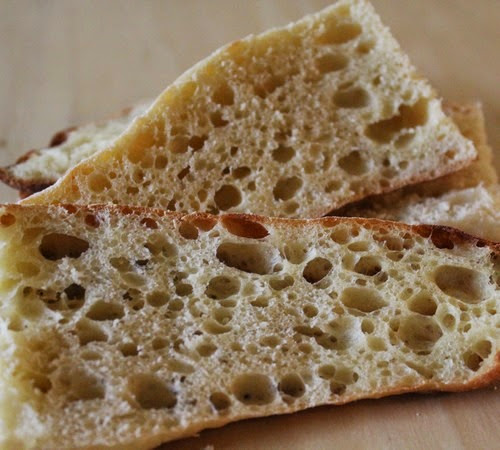 I’m submitting these baguettes to Bread Baking Day #66, Ultimate Baguettes hosted by Karin from Food for Angels and Devils.