My Teddy Bear Bread and Dolls

I adore Teddy Bears!  When Carola of Sweet and That’s it announced she was creating a Teddy Parade, I knew I had to make one, but I was hesitant to join in the fun due to my Santa Bread misfires. I had worked so hard on the Santas only to have them disfigured in the oven. I didn’t want that to happen with the Teddy Bear. 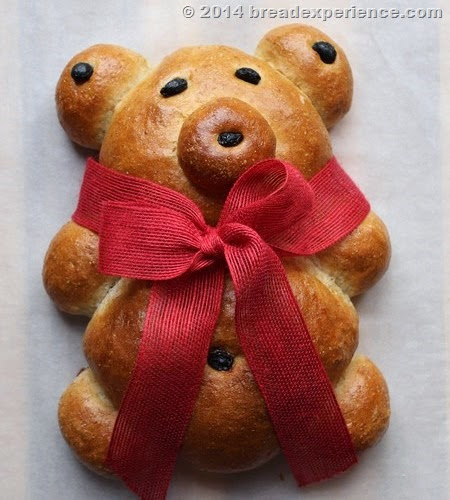 I used to sew a lot, and I especially liked to make dolls. I had made Teddy Bear Dolls before, but never Teddy Bear Bread. 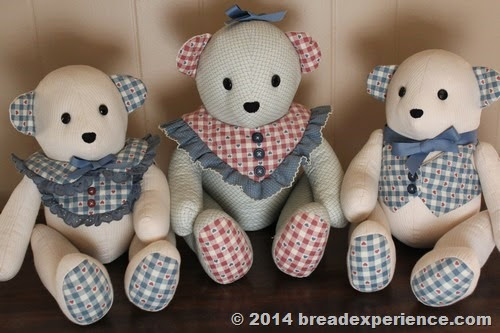 My son chewed the nose off of his bear when he was little. The poor bear looks a little worse for the wear, but we still love him. 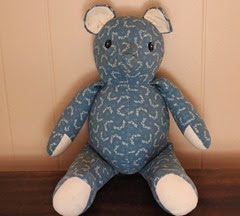 The more I thought about the Teddy parade, I realized that since I enjoy making bears and baking bread, I just had to incorporate the two crafts.

I decided to give the Teddy Bear Bread a chance. I wasn’t going to let this dough-shaping or doll-shaping dough get the best of me this time. I had a plan. 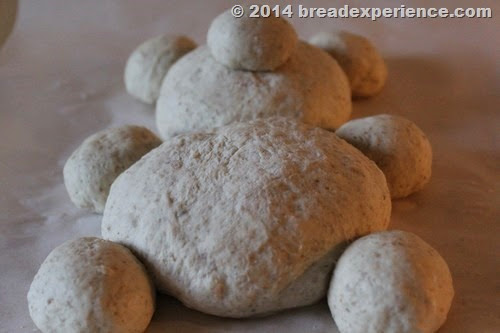 As I mentioned before, when I made the Santa Breads, each of them looked pretty good before I baked them, but unfortunately, they lost their shape during baking. The third Santa was my favorite, and I was really bummed that he got transfigured during the bake cycle.

I knew why it happened. The instructions only allowed for a final proof of about 15 minutes after shaping. At the time, I thought it was rather odd to have such a short proof, but I followed the instructions anyway.

I shouldn’t have second-guessed myself. Since the dough wasn’t allowed to fully proof before baking, it had tremendous oven spring. Generally, you want good oven spring, but not with decorative breads. They need to keep their shape.

Even though Santa Bread #3 ended up looking more like a dog than Santa due to the oven spring, I really enjoyed working with that dough. I decided to use the same dough for the Teddy Bear Bread, but this time, I proofed it longer so it would be fully risen and not lose it’s shape in the oven. My trick worked. 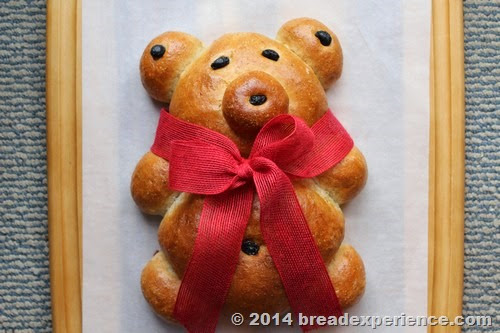 Adapted from: Teddy Bear Bread on Taste of Home and Whimsical Santa on the Martha Stewart site

1. Add the flours, salt, and yeast in the bowl of a stand mixer.  Blend well. Turn the machine to first speed and gradually add the water until the dough comes together. Mix until the dough pulls away from the sides of the bowl.

2. Turn out the dough onto a floured surface. Knead by hand until smooth and elastic. Shape the dough into a ball and place in a lightly greased bowl.  Cover with a towel or plastic wrap and let it proof until doubled, about 1 hour.

3. Punch dough down and transfer to a lightly floured surface. Divide the dough into 1 large ball, 1 medium ball, 6 small balls and 1 slightly smaller ball for the nose. Adjust the size of the balls according to the shape/size you want.  I had to play around with the sizes a little bit to get the final shape I was looking for.

I had fun with this bread. Thanks to Carola for hosting the Teddy Parade.