This is not your ordinary multigrain bread.  This 5-grain loaf is made with all-purpose and whole grain spelt four, oat and rye flours and brown rice flour.  Carola, of the Back to the Future, Buddies chose to revisit this bread for the monthly bake for March. 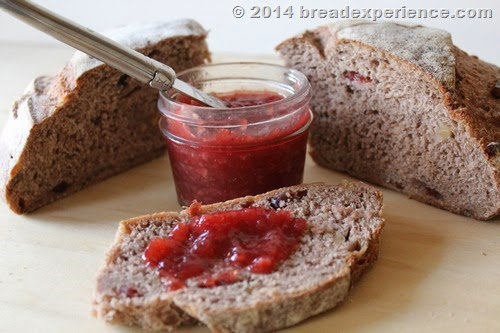 The Bread Baking Babes made a version of this bread back in 2009, but I missed it. I’m glad I got the chance to try it this time. I enjoyed this loaf spread with homemade Cran-Strawberry Jam.  It was delish!

The loaves can be made with all-purpose flour and whole wheat flour, but I wanted to make my version using a good portion of ancient grains so I used Spelt instead.

If you want to make pan loaves instead of hearth loaves and use all-purpose flour instead of Spelt, refer to Carola’s post.

This bread can be baked in a loaf pan, but as I was kneading the dough, I realized that because I had changed the grains and the hydration level of the dough, it would make a wonderful freeform loaf. So that’s what I did. I baked the loaves in a preheated Emile Henry Cloche. The dough was well suited for baking in the cloche. 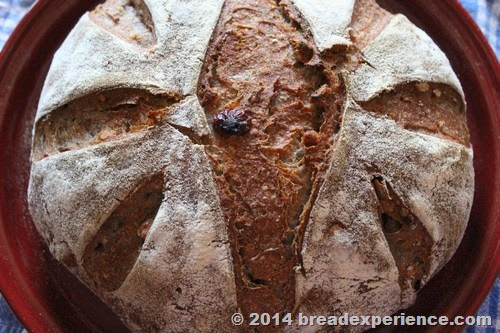 This bread is supposed to be about the walnuts, but unfortunately I didn’t have the amount of walnuts called for because I got hungry for a snack one day and ate most of the stash of walnuts I bake with. It made a very tasty snack, but left me with only about 100 grams of walnuts. To compensate, I added 100 grams of dried cranberries and then I added some more. The combination of the walnuts and cranberries, along with the spelt, rye, oats and brown rice flour, made a tasty loaf of bread.

I tried two different scoring methods and a new pattern. I think it’s my new favorite. I used a curved scoring tool, and I really like the way the loaf opened up. I proofed the loaves in lined banneton baskets, and I really like the contrast of the flour design the lined baskets left on the cranberry-colored loaves. 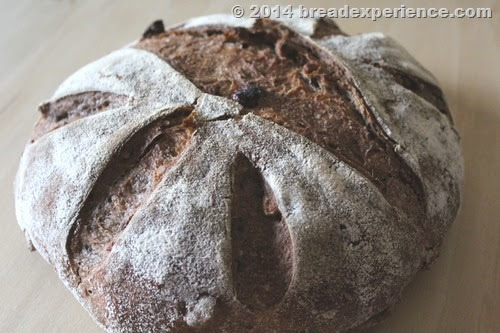 Adapted from: The Italian Baker by Carol Field

Toast the walnuts. You can toast them in the oven for 10 minutes (400°F/200°C), but I find it easier to toast them in a pan over the stove. Let them cool down and then chop them coarsely with a sharp knife or in a food processor fitted with the steel blade or. Do not grind them finely or you’ll miss out on the walnut crunch.

I mixed the dough by hand since ancient grains, especially Spelt don’t like to be over mixed.

Sprinkle the yeast over the warm water in a large mixing bowl; let stand until creamy, about 10 minutes. Stir in the water.

* I held back some of the water because Spelt doesn’t absorb water the same way that all-purpose flour does. I used about 675 grams of water. If you make this bread using different flour, you might need more water.

Mix the flours, and salt and stir into the dissolved yeast, 1/2 cup at a time stirring vigorously with a wooden spoon or Danish dough whisk. The dough should come together fairly easily.

Transfer the dough to a floured surface and knead in the cranberries and walnuts. Sprinkle the dough with additional Spelt flour as needed, and knead for a few minutes.  The dough will still be tacky. Don’t over knead it!  Spelt requires a shorter mixing time due to the fragile proteins.

First Rise (and retard in refrigerator)

Place the dough in a lightly oiled bowl and cover with plastic wrap. Let it rise until doubled, about 1 hour.

The dough had doubled in size, but it was still pretty tacky. So after the first rise, I deflated the dough, folded it into a ball and placed it back in the bowl and recovered it with plastic. I let it retard in the refrigerator overnight. You can try this to add flavor and structure to the dough or continue to the shaping and second rise if you prefer.

If you retard your dough in the refrigerator, the next day, bring the dough to room temperature before shaping.

Shaping and Second Rise (or retard in refrigerator):

Turn the dough out onto a lightly floured surface. The dough should be firm and noticeably elastic. If you retarded it in the refrigerator, it shouldn’t be sticky anymore.

Cut the dough in half and shape each piece into an a round boule.  Let the balls rest on the counter for 10 to 15 minutes. Dust two lined banneton baskets with a mixture of spelt/rice flour.  Reshape the dough into tight boules and place seam side up in the baskets. Cover with plastic wrap and let rise until fully doubled about an hour to an hour and a half. Or, immediately place the covered baskets in the refrigerator again and let the loaves retard for 5 hours. That’s what I did.

Preheat the Oven and Bread Baker:

Preheat the oven to 450°F (205°C). with the Emile Henry Cloche, La Cloche,  Dutch Oven or other baking pot on the bottom rack.  Let it preheat for at least 30 minutes before baking the loaves.

When you’re ready to bake the loaves (after 5 hours), remove the baskets from the refrigerator and gently turn the loaves out onto a piece of round parchment paper cut to fit the bottom of the Emile Henry Cloche.

Score the loaves using the pattern of your choice. As I mentioned, I used a curved lame and scored 2 different patterns.

You can leave one loaf in the refrigerator and prepare it while the cloche or Dutch oven is getting back up to 450 degrees again, or you can take them both out at the same time.

When the oven and bread baker have preheated sufficiently, remove the lid and carefully transfer the scored loaf to the bottom of the baker. I used a pizza peel to slide the loaf (on the parchment paper) onto the bottom of the cloche like you would slide it onto a baking stone.  This worked really well for me. I didn’t have to worry about getting burned.

If you are using a Dutch oven, you can invert the loaf directly into the bottom, just be very careful because it will be really hot.

Place the lid on the baker and bake the loaf for 40 to 45 minutes (or until the bread's internal temperature reaches 200°F - 93°C).  Remove the lid and the parchment paper during the last 10 to 15 minutes of baking to brown the bottoms and sides.

Let the loaves cool completely on a wire rack before slicing and serving. 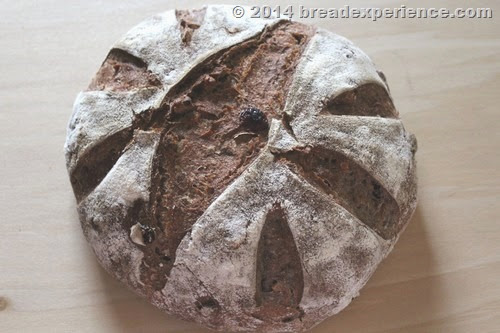 I thoroughly enjoyed making and eating this bread.  It is delicious and nutty and makes great toast. Thanks Carola for choosing this bread. 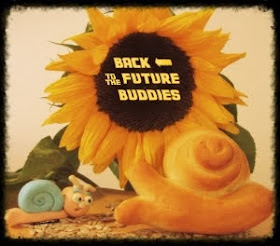