Bread Baking Day (BBD), established by Zorra in 2007, is celebrating it’s 6th anniversary. The theme for BBD #60 is Glazed Bread.

In honor of this special occasion, I made Cinnamon Crunch Swirl Bread.  My oldest son loves cinnamon so I made this loaf for him. He doesn’t like raisins or nuts in his bread so I omitted them. If you like raisins and/or nuts, feel free to include them for additional flavor and texture. 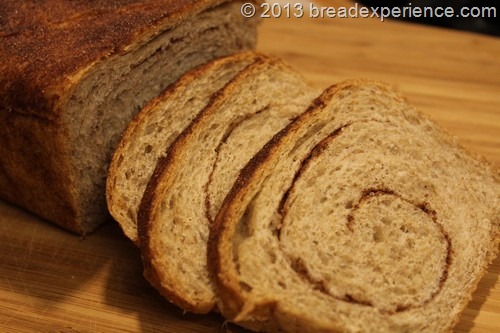 Adding a glaze or wash to the crust of a loaf serves different purposes, depending on the type of glaze you use.  A glaze or wash can be used to provide a crusty exterior, soften the bread or to give it a beautiful color and sheen and to provide added flavor. There are a number of ways to add a glaze to breads. Some of the most common types of glazes are egg wash, melted butter or oil, milk, a mixture flour and water, or plain water. 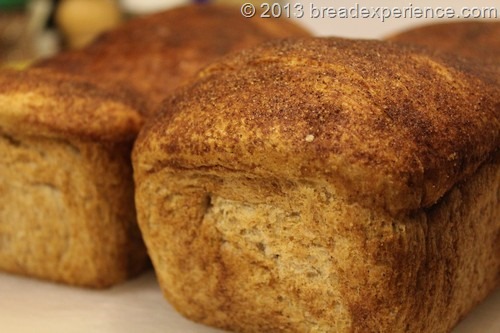 Adapted from the Bread Baker’s Apprentice by Peter Reinhart

Stir together the dry ingredients: flours, sugar, salt, yeast, and cinnamon in a large mixing bowl.  Mix in the egg, butter, milk, and water.  Stir with a large wooden spoon or a Danish dough whisk until the ingredients come together to form a ball.  Add flour or water as necessary to make a workable dough that isn’t too sticky or dry and stiff. 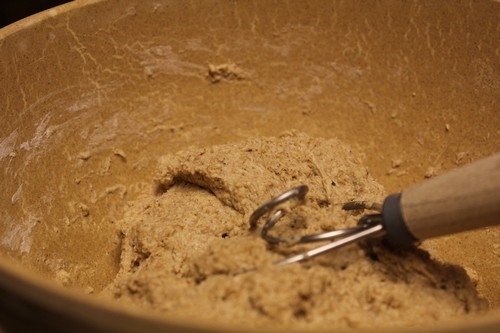 Transfer the dough to a lightly floured surface, cover it with plastic wrap or a kitchen towel (or bowl) and let it rest for 15 minutes.  After the dough has rested, knead the dough until it is smooth and supple, about 10 minutes.  Add flour as necessary to achieve the desired texture.  If you want to add a cup of raisins and/or walnuts, knead them in during the last 2 minutes of kneading and distribute them evenly.

Clean and wash the bowl and lightly oil it.  Place the dough in the bowl, roll it to cover it with oil, then cover the bowl with plastic wrap or a kitchen towel. 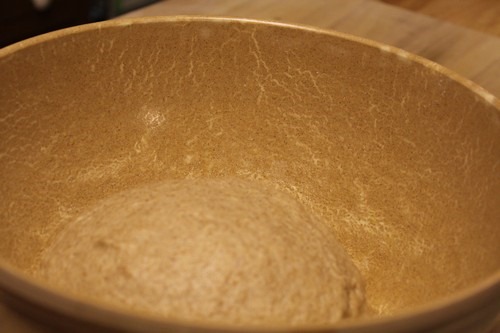 Let the dough ferment 2 hours, or until it is doubled in size.  In this hot weather, my dough was ready in an hour and a half. 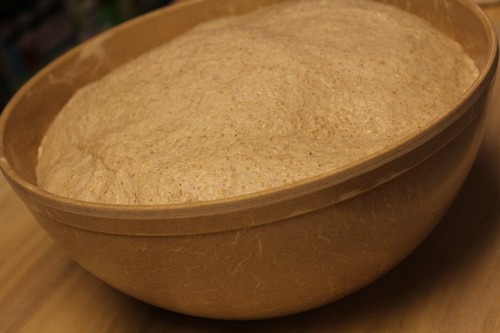 Divide the dough into 2 equal pieces.  Roll each piece out to an 8 x 5-inch rectangle and about 1/3-inch thick.  Brush with melted butter and sprinkle with cinnamon sugar.  Roll the dough into a tight sandwich loaf (jellyroll style). 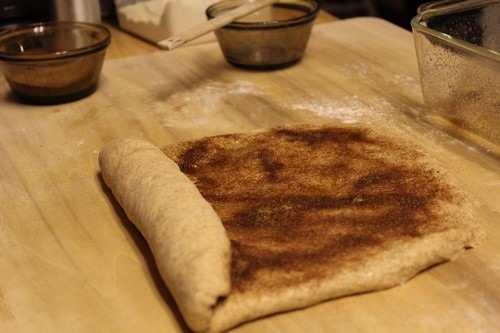 Pinch the seam closed with your fingers. 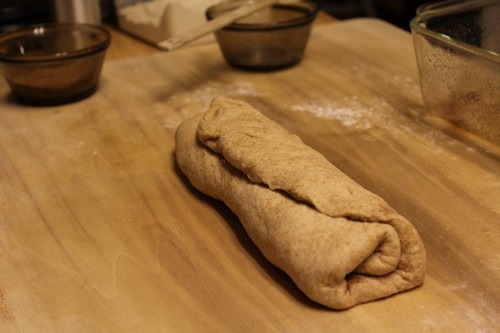 Lightly oil two 8 1/2 x 4 1/2-inch loaf pans and sprinkle the bottom and sides of the pans with cinnamon sugar.  Place the loaves seamside down in the pans.  Spray the tops lightly with spray oil and cover with plastic wrap. 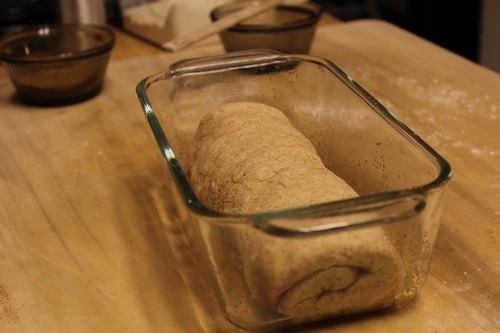 Proof the loaves at room temperature for about 60 to 90 minutes, or until the dough crests above the tops of the pans.  It should be nearly doubled in size. 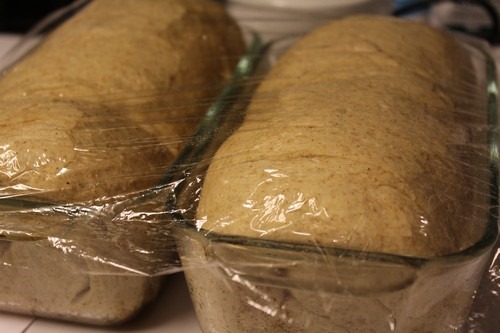 6. Preparing the Loaves for Baking

Preheat the oven to 350 degrees F. with the oven rack on the middle shelf.

Brush the tops of the loaves with melted butter and sprinkle with cinnamon sugar. 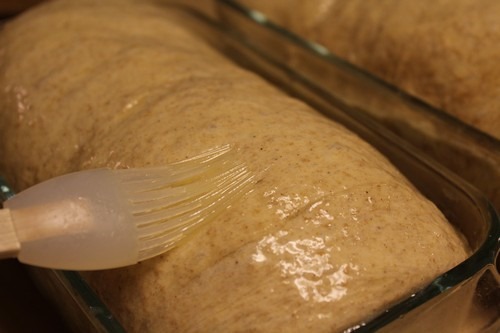 Place the loaves on a baking sheet.  Make sure they aren’t touching each other.  Carefully slide the baking sheet into the preheated oven. 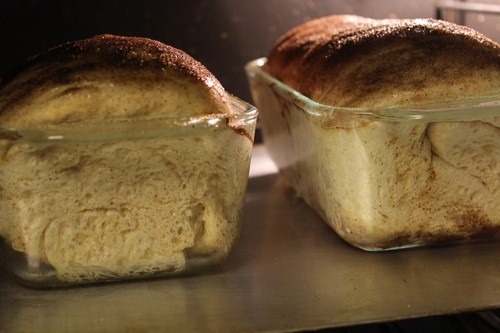 Let the loaves bake for 20 minutes. Then rotate them about 180 degrees for even baking.  Continue baking for another 20 to 30 minutes depending on the oven.  The baked breads should be golden brown on top and lightly golden on the bottom and sides.  The loaves should sound hollow when thumped on the bottom. 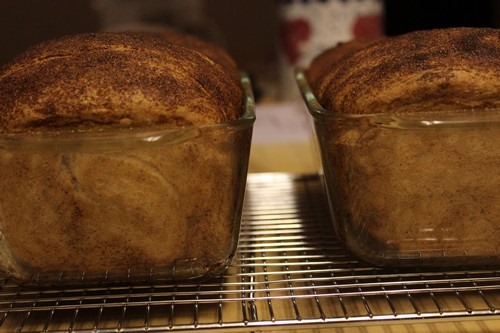 8.  Cooling and Serving the Loaves 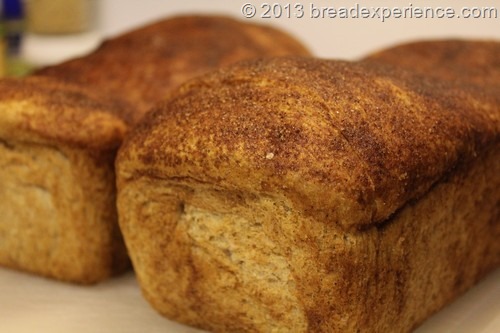 Be sure to check out the BBD #60 roundup on Zorra’s blog.