I’ve wanted to learn more about baking gluten-free breads for some time now.  I really got motivated when I visited the Hostel in the Forest earlier this month and learned that they were trying to go gluten-free.

So, after I got back from my mini vacation, I got all of the ingredients together and made a batch of the Healthy Bread in Five Minutes gluten-free olive oil dough. Most of the bakers in the HBinFive baking group made this bread for the April 15th bread braid, but I didn’t have all of the ingredients at that time so I decided to make this one for the May 1st bread braid instead. 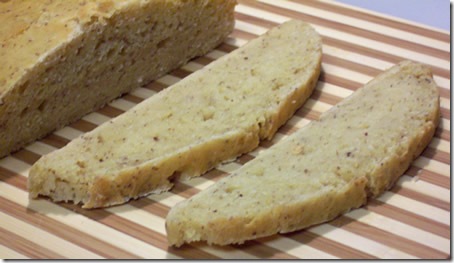 I was in an experimental mood when I made this dough so I tweaked the recipe a bit.  I’m happy to say I liked it!  It reminded me of a flavor that I couldn’t quite wrap my brain and taste buds around.  At first, I thought it tasted a little bit like cornbread even though it doesn’t contain any cornmeal.  My taste tester said the same thing; without any prompting from me I might add.

It finally dawned on me that the flavor it reminded me of was a toasted biscuit. Not canned refrigerator biscuits, but homemade Southern Biscuits. Growing up, we would toast leftover biscuits for breakfast and this is the flavor that this gluten-free bread brought to mind.  I’m really not sure why because it doesn’t include any wheat flour.  However, I did toast the soy flour so that could be why.  At any rate, I liked it!  As you can see by the photo below, it does look rather toasty. I made the full batch of dough, but as I mentioned, I tweaked the recipe a bit because the dough was really wet.  It was more like batter than dough and I wanted to be able to shape it.  I used a combination of home-milled brown rice flour, toasted soy flour, tapioca starch, potato starch, cornstarch, and flax seed meal (instead of the xanthan gum).

To get the consistency right, I ended up using about 1/2 cup more soy flour and added a little bit of potato starch in addition to the cornstarch and tapioca. Not that I really knew what I was doing, I just kept tasting the dough to see what it was like and it tasted terrible!  Even though the recipe didn’t call for it, I added some honey.  I still didn’t like the flavor. It was a little bit bitter so I added some agave syrup.  I finally got the consistency of the dough so that I could at least shape it somewhat once it was refrigerated.  The flavor was still weird, but I decided to leave it alone. I let the dough sit on the counter for 2 hours.  I transferred it to a bigger container so it wouldn’t overflow. 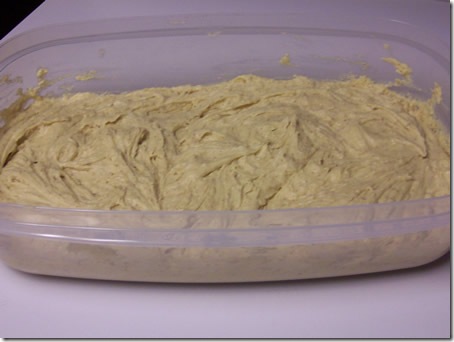 This is what it looked like after sitting on the counter for 2 hours. 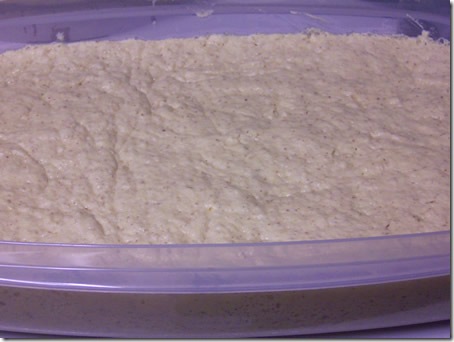 Then I put it in the refrigerator overnight (actually for 3 days).  After I took it out, it smelled and tasted terrible!  However, I decided to bake with it anyway. 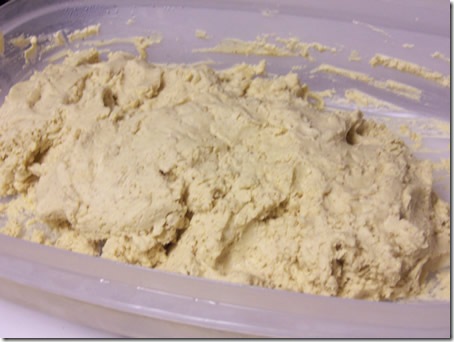 I measured out a one-pound blob. Then I shaped the dough into a ball and let it rest on a piece of parchment paper sprayed with oil for a few minutes. 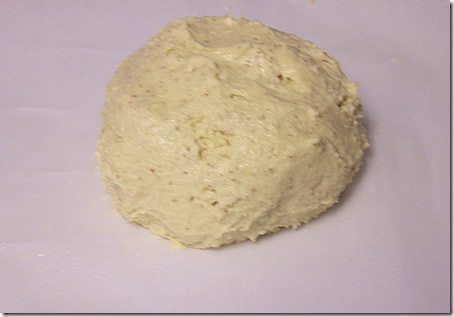 Then I shaped the ball into an oval shape.  I had to use wet hands for this part because the dough was pretty sticky. 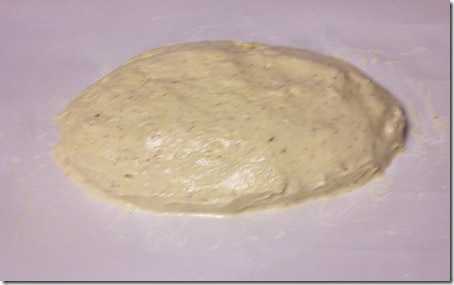 I covered the loaf with plastic wrap and let it rest on the counter for 90 minutes while the baking stone preheated in the oven. 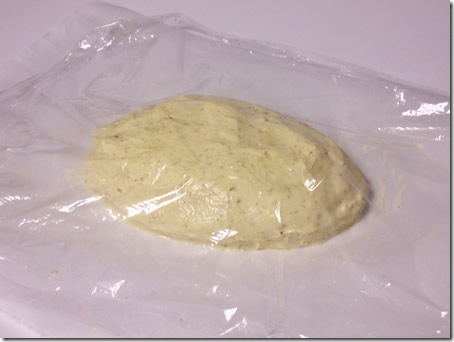 While this loaf was resting on the counter, I shaped another loaf into a baguette (or a reasonable facsimile of one) and covered it with plastic wrap to rest on the counter as well. 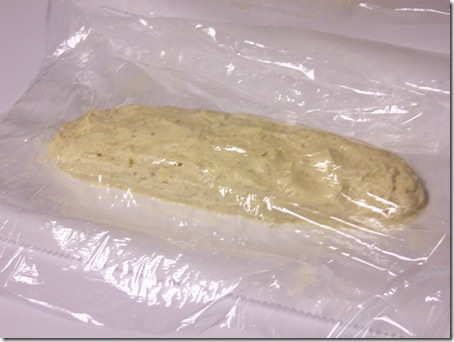 After the loaves had rested for 90 minutes, I placed the first loaf on the baking stone, put hot water in the steam pan and let the loaf bake for about 30 minutes. I rotated the loaf for even baking partway through the baking cycle. Then I removed the parchment paper so that the loaf would bake crisp on the bottom and let it finish baking for a few minutes longer. 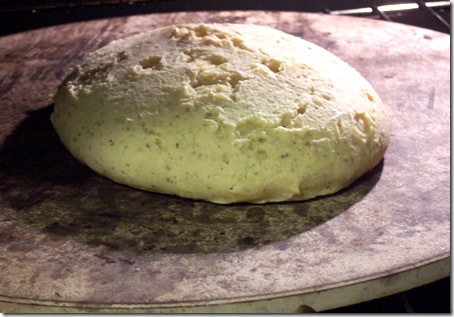 This is one of the finished oval loaves.  I made two of them. While the oval loaf was baking, I spritzed the baguette with water and sprinkled sesame seeds on top. Then, I made two diagonal slashes in the loaf but they didn’t stay very well since the dough was so wet. 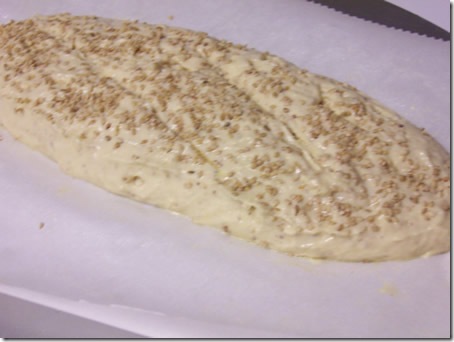 Then it was time to put this baby in the oven. I baked it for about 30 minutes and rotated it partway through the baking cycle for even baking. I didn’t remove the parchment paper on this one, but the bottom turned out crispy anyway.  I removed it from the oven after it finished baking. Then placed it on the cooling rack to cool for a little while. 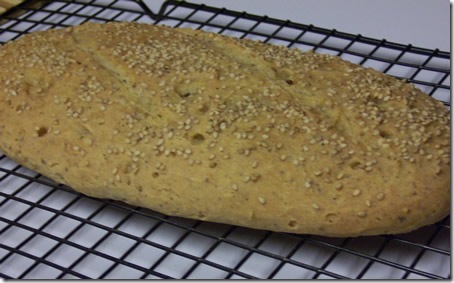 I wish I had only made one loaf at a time because this bread tastes better hot and doesn’t stay fresh very long. I also made pizza with the dough on a different day.  I spread the dough into a round circle with my fingers. 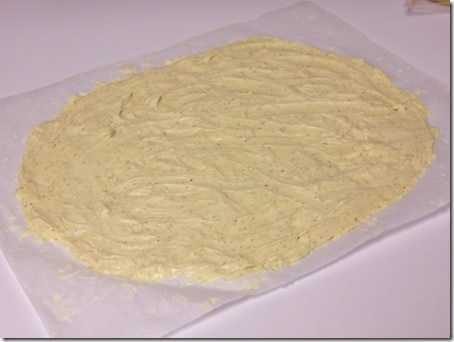 Then par baked it for a few minutes. I didn’t use the toppings suggested in the book.  I just topped it with what I had: pizza sauce (sprinkled with Italian seasoning), pepperoni and cheese. 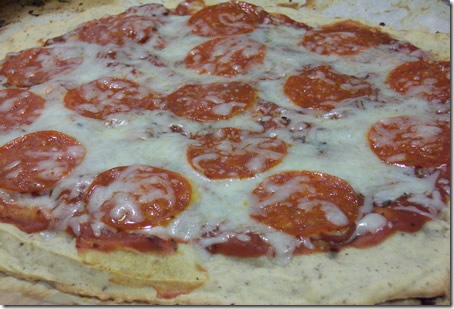 It was okay.  I think we’ve been spoiled with all of these delicious pizzas I’ve been making lately so this was a little bit bland.  We liked the dough as bread but not so much as pizza.  Although my oldest son said it really wasn’t the dough, it was the flavor – or lack thereof.  If I use this dough for pizza crust again, I will add peppers and onions for more flavor.

Although I liked this bread, the main drawback is that it really doesn’t last very long.  It tasted really good fresh from the oven. The next day, it was really dry but still tasted good toasted. The 3rd day it was really dry. The rest may go to the birds since we can’t eat it that fast.

The HBinFive Baking Group, started by Michelle of Big Black Dogs, is baking through all of the breads in the Healthy Bread in Five Minutes book. For more information on the new HBinFive baking group, check out Michelle's blog.