They say practice makes perfect, right?  Well, I've been practicing the HBinFive Whole Wheat Wreath Bread.  I made it three times. It's still not perfect, but I ran out of dough.  So this is what you get. 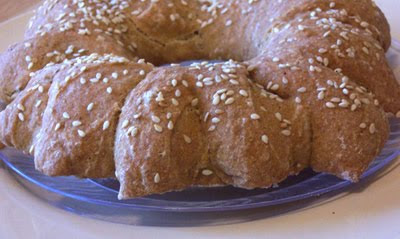 The HBinFive Baking Group, started by Michelle of Big Black Dogs, is baking through all of the breads in the  Healthy Bread in Five Minutes book. For more information on the new HBinFive baking group, check out Michelle's blog.

To make this bread, all you have to do is take the amount of dough you need out of the refrigerator (1/2 pound) and shape it. 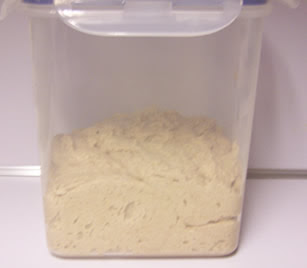 Shape the dough into a ball (boule). I placed the boule on parchment paper so it would be easier to slide onto the peel without messing up the shape. 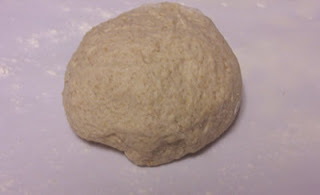 Next, poke your thumbs through the middle of the dough to form the shape of a couronne.  Refer to this post for more info on shaping a couronne. 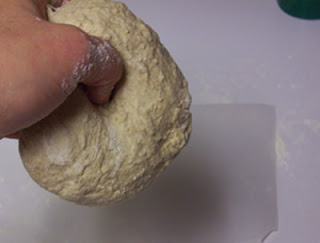 The first time I tried this, the dough was so wet it kept tearing during this step.  I added more flour on subsequent attempts which made it much easier to shape. 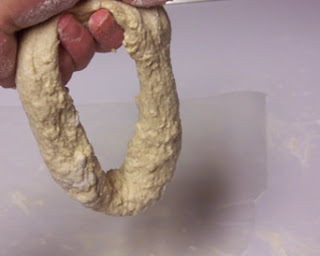 Stretch it with your hands so that it's about triple the width of the size of the wall of the ring.  The first and second time I made this bread, I stretched it more. 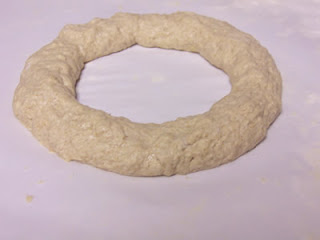 The third time I tried this, I didn't stretch it quite so much. I thought it might look better with a smaller ring. 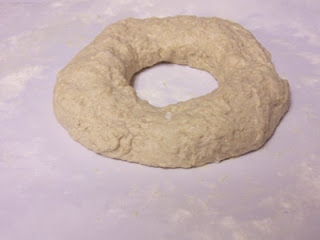 Let the dough rest, loosely covered with plastic wrap for about 45 minutes. The dough rose much better on the third try. 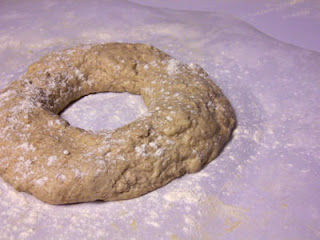 Right before baking, dust the loaf with flour and use kitchen shears to make shallow cuts at an angle like you would for an Epi. Visit artisanbreadinfive.com for more info on shaping Pain d’Epi.
I'm still working on getting the cuts right.  My third attempt worked better, but I still think I could use some more practice.  I'm sure I'll be making this bread again sometime soon. 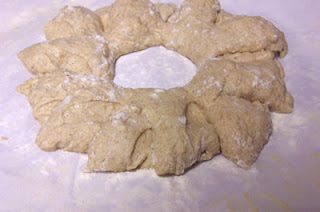 Before baking, I spritzed the loaf with a little bit of water, then sprinkled it with sesame seeds. Then I slid the loaf onto the baking stone using a pizza peel. 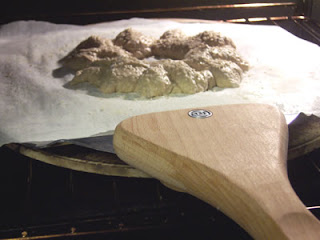 Next, to create steam, I poured 1 cup of hot tap water into the steam pan and quickly closed the door.  Then, I baked the bread for 25 minutes. About halfway through the baking cycle, I removed the parchment paper so that the bread would heat evenly on the bottom.

On my first and second attempts, the bread didn't rise very much. 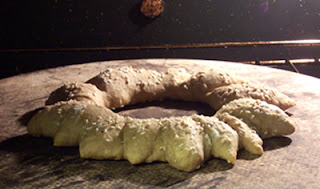 The third time, it had nice oven spring, but lost some of it's shape. 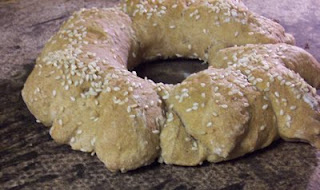 Once the bread was evenly browned and firm, I let it cool on a wire rack. 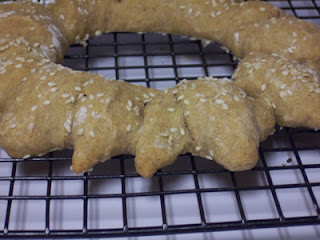 I'm not really sure which version I like better.  I like the shape of the second one because it held it's shape better during the baking cycle.  However, the third one looks tastier to me. Both of them taste good with Festive Marmalade so I guess it doesn't matter. 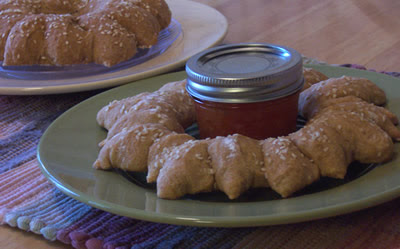 Thanks for joining us today in the bread-baking blog.  Look for more breads from the Healthy Bread in Five Minutes Baking Group.  If you want more info on the HBinFive baking group, click here.
Happy Baking!
Cathy