KAMUT & Rye Levain On the Spot

Recently, I was inspired to create a special bread for a friend of mine. I wanted the bread to encapsulate some of his favorite ingredients, but also be unique, so I chose a blend of sourdough, KAMUT and rye. 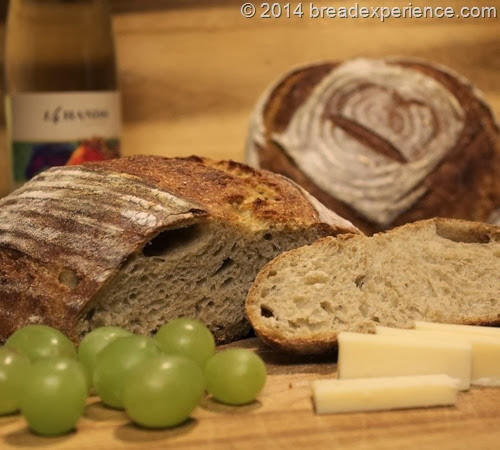 Once I decided on the flours I wanted to use, I consulted Flour, Water, Salt & Yeast by Ken Forkish for further inspiration. My bread is similar to Field Blend #2, but I used KAMUT instead of regular bread flour and whole wheat, and I utilized a different baking method.

I called this bread “on the spot” because my friend took a bite, pointed at the bread and with mouth full, said “oh this is good!. I asked him to describe what he liked about it. He thought for a minute, then said, “It’s, how do you say it? On the spot!”  I think he meant “spot on” but I like “on the spot” better.

This is a friend I met while I was working on my masters; right before I started the Bread Experience. He’s tasted a lot of my breads and has always been a gracious taste tester. He loves sourdough and has suffered through my many attempts before I actually developed my starters into something edible. So when he said it was “on the spot” that meant I had reached it. Woohoo! 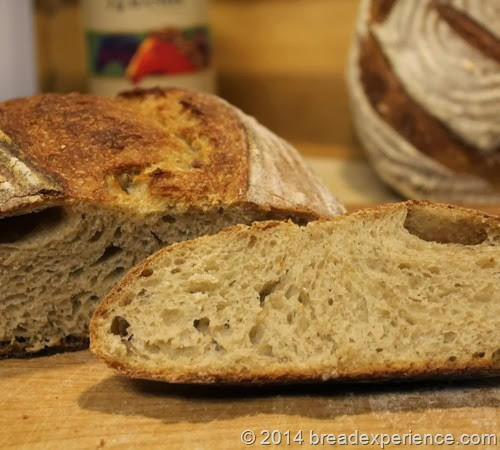 I had been pondering whether to bake this bread in a bread baker or freeform on a baking stone when I saw a post on Facebook from one of my fellow bread bakers. He was encouraging us to make use of different baking methods and not just focus on Dutch oven baking. That settled it, I was going to bake these loaves freeform on the baking stone instead of in a pot.

In the process of creating the bread, I also created a new KAMUT starter. It was so easy! I’m not sure why I didn’t do this before.

KAMUT and Rye Levain On the Spot

Adapted from: Flour Water Salt Yeast: The Fundamentals of Artisan Bread and Pizza by Ken Forkish

Take 100 g of recently fed starter (within 24 hours) and pour in 450 g of warm (80 – 90 degrees F.) water to break up the starter. Add in 400 g white KAMUT flour and 100 g of whole grain KAMUT flour and mix until it is incorporated. Let the levain rest for 6 to 8 hours or overnight at room temperature before mixing the final dough. 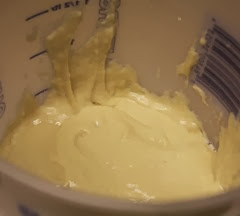 In a large mixing bowl or container, whisk together all of the white KAMUT, whole grain KAMUT and rye flours.  Pour in 620 g of water and mix by hand until incorporated but don’t over mix. Cover the bowl and let it rest for 20 to 30 minutes.

This dough will probably be a little stickier due to the rye flour, but it’s a wonderful dough. 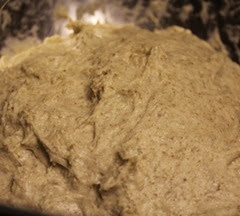 Sprinkle 21 g of sea salt and 1/2 tsp. instant yeast over the top of the dough.  Using wet hands transfer 360 g of the levain into the bowl

Mix the dough by hand using wet hands to incorporate the salt and yeast thoroughly into the dough. Use the fold and turn method to fully incorporate all of the ingredients. Pour in the remaining 30 g of warm water if needed. My dough needed extra water at this point to help dissolve the salt.

Let the dough bulk ferment for 1 1/2 – 2 hours and perform three or four folds, one every 30 minutes. The dough will be ready to divide once it’s about 2 1/2 times its original volume, about 5 hours. I started this process in the evening so after the 2 hour bulk fermentation (and folds), I retarded the dough in the refrigerator overnight. The next day, remove the dough from the refrigerator and let it warm up to room temperature for a couple of hours before dividing it.

Gently remove the dough to a lightly floured surface. Divide the dough into 2 or 3 equal pieces depending on how big you want your loaves to be. 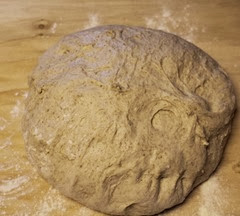 Preshape the loaves into round boules by sprinkling a little flour on the top of the dough and then flip the pieces over. Shape each piece into a tight ball and let them rest for 15 to 20 minutes.

Dust 2 or 3 banneton baskets with a mixture of KAMUT and rice flour. Shape them into tight boules again and place them seam side up in the floured baskets.

Prepare the oven for hearth baking:

At least 45 minutes prior to baking, place a baking stone on the bottom shelf of the oven and a steam pan or iron skillet on the top shelf. Preheat the oven to 450 degrees F.

Carefully flip the loaves from the banneton baskets onto parchment paper. Score the loaves in the pattern of your choice.  I had two rounds loaves and one oval loaf. I scored one of the round loaves with an M (sort of) for my friend and the other round one (not shown) with a B for (bread). I scored the oval loaf straight down the middle

Using a pizza peel or the back of a baking sheet, carefully transfer the loaves to the preheated baking stone. I baked one round loaf and the oval loaf together and baked the other round loaf separately.

Quickly throw 3 or 4 ices cubes into the iron skillet and shut the oven door.  Bake the loaves for about 25 to 40 minutes, depending on the size of the loaves.  The loaves should be dark golden brown in color and sound hollow when thumped on the bottom.

Repeat the process with the remaining loaf. Remove the loaves to a wire rack to cool completely before slicing and serving. 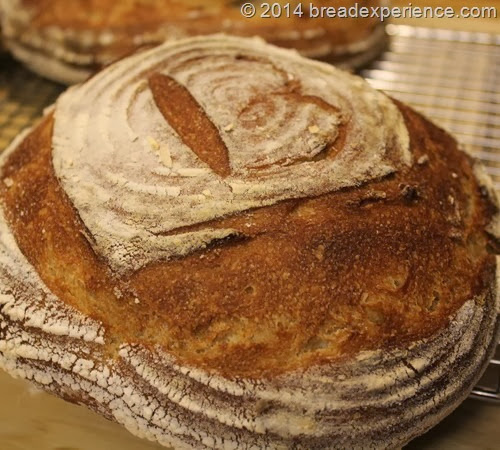 Here is a shot of the crumb.  It was delicious! 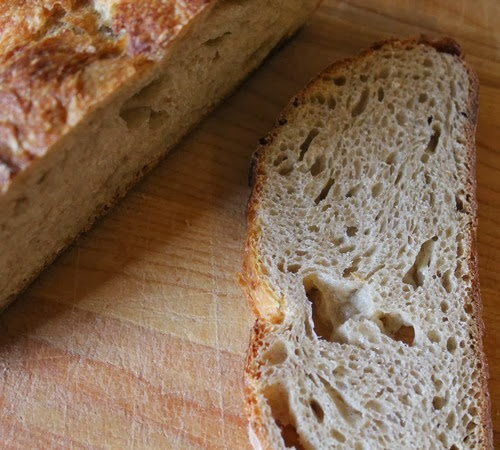 It was dark when I finished baking the loaves so I didn’t have the wonderful sun shining through my kitchen to capture lovely photos.

My friend had arrived by the time I took the loaves out of the oven, and we had fun photographing and tasting some of the bread. He helped create the still life display. I like the shot even though the lighting is a little yellow.  The crumb shot was taken the next day.

The lighting may have been a bit off, but the bread was “on the spot!”