I’ve had this Bread with Sprouted Grain Flour on my list to make for several months. In fact, one of the reasons I bought KAMUT flour was to try this loaf. 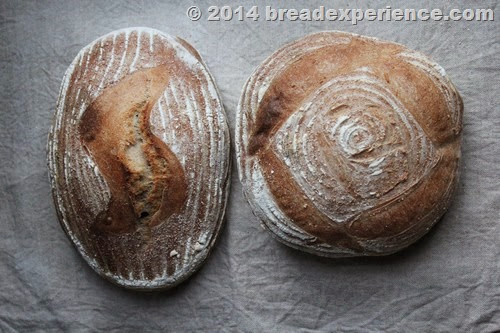 The formula for this bread is from the San Francisco Baking Institute. The original formula made more dough than I needed so I decided to scale the formula down to a more manageable yield. Two loaves seemed about right. I’m currently beta-testing the iPad version of BreadStorm™ and have been looking for opportunities to use it. I figured this handy little app would make this task a piece of cake – or bread, rather. Unfortunately, the measurements from SFBI were in kilograms and the software utilizes grams.

I was just getting used to the idea of doing the conversion manually when I received an email with an updated version of the software. One of the updates allows you to switch between kg and grams. Perfect!  Now, it really would be easy. I like it when that happens. I only had 325 grams of sprouted wheat flour so I plugged that into the software to get the percentages for the rest of the flour.

This bread utilizes a levain made with whole grain KAMUT flour and KAMUT sourdough starter; an overnight poolish made of bread flour, water and yeast; and a soaker made of sprouted whole wheat flour and water. I used sprouted whole wheat flour that I had purchased a while back and stored in the freezer, but you can sprout your own wheat berries and grind them into flour if you prefer.

The final dough adds some additional bread flour and KAMUT white flour. The original formula also included some toasted wheat germ. I didn’t have any so I omitted it. Instead, I sprinkled the top of the dough with spelt bran before baking. 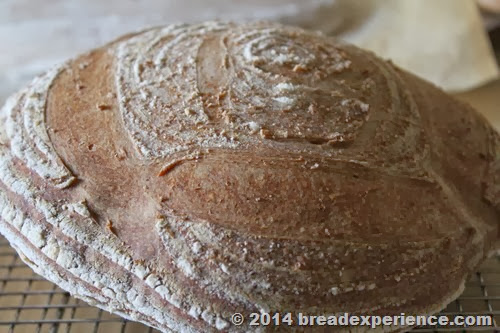 Adapted from: Bread with Sprouted Wheat Flour from the San Francisco Baking Institute

Note: The hydration may vary with the quality and moisture content of the flour. I added 55 g additional water to the sprouted wheat soaker. It could’ve used more water.

Mix all ingredients until well incorporated with D.D.T. of 60°F. 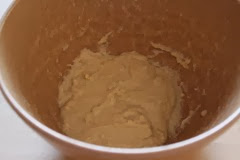 Mix all ingredients until well incorporated with D.D.T. of 60°F. 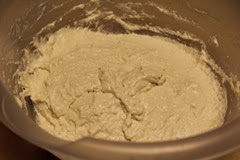 Mix all ingredients until well incorporated. Let it rest for 20 minutes.

I used my stand mixer to mix the final dough.

Add in the poolish and the soaker along with the rest of the ingredients. Mix on 1st speed for 5 minutes. Sprinkle in additional flour if necessary.

Increase to second speed and mix for 3 to 3 1/2 minutes until the dough comes together and pulls away from the sides of the bowl. 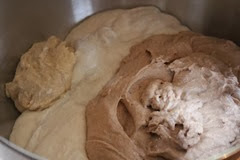 Cover the bowl with plastic wrap and let it ferment at room temperature for 2 hours. I think this dough could benefit proofing a longer proofing time.

Refer to the Tartine Country Bread post for details on folding and turning the dough. 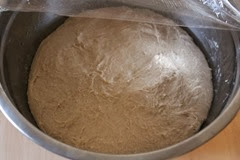 Divide and Shape the Loaves:

Divide the dough into 2 or 3 equal pieces. I made two loaves at about 2.2 lbs. each, but you can make 3 smaller loaves if you prefer.

Preshape the dough pieces into round boules and let them rest for 30 minutes to further strengthen the gluten.

Reshape the pieces into tight boules and place in flour-dusted bannetons (lined or unlined) or shape into blunt batards and place in oval bannetons. I did one of each shape for variety.

Retard Loaves in the Refrigerator:

Cover the baskets with plastic wrap and/or a kitchen towel and immediately place the baskets in the refrigerator.  Let them ferment overnight until ready to bake.

Prepare the oven for hearth baking:

At least 45 minutes prior to baking, place a baking stone on the bottom shelf of the oven and a steam pan or iron skillet on the top shelf. Preheat the oven to 450 degrees F.

The loaves can be baked right directly from the refrigerator.

Remove the loaves from the refrigerator. Carefully flip each loaf from the banneton baskets onto lightly floured parchment paper. Score the loaves in the pattern of your choice.  I tried my hand at making an “S” for sprouted on the oval shape and “B” for bread on the round shape.  The B didn’t turn out so great.

Slide the loaves onto the preheated baking stone using a pizza peel or the back of a baking sheet. I baked each loaf separately because they were to big to both fit on my baking stone.

Quickly throw 3 or 4 ices cubes into the iron skillet and shut the oven door. You can also spritz the oven walls with water if you like. Bake the loaves for about 30 to 40 minutes, depending on the size of the loaves. The loaves should be dark golden brown in color and sound hollow when thumped on the bottom.

Repeat the process with the remaining loaf. Remove the loaves to a wire rack to cool completely before slicing and serving.

Here is the crumb shot of the oval loaf.  I was very pleased with those holes. 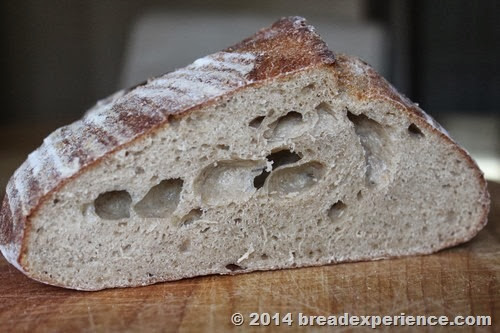 This bread is slightly earthy due to the sprouted wheat flour.  It’s very tasty.  I’ve been enjoying it plain with butter and as crostini topped with red pepper spread and a garlic spread.