The Many Faces of Santa, Bread

It all started a few weeks ago, when Carola, one of my virtual bread-baking buddies, posted a photo of her Santa Bread. It was so cute, I had to try it.

Fast forward several weeks and several Santa’s later. That’s how many times I’ve made Santa Bread. I used the same recipe for the first two attempts, but on the third attempt, I decided the recipe and instructions were just not working for me so I switched to a different recipe. I wish I had done that earlier. It would’ve saved me a lot of grief.

My third Santa is my favorite. I call him Whiskers’ Santa because his whiskers are the most prominent feature on his face. 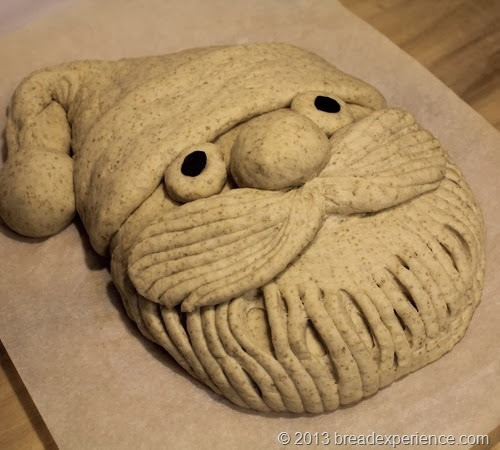 He looked really good before I baked him, but the oven spring changed his features. There’s a life lesson in there somewhere, but I’ll let you figure it out. 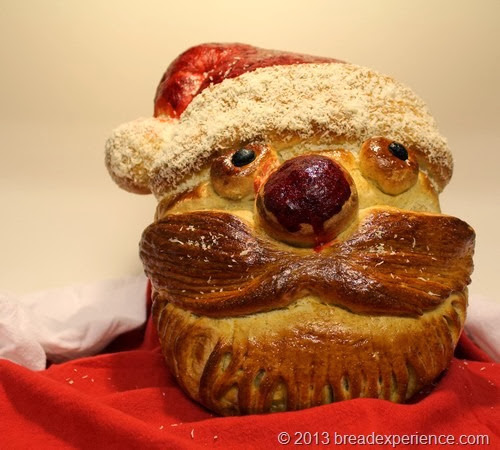 Here are my Santa’s of many faces.

Pirate of the Caribbean Santa Bread

For my first attempt, I used the Golden Santa Bread recipe posted on the Taste of Home site.  I changed the ingredients somewhat because I wasn’t planning on eating him.

I was singing the song “Santa Baby Hurry Down the Chimney Tonight” while I was making this Santa Bread and I must’ve hurried him too much. I didn’t want to mess up the painted egg wash so I didn’t tent the bread right away. I waited for it to bake a little before tenting the bread with foil. I think I waited a bit too long because poor Santa Baby got the edges of his beard singed. 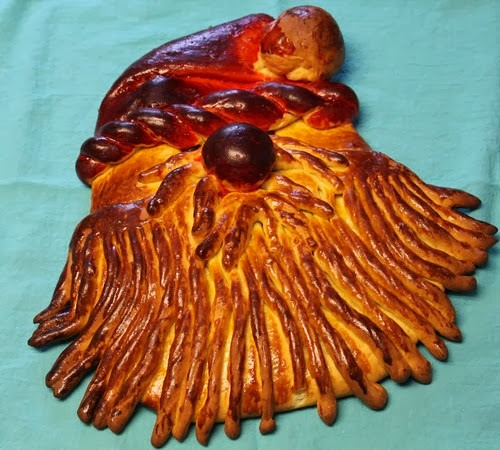 Santa Baby looked pretty good before baking, but then the transformation began. He turned into something different than what I intended. 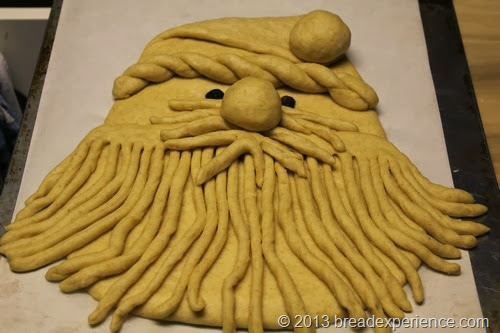 When I baked the bread, the brim of the hat rose so much that it covered up Santa’s eyes. The more I looked at him, the more I thought he looked like a pirate. Or perhaps, Cousin It dressed up as Santa Claus. No disrespect to pirates or Santa (or Cousin It for that matter), but this is what the bread looks like to me.

The recipe was pretty easy to follow until you got to the part where the instructions were missing (between step 4 and step 5).

Here are some photos of the process. Since some of the shaping instructions were missing from the article on the Taste of Home site, and I couldn’t find them anywhere else, I just winged it.

The second time I made this bread, I used the same recipe, but omitted the painted egg wash. I was fairly pleased with this bread except for the hat.  When I was forming the hat, I didn’t stretch it over enough. It didn’t rise very well in the oven so it ended up being a triangle instead of a hat. I think I prefer Santa’s hat on the first version. 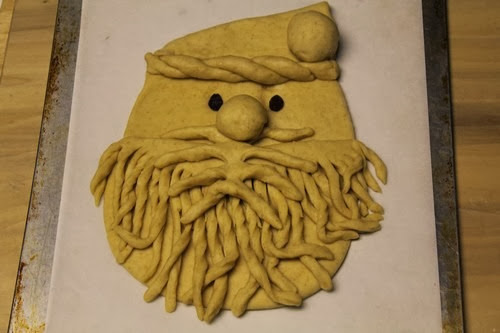 The more I looked at this Santa while I was photographing him, I thought he looked rather French.

The voice of the cartoon character Pepé Le Pew kept playing over in my head. This Santa doesn’t look like a skunk, but that image just stuck with me (and I couldn’t think of any other French characters) so I decided to name him Pepé. 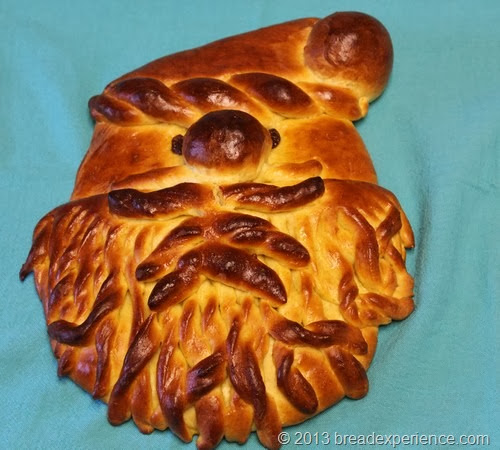 This Santa Bread is made from the Whimsical Santa on the Martha Stewart site.  I followed the recipe and instructions (or so I thought). They were really easy to follow.

However, I think I needed to let it proof on the counter a bit longer before adding the egg wash and baking it because my version is a little more whimsical than I had expected. 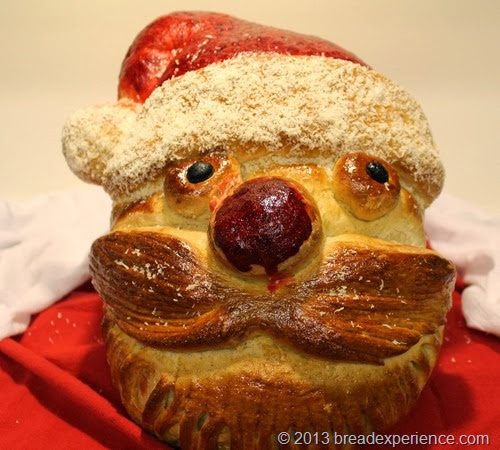 I loved the dough for this Santa. It was so easy to work with. It includes some rye flour which gives it a wonderful color. I don’t want to eat him, but I sure have been tempted because this bread actually looks good enough to eat.

Here are some photos of the process for making this bread.

I had fun and learned a lot about what not to do while making these breads. Hopefully, my photos and tips will save you some grief if you want to try your hand at making one of these Santa’s.  If you do decide to try it, please let me know how it goes.