Lardy Cake is an English tea bread made with a soft, enriched dough and filled with sugar, spices and dried fruit. It is also referred to as lardy bread, lardy Johns, and fourses cake, depending on the region. Lardy cake, according to a number of sources, originated from Wiltshire, in the south west region of the UK. Fourses cake and Lardy Johns are from Sussex. 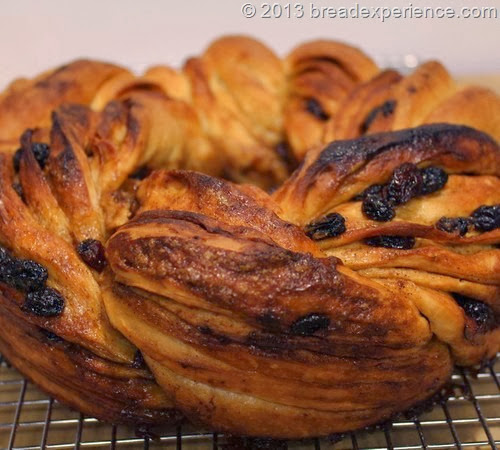 Lien (Notitie van Lien’s) chose Lardy Cake as the December bread for the Bread Baking Babes (BBBs) and Buddies. This tea bread is traditionally made with lard, but Lien found a more modern version made with butter.

The instructions were a bit perplexing so I did some research to make sure I understood how to fold and shape the dough. Lien’s description of caramelized sugar oozing out of the dough appealed to me, but I couldn’t quite get the picture of the folding. The perfectionist got the better of me so I went in search of more information.

As I was searching for the origins and instructions on how to make this bread, I happened upon Paul Hollywoods’s Lardy Cakes on the BBC. One version is made the traditional way using lard.  I really liked his instructions for incorporating the filling and folding the dough. I almost made that lardy cake (with butter not lard) until I saw his other version. This version is twisted to form a crown. The crown shape did it for me. 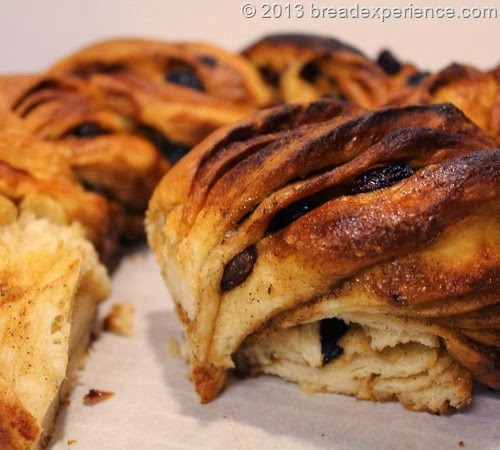 This Lardy Cake Crown is just lovely and would make a wonderful presentation for any table.  It tastes especially good with coffee or tea for breakfast or afternoon, or both.

Equipment: I used a tube pan to bake this bread. You can also use an 8-inch round springform pan. I recommend placing a baking sheet underneath the pan or lining it with parchment paper, otherwise the caramelized sugar oozes out the bottom. Ask me how I know.

I made this dough by hand, but you can use a stand mixer if you prefer.

1. Whisk together the dry dough ingredients in a large mixing bowl. Add the melted butter and warm milk and mix with a Danish dough whisk or a large wooden spoon until the ingredients are thoroughly incorporated.

2. Turn the dough out onto a lightly floured surface and knead until it is smooth and supple. Shape the dough into a ball and place it in a clean bowl. Cover the bowl with plastic and let it rise in a warm place until doubled in size. This could take anywhere from 2 – 4 hours depending on the temperature in your kitchen.

3. Turn out the dough onto a lightly floured surface and press it out flat with your fingers, then using a rolling pin, roll it out to a rectangle, about 20x8in.

4. Brush the softened butter over two thirds of the dough. Sprinkle the sugar over the butter, then cover the sugar with the raisins or dried fruit. Fold the uncovered section over to the center of the dough, then fold the other third on top.

5. Roll the dough out into a large rectangle.  Then roll the dough into a long log, starting at the long edge furthest away from you. Cut down the entire length of the log to form two long strips and reveal the fruit inside.

6. Hold the pieces at each end and twist tightly together, moving your hands in opposite directions. I didn’t quite get this part so I formed a 2-strand braid instead of twisting it.

8. Preheat the oven to 375 degrees F. and grease a tube pan or an 8in springform pan with butter. Place the tube pan or the springform pan on top of a rimmed baking sheet to keep all of the yummy caramelized sugar from leaking on the oven floor.  Trust me on this one.

Many thanks to Lien for choosing Lardy Cake for the BBBs and Buddies to bake this month. It’s a delightful bread and not really hard to make once you understand the instructions. I went shopping while it was proofing so the timing worked out great. 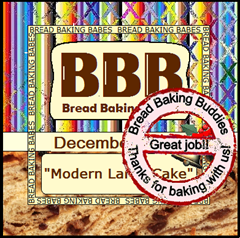 This loaf has also been Yeastspotted.