I’ve been working on this Gluten-Free Buckwheat-Quinoa Loaf all month. This is the fifth rendition, and I believe it’s finally ready for primetime. 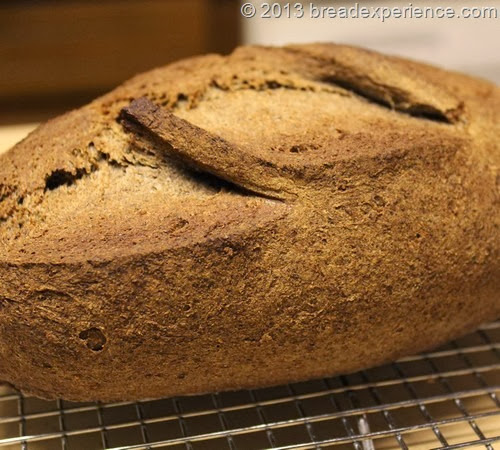 I have a relative who recently went gluten-free. She hosted Thanksgiving Dinner for our extended family last weekend. I worked all month to get this recipe down so I could bring her some gluten-free bread.

My relative is not wheat intolerant so I prepared the bread in my kitchen. However, I used separate bowls and utensils and instead of grinding the grains (for the final loaf) in the grain mill I use for wheat grains, I used store-bought buckwheat and quinoa flour.

I learned about this method for making gluten-free artisan Buckwheat bread in the November issue of Bread Magazine. I was so excited when I saw it because it actually looked like bread.

The first time I made it, I was not impressed. It tasted rather blah.  I thought maybe I had forgotten the salt.

Chris Stafferton, the creator of this bread, calls it honest gluten-free bread. I remember thinking, it may be honest, but isn’t it supposed to be edible too.

I decided to make a couple of changes to see if I could keep the bread honest, and give it a bit of flavor at the same time. Keeping in mind that I don’t know very much about making gluten-free breads. I made it several different times and each time was a little bit different. I’ve outlined each attempt below.

This version was made with buckwheat flour and an overnight sponge of buckwheat flour, water and a pinch of yeast. For this experiment, I used buckwheat flour that I had milled in my grain mill from hulled buckwheat. I wasn’t planning on giving this loaf to anyone so it didn’t matter if it came in contact with any wheat residue left in the mill.

I was so excited when I took the loaf out of the oven and saw the oven spring. I did a little jig and scared my dog. Charlie was helping in the kitchen but decided he was done after that and he asked to go out. This was before I tasted the loaf.

After the loaf cooled, I sliced it and tasted a bite. It looked and tasted like a sponge. It was time to go back to the baking board.

For the second attempt, I did things a little bit differently. Instead of making the sponge with buckwheat flour, I used quinoa flour. I incorporated the home-milled buckwheat flour again in the dough, but I added more salt and a little bit of honey. I also reduced the water a little bit. I was pleased with the results, but it had a bit of an aftertaste. I wanted to get rid of that, if possible, so I moved on to the next experiment.

Since the Buckwheat/Quinoa Loaf had an aftertaste, I went back to the source; the original recipe. I decided that part of the problem with the first attempt was my timing was off.

I paid close attention to the timing this time. I made the sponge and the final dough with home-milled buckwheat flour and added more salt and some honey like I did with the second loaf.  I also reduced the amount of water. It was definitely an improvement, but still not quite what I wanted.

For the next attempt, I used 50 percent buckwheat flour and 50 percent quinoa flour in the sponge and in the final dough. I incorporated the same amount of salt as in versions two and three, but this time I added agave nectar instead of honey. I also used less water. I forgot to take a photo of the crumb, but the texture was similar to the second loaf. I didn’t like this version very much so I let the birds have this loaf.

I was starting to wonder if I would ever get the right combination, but I decided to try again. This time, I incorporated less quinoa flour. The quinoa flour label indicated you could add up to 50 percent, but in my opinion that was too much – at least for this bread.

Using less quinoa flour helped to eliminate the bitter aftertaste (I think) and the flour milled from unhulled buckwheat added more flavor. I didn’t reduce the water because this buckwheat flour soaked up more water. However, I did increase the salt (as before) and added some honey. This version proved to be the winning combination. It had good flavor and nice oven spring.

Now I suppose you’d like to know how I made it, right?

Combine 150 g of warm water and a pinch (or 2) of instant yeast and let it rest for 10 minutes at room temperature.

Mix in the buckwheat and quinoa flours to form a wet paste. This mixture reminds me more of the texture of clay rather than a poolish. It also looks like clay. 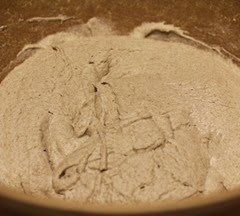 Cover the bowl with plastic wrap or a kitchen towel and allow it to ferment at room temperature for about eight hours.

The poolish seems to work better at a cooler room temperature (64 to 68 degrees F.) than I normally use for wheat bread (70 to 75 degrees F.)  It also performs better if you only let it ferment for about 10 hours max. The first time I made this bread, I let the poolish and the final dough ferment longer due to my schedule and the texture was more like a sponge than bread. 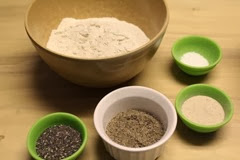 Mix the dry ingredients together gently with a wire whisk to ensure there are no clumps of milled seeds. 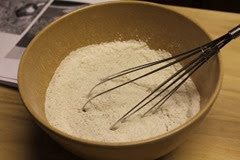 Add the remaining water to the poolish and the dry ingredients. Mix well using a wooden spoon or Danish dough whisk.  The dough will be stiff, but workable. You may not need all 195 g of the water. I held back about 50 g of the water initially and then added it in gradually.  For this final version, I used all of the water; however, on some of the previous attempts, I only used about 150 g of the water. 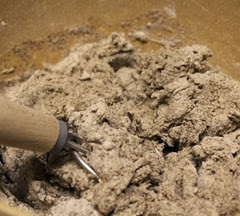 Cover the bowl with plastic wrap or a kitchen towel and let the dough rise for one hour in a warm place. I placed the dough in a proofing box at 75 degrees F. You can also place it in the oven with the light turned on. 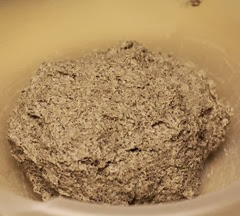 Remove the dough from the bowl and knead it for a few minutes. You may need a little extra flour for dusting.

I shaped the dough into a batard shape. It seemed to do really well in this shape.  To form the batard, flatten the dough out on the counter or board and form into a rough round. Bring the bottom of the round to the center and and gently press down using the outside edge of you hand. Fold the top of the round down and slightly overlap the bottom of the loaf. Gently pinch the seams together using the outside of your hand and your fingertips if necessary.

Place the loaf seamside down on a baking sheet or parchment paper sprinkled with buckwheat flour. This dough is pretty easy to work with so you can adjust the shape and make the ends more pointed if you like. 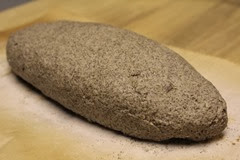 Cover the loaf and let it rise in a warm place, draft-free place for about 2 hours. I put the loaf in the proofing box at 75 degrees F.

Prepare the loaf for baking:

Preheat the oven to 450* degrees F. for 30 to 45 minutes with a baking stone on the bottom rack and a steam pan underneath or a cast iron skillet on the very top rack. You can also bake this loaf directly on a baking sheet if you prefer, but you will still need to bake it at a moderately high temperature.

* I baked this loaf at different temperatures and found that it did best when I preheated the oven to 450 and then reduced it to 425 degrees F. after spritzing it with water. You may need to experiment with the oven temperature to find what works best for you.

Score the top of the loaf before placing it in the oven.  This will allow the loaf to expand and minimize the tearing of the crust. I used a lame to score this loaf, but you can also use the tip of a sharp knife. 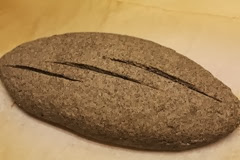 Slide the loaf (on the parchment paper) onto the baking stone.  Add 3 or 4 ice cubes to the cast iron skillet or steam pan, if using, and close the oven door. Open the door and spritz the oven walls with water. Immediately close the door. Repeat the spritzing a couple more times in 30-second intervals, then turn the oven down to 425 degrees F. Bake the loaf for 30 to 35 minutes or until browned and the loaf sounds hollow when thumped on the bottom. The internal temperature of the loaf should be 206 degrees F. when it is ready.

Cooling and slicing the loaf:

Remove the loaf from the oven and cool completely on a wire rack before slicing and serving. 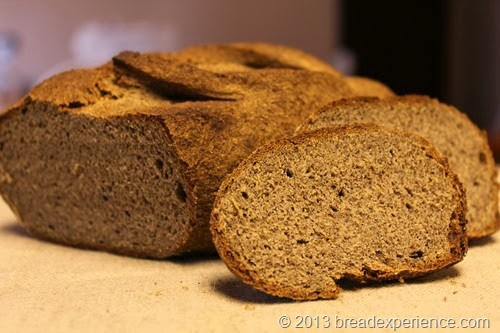 So after all that, I took this loaf to the family party, but no one wanted to try it. I should say none of the gluten-eaters would try it, except my oldest sister and she only took a bite.  Everyone else just looked at me like “Who me! I’m not going to try it, you eat it!”  Remember that commercial where they always say “Give it to Mikey he’ll eat it?” That’s about what happened.  Lol.

My gluten-free relative did try it. She said it reminded her of rye bread.  It’s a bit dense so I can see that.

This loaf isn’t a fluffy and light roll, but if you’re looking for honest and edible gluten-free bread, then this just might fit the bill.