Sing to me my bread & crackle sweetly in my ear

Every now and then you run across a gem. You know you’re onto something because it just resonates inside of you. It’s not something you can really explain, but you just know it when it happens. Well, it happened to me this past weekend. 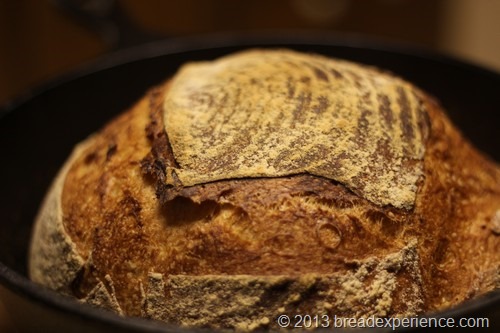 I didn’t go to the Asheville Bread Festival and I was really bummed, but I had been pushing myself too hard recently, and I just had to rest. Instead of fighting it like I normally do, I took a break from everything and spent time catching up with myself. It rained most of the weekend so it was a good time to just hibernate.

While I was sitting there trying to relax (which if anyone knows me, is a feat in and of itself), I picked up a bread book that I had gotten recently. The book is called Flour Water Salt Yeast: The Fundamentals of Artisan Bread and Pizza by Ken Forkish. Note: They are not paying me to say this and they did not send me a free copy of the book. I bought it myself, and I just love it. 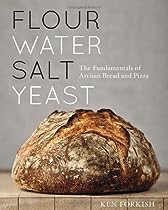 Mr. Forkish’s method is inspired by the processes of Jim Lahey (My Bread) and Chad Robertson (Tartine Bread). I think that’s one of the reasons I like this book so much. All of his formulas are based on 1000 grams of flour which makes it so easy to follow and adapt. In fact, he provides tips on how to adapt his recipes. Nothing is left to chance.

I was so inspired by the book that of course I had to bake some bread. I chose a bread that utilized an overnight poolish so it didn’t require much hands-on time the first day. I finished it Sunday afternoon and it totally lifted my spirits.

I fell in love with this bread the minute I took it out of the oven. I placed it on the wire rack to cool and as I was taking photos, it started to sing. It was a delightful melody. It crackled ever so lightly like a lover whispering in my ear.  I don’t know if I was just so spacey from exhaustion or what, but all I could think at the time was “I’m in love.” 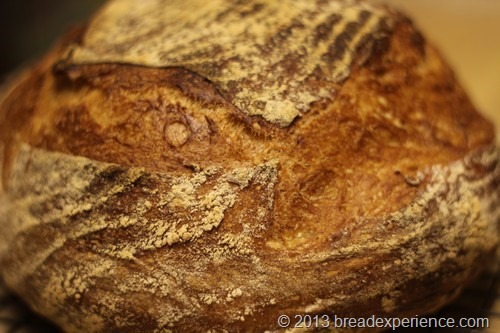 Adapted from: Flour Water Salt Yeast: The Fundamentals of Artisan Bread and Pizza by Ken Forkish

The night before you plan to bake the bread, whisk the flour and yeast together in a large bowl and add the 80 degrees F. water. Mix by hand or with a wooden spoon until it is thoroughly blended. Cover the bowl with plastic wrap and let it sit at room temperature (65 to 70 degrees F.) for 12 to 14 hours.  When the poolish is ready, it should be bubbly and almost tripled in volume. 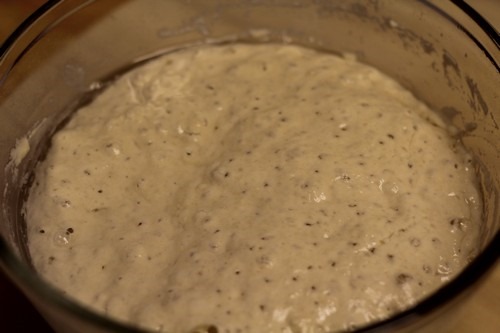 The next day, after the poolish is fully mature, whisk together the flour, salt and instant yeast in a large bowl.  Pour the water (105 degrees F.) around the edges of the poolish to loosen it from the bowl. Then using a wooden spoon, pour the water/poolish mixture into the flour mixture. 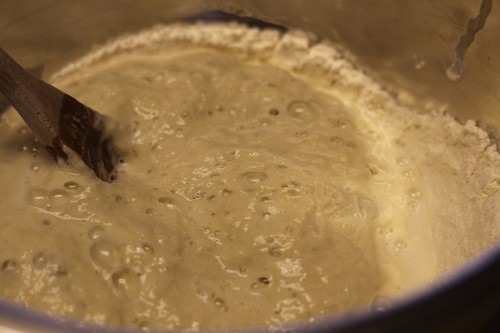 For the next part, you’ll need to get your hands wet. Using wet hands, mix the dough by folding it to thoroughly incorporate all of the ingredients (refer to my post on making Tartine Country Bread) The dough should be around 74 - 75 degrees F. 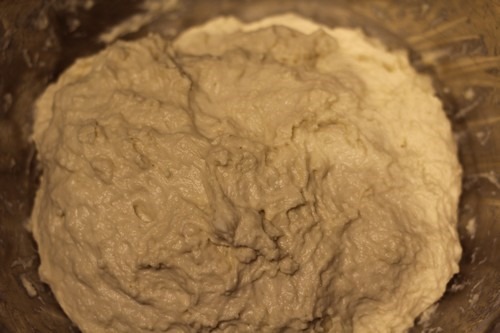 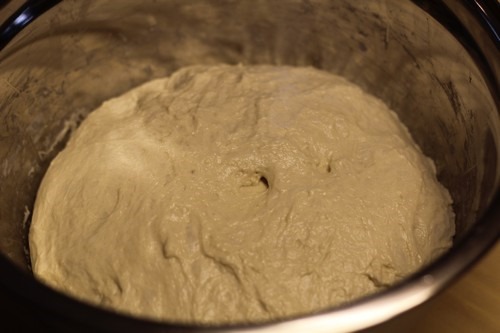 Mr. Forkish has a slightly different process because he bakes his loaf in a Dutch oven and he shaped his loaves into a fendue shape. I shaped my loaf differently and baked it in my combo baker so this is the process I used.  If you choose to use a different baker, you might need to adjust the shaping/scoring part so you don’t burn yourself when inverting the dough into the pot.

I only made one loaf so I didn’t need to divide the dough. I removed the dough to a lightly floured surface. 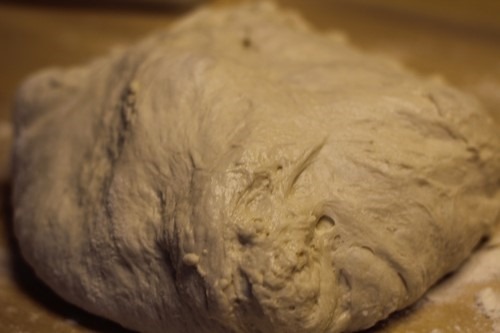 Then I shaped it into a medium-tight ball and placed it seam-side up in a floured banneton basket. 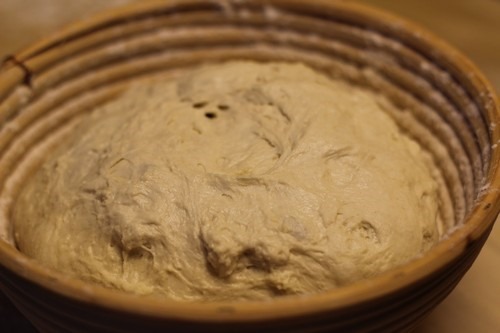 I lightly floured the top of the loaf and covered it with a kitchen towel.  Then I let the loaf proof in the basket for an hour.  Use the finger-dent test to know when the dough is fully-proofed and ready to bake. This just means you press your index finger lightly into the dough and if the indention remains, the dough is ready. 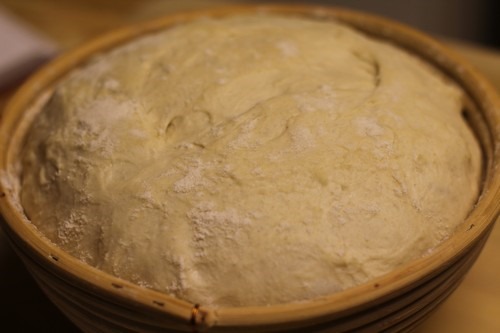 6) Prepare the oven for Hearth baking

While the loaf is proofing, at least 45 minutes before it’s time to bake, preheat the oven to 475 degrees F. with the combo baker or Dutch oven or other bread baker on the bottom rack.  There’s no need to place a steam pan underneath because the covered pot will provide it’s on steam.

For this part, be very careful that you don’t burn yourself because you’ll be working with a very hot pan. Keep your fingers, forearms and anything else away from the hot pot. I large heat-resistant oven mitt works great for this.

Carefully remove the preheated combo baker (using gloves) and invert the proofed loaf onto the bottom of the baker.  My loaf didn’t plop exactly centered in the pan so I shook the pot a little bit to even it out but it was still a bit uneven. 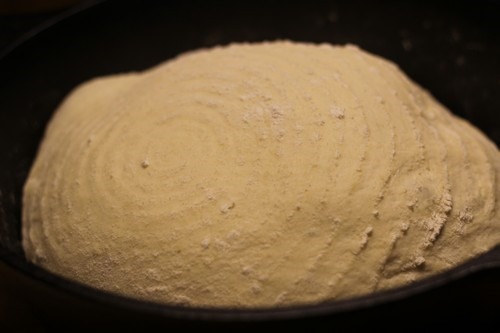 Then I carefully scored the loaf using a lame.  Even though the rings of flour were a bit off in the pan, I thought the scoring turned out pretty well. 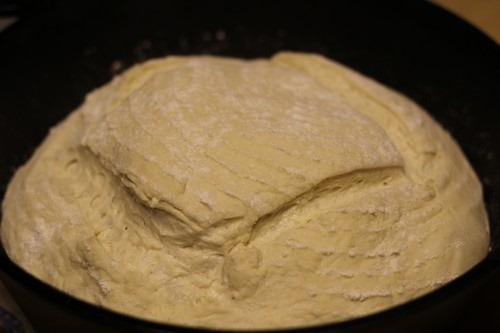 Cover the combo baker with the lid and place it on the bottom rack to bake. Bake the loaf for 30 minutes, then uncover the baker and bake the loaf for an additional 20 to 30 minutes. This is what the loaf looked like when I removed the lid. 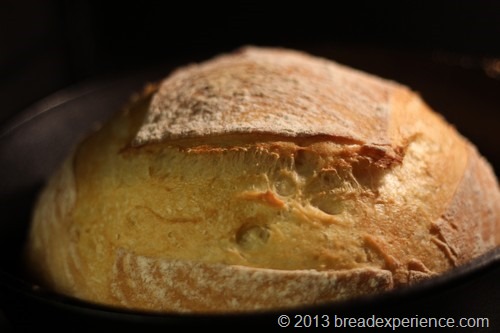 The finished loaf should be at least medium dark brown all around the loaf. This has always been the hard part for me because I don’t like to burn my bread, but I was a good girl and left the loaf in for the suggested amount of time. However, if your oven is hot like mine, you might want to check the loaf sooner.

Carefully remove the combo baker from the oven and gently tilt it to remove the loaf. I just reached in using my oven mitt and lifted it out. Place the loaf on a wire rack and let the loaf rest for at least 20 minutes before slicing. 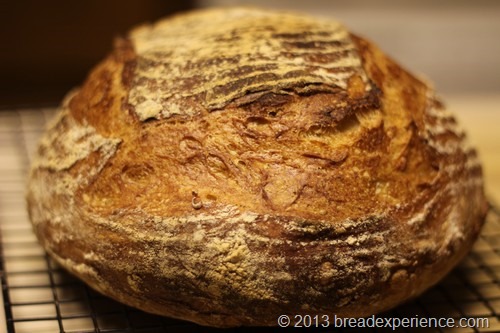 After I let the loaf cool, I just couldn’t bring myself to slice it just yet. I wanted to look at it a bit longer. It’s very photogenic don’t you think?  I placed the cooled loaf in a paper grocery bag and let it sit overnight. 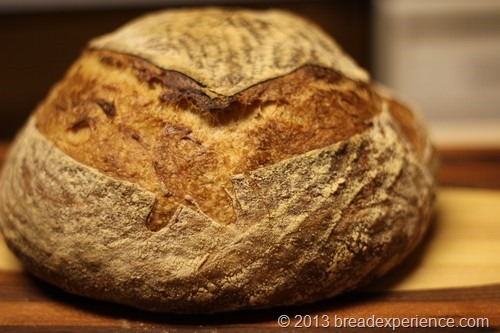 The next day, I sliced the loaf and sampled it.  I was not disappointed.  It tastes great with butter or dipped in oil and particularly good toasted with sharp cheddar cheese. It also makes a great sandwich bread.  I’ve been enjoying it all week. 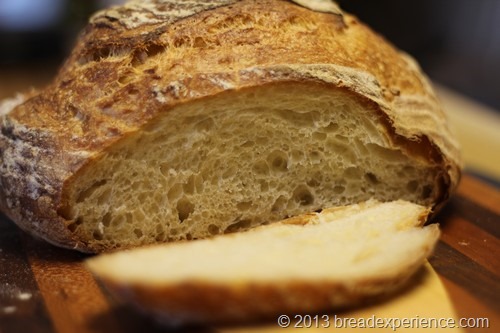 And so, my love affair with bread begins anew with this White Bread with Poolish.

I hope you enjoy this bread as much as I did.

This bread has been YeastSpotted in the weekly bread roundup hosted by Susan of Wild Yeast.