I wanted to use my apple starter in a special bread recipe, but the starter had been sitting in the refrigerator since the beginning of November. It hadn’t been fed so it was rather acidic.

Normally, when I feed my Apple Starter, I pour off part of the hooch (the liquid stuff at the top), stir it down, and discard all but 250 grams. Then I feed it with 125 grams of flour and 125 grams of water and let it rest on the counter for a few hours until it’s active and bubbly and ready to go.

However, as I mentioned, it had been about two and a half months since I had fed the starter so I opted not to go with the normal feeding process. I chose to activate the culture using a different method that reduces the acidity level and ensures the culture is fully activated before using it in bread dough.

This post focuses on how to activate a sourdough culture (also known as a starter).  The next post will feature bread made with the activated culture.

This is what the starter looked like when I took it out of the refrigerator and before I began this process. 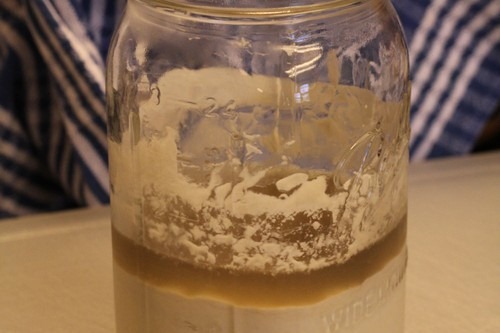 I’ve mentioned this method in a couple of my previous posts, but I had such fun with this experiment that I decided to present the process in a little more detail.

This method for activating a sourdough culture, as outlined in the book Classic Sourdoughs by Ed Wood and Jean Wood, works particularly well if the starter has been in the refrigerator for awhile without being fed.

I began by stirring the starter and the hooch, then I filled the jar completely with warm water and stirred until it was thoroughly mixed. 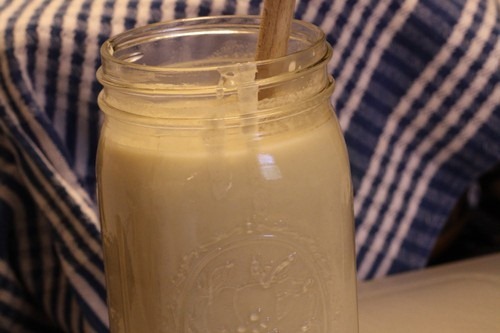 You’re supposed to leave a little more than 1 cup in the jar (240 ml) and discard the rest. This is the part I always have trouble with (because I hate to waste things) so instead of discarding it, I put another cup of starter in a different jar. Now, I had two jars instead of one. If you’re going to make more than one loaf, having an additional jar of starter is actually a good thing. I only took a photo of one jar, but you get the gist. 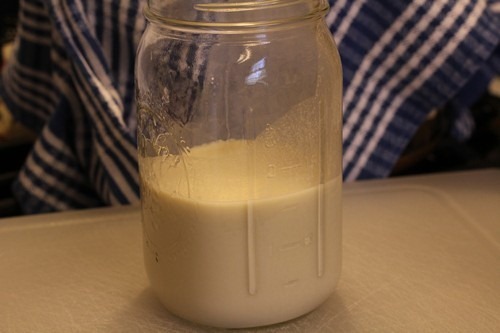 Next, I added 125 grams of all-purpose flour to the culture in each jar to make it the consistency of thick pancake batter. The instructions in the book call for less flour, but I found that after I filled the jars with warm water, the starter was really liquid. So I added more flour, but no additional water. If your starter is not as liquid, you might need to add up to 1/2 cup of water to return it to the consistency of thick pancake-like batter. 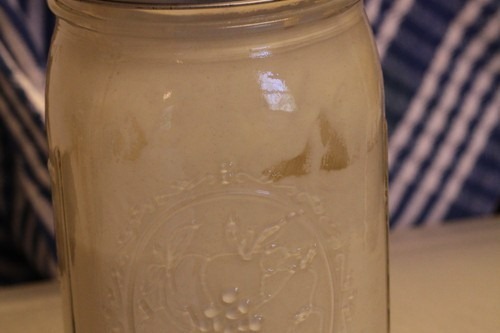 At this point, I had two jars that were each a little over half full. I put them in my proofing box and proofed them for 4 hours at 73 degrees F. I chose that temperature because it was in the middle of the recommended range of 70 to 75 degrees F.

At the 4-hour mark, the volume in the jars had increased and it was fully active and ready to use in the next step. I forgot to take a photo of the fully active starter in the jars. I was ready to move on.

The next step is to create a culture proof using the fully active culture. The reason you do this is to prepare the culture for use in the sourdough bread and to optimize the flavor and leavening abilities.

To create the culture proof, you start with a fully active culture (Step 1 above), then you stir it vigorously again and divide it in half. You’ll have two jars of culture at this point. Of course, I had 4 jars since I doubled the initial step. 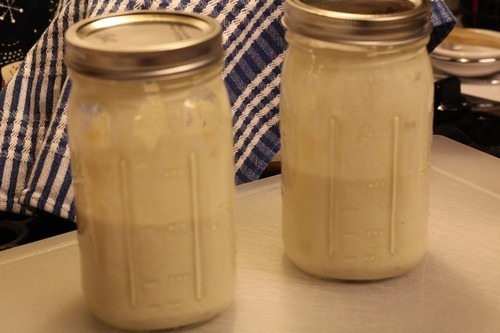 After the culture has proofed for 8 to 12 hours, it is ready to be used in bread.

The next post features a Buttery and Cheesy Sourdough Surprise made with this culture.  I also have something special planned for the other jars of sourdough. So stay tuned…