The theme for Bread Baking Day #39 is Salt-Rising Bread.  Salt-rising bread is an old-fashioned artisan bread with a cheesy flavor and dense crumb. 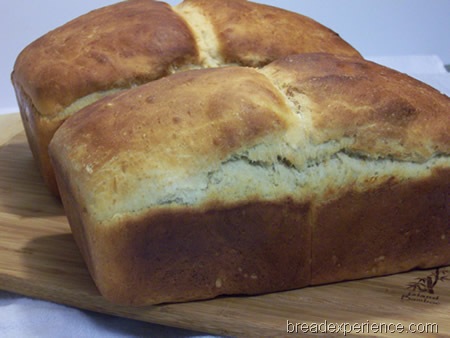 “Salt Rising Bread, is a dense, white bread that develops its delicious cheesy flavor from a unique fermentation process.  It is thought to have first been made by pioneer women in the early 1800s in the United States.  As commercial yeast was not available prior to the 1860’s, bread-makers would alternatively create a mixture of either cornmeal or potatoes to make their own rising agent.  It is believed that pioneer women then set their “starter” in a bed of heated rock salt, which often was kept in a salt box next to the hearth fire (thus the name “Salt Rising”) to maintain the required warmth.  In the morning, they would use this liquid, known as  a “raisin” to leaven their bread dough.”  Source: http://www.risingcreekbakery.com/SRB.html

Susan Brown and Jenny Bardwell of Rising Creek Bakery in Pennsylvania showcased their salt-rising breads at the Asheville Artisan Bread Baking Festival.  I was intrigued by this method so I bought one of their loaves and added it to my list to bake soon.

Well, wouldn’t you know it, but Alisa of Easier Than Pie, the host of this month’s bread baking day, chose salt-rising bread as the bread of the month. This gave me the perfect opportunity to try out this method and to introduce you to Susan and Jenny of Rising Creek Bakery.

Susan is also involved with a Salt Rising Bread Project. You can view her findings as well as stories about the history of the bread and original recipes here.

Time from start to finish: About 12 hours

This bread is from a Master’s Thesis completed at Cornell University by Delene Clark Holbrook in 1961.

Susan has several authentic salt-rising bread recipes on her site. I chose Salt Rising Bread Recipe #6 because it uses the least amount of ingredients and only makes a couple of loaves. Of course, if I had known how much I would like it, I would’ve made more because this bread freezes well. 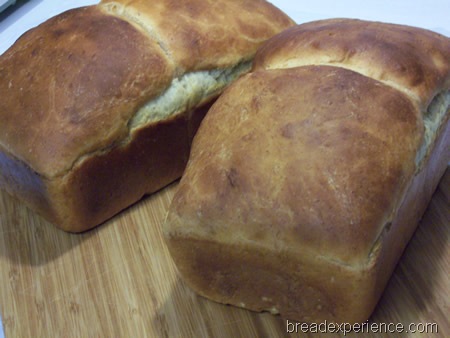 Mix the whole wheat flour and nonfat milk solids in the gallon jar (or container). 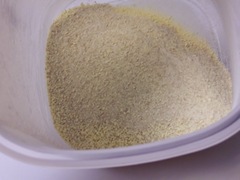 Add the water at 140 degrees F to the contents of the jar and mix to moisten all the dry ingredients. 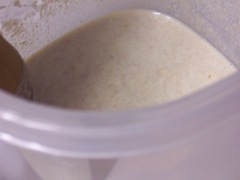 Cover the jar with the lid and place away from drafts and 1 inch from a lighted 200-watt bulb. I put the lid on my container and place it in the oven close to the light bulb.  Then I turned the light on and closed the oven door. 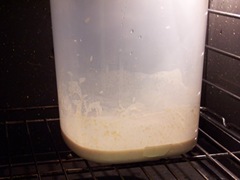 Let stand for 6 1/2 hours.  Temperature of the batter should be about 113 degrees F.  At this point, I deviated from the recipe a little bit.  I started the process Saturday morning at 9:30 am, but I had to go out of town for the day so I left the batter until 8:30 pm when I got home. So my batter rested in the container for 11 hours instead of 6 1/2. 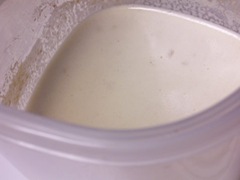 Add water at 113 degrees F and bread flour to the batter.  Mix only enough to barely moisten the flour. 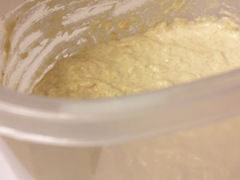 Mark the height of the sponge on the jar with a wax pencil. I used masking tape to mark it. It was about 8:30 pm at this point. 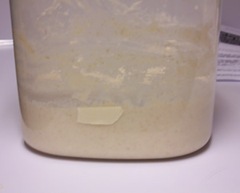 Place the container back in the oven with the light on. After 1 hour check the sponge and again mark its height on the jar.  I waited about an hour and a half (until 10:10pm) before I checked the dough.  It had risen a good bit. 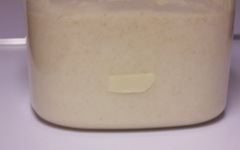 Remark every 15 minutes or more often if the sponge has risen considerably. I remarked it the first time at 10:10 pm. 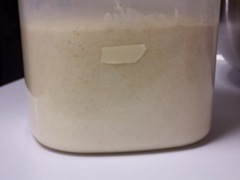 Then I remarked the top the 3rd time. 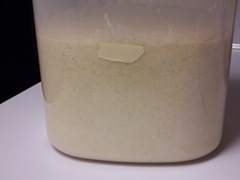 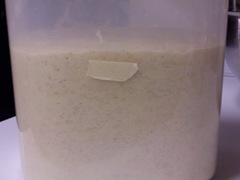 I remarked the top the 4th time and checked it again at 11:05pm. 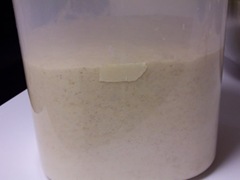 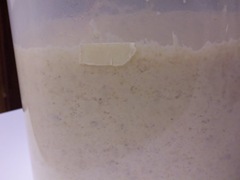 At this point, the sponge had a very strong cheesy smell.  It was almost too strong to bear. 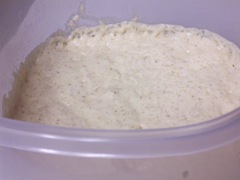 Dough stage, from 1 to 3 hours 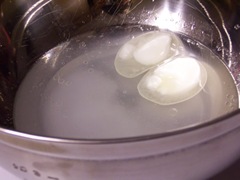 Add the sponge and mix slowly until all ingredients are moistened. 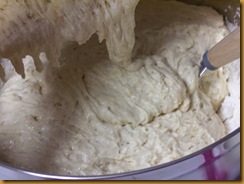 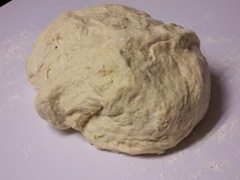 Place dough on a floured board (or surface) and divide it into 4 equal portions. 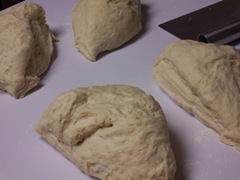 Add more flour if the dough is too soft to shape.  Shape immediately and place 2 portions together, lengthwise, in each oiled baking pan.  I shaped the portions into balls and placed the balls in the pans that way rather than shaping the portions lengthwise.  The Artisan Bread Bakers shaped the  simple milk bread this way and I liked that method because it was really easy. 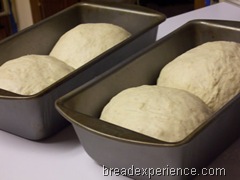 Lightly oil the top of the shaped dough and cover the pan tightly with clear plastic wrap. 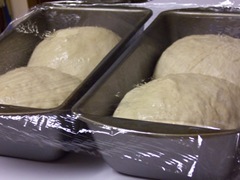 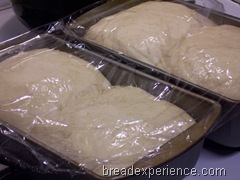 Remove plastic wrap and bake at 400 degrees F for 35 minutes. 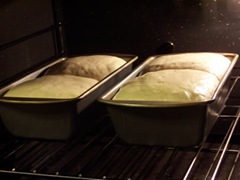 I baked the loaves for 30 minutes, then tested for doneness with a long wooden skewer.  It came out a little bit gummy so I let the bread bake about 5 more minutes until it was completely done. 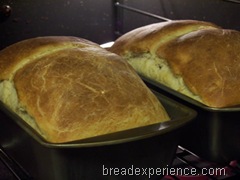 To prevent sogginess, remove loaf from pan immediately after baking and allow to cool. 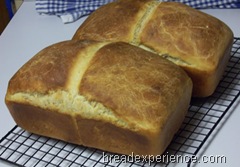 To forestall drying out, keep the loaf in an airtight container (or use a bread bag), where it will stay moist several days without molding 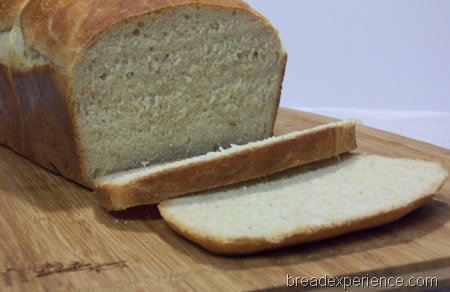 This bread is not heavy nor does it taste sour. So despite taking some liberties with the timing, it still tuned out good. My boyfriend and I actually liked this version better than the first loaf we tried because it’s not so cheesy-tasting.  The first loaf we tried reminded me of sourdough but it was a bit too sour.  This one isn’t sour, it’s really good.

Thanks to Alisa of Easier Than Pie for hosting Bread Baking Day #39 and challenging us with the salt-rising method of bread baking.  I thoroughly enjoyed making this bread.  It tastes good too!