A few months ago, my oldest son’s girlfriend posted a photo of Panda Bread on Facebook and asked me if I could make it for her. I thought it was adorable so I decided to take up the challenge. I did some research and found the recipe on Perfect Pandas.  The original recipe was from an Asian web site called Taro Taro. It had been translated by wlteef.blogspot.com.  The version on Perfect Pandas had been modified for use in a bread machine. I followed their version of the recipe for the most part. 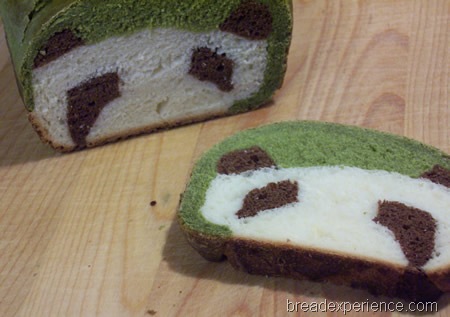 This is the second time I’ve made this bread.  I made it the first time over the Holidays. I didn’t have the right kind of green tea at that time so I wasn’t very pleased with the resulting color or shape of the bread. So, I ordered some green tea powder and decided to try again. This time, I made it for Valentine’s Day. I was fairly pleased with the results this go round so I decided to post about it.

Here is the step-by-step process I followed to make this Panda Bread:

Heat up milk and yolk to temperature of 38C. (I beat the yolk lightly with milk and sent it to the microwave on HIGH for 40 seconds or so). 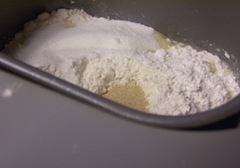 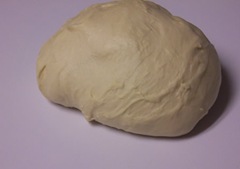 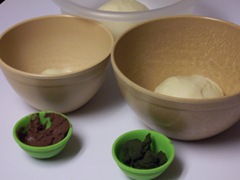 Add chocolate to the 75g dough and knead till the color is even. (I began this process using an electric mixer, but the dough ball was a little too small for the mixer to incorporate thoroughly so I finished working the chocolate into the dough with my fingers). 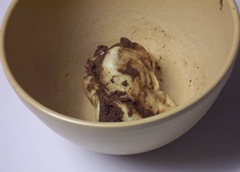 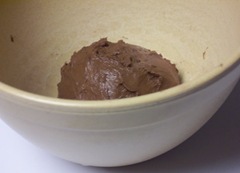 Add green tea mixture to the 280g dough and knead till color is even. I was able to use the mixer to incorporate most of the green color, but I still had to do the last bit with my fingers. It was a bit messy but fun. 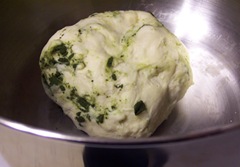 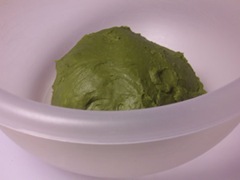 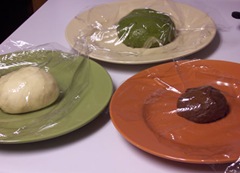 Punch air out of dough and prove for another 20 – 30 minutes. 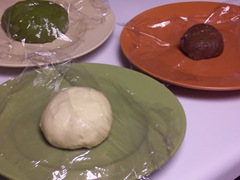 Use 90g plain dough for the face and 2 pieces of 27g chocolate dough for the eyes. (I referred to photo guide in Step (7) on TARO’s site for the shaping). 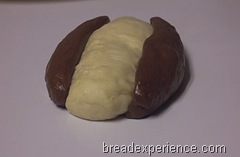 Fill the hollow of the eyes with 30g plain dough. (Refer to photo guide in Step (8) on TARO’s site). 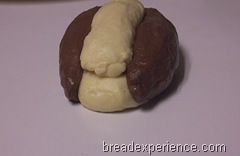 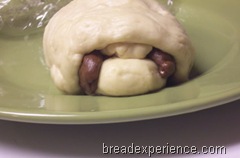 Divide the remaining chocolate dough into 2 pieces (17.5g each) for the ears. (Refer to photo guide in Step (10) in TARO’s site). 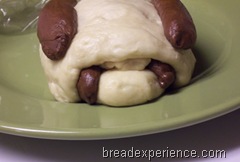 Use 70g of the green tea dough to fill up the hollow between the ears. (Refer to photo guide in Step (11) in TARO’s site). 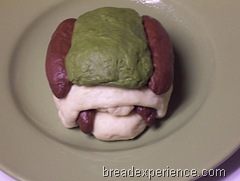 Wrap the rest of the green tea dough all around the patterned dough. (Refer to photo guide in Step (12) in TARO’s site)

Place dough into a well-greased loaf pan and cover it with a lid and prove for 50 – 60 minutes in an enclosed area. I put it in my oven with the light on. I didn’t have a small pan with a lid on it so I just covered it with plastic.  I used an 8 1/2” x 4 1/2” loaf pan and it was a bit too small.  I believe a 9” x 5” loaf pan would’ve worked better because the dough didn’t have enough room to rise in the pan while proofing so it rose unevenly when baked. 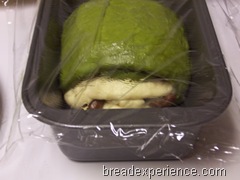 When I first took the bread out of the oven, I was disappointed. As you can see, it cracked at the top. 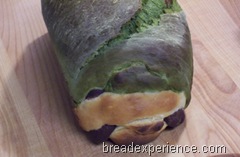 However, once I cut into the bread, I realized the slices looked fine.  Even though the outside doesn’t look perfect, it’s what’s on the inside that counts, right?  Isn’t it cute (even with the lopsided eyes)! 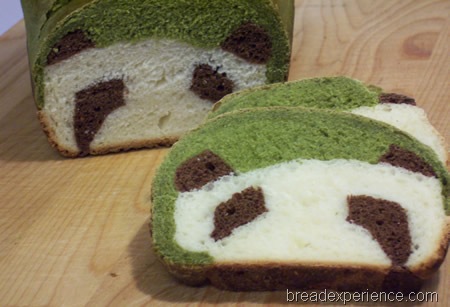 The original instructions didn’t provide much guidance regarding how long the dough pieces should be rolled out, it only gave the weight.  I think it will help to roll the dough pieces out a little bit longer. I also think baking it in a larger loaf pan will help with the cracking issue.  I’m not sure there is enough dough, but if there was, I think this bread would look really cool baked in a Pullman pan. I may try it sometime.

All said, I had fun making this bread. So I’m sending it to be YeastSpotted. Please visit Wild Yeast to view all of the lovely breads in the roundup.