For this month's tigress can jam, our choices were rhubarb or asparagus.  I'll be honest, neither one of these options appealed to me. However, rhubarb seemed to be the lesser of two evils, so I opted to try my hand at making Rhubarb Jam.

Well, little did I know it but it's next to impossible to find rhubarb here in May.  I went to three Farmer's Markets and several grocery stores looking for it.  I even posted about it on Facebook to see if anyone knew of a place that had it.  Basically what I found out is if I want to get fresh rhubarb, I need to look for it in April not May.

So, I toyed with the idea of making some pickled asparagus.  I found asparagus in a couple of stores, but I just couldn't bring myself to buy it. I had asked several of my friends and family if they would try it if I made it, but I didn't get any takers.  The recipe I found made a bunch so I didn't want to get stuck with 6 to 8 jars of pickled asparagus.  I know the idea behind this challenge is to challenge yourself, but I couldn't bring myself to make 6 jars of something I knew wouldn't get eaten and I couldn't even give it away.

So, instead of skipping this month's challenge, I opted for the next best thing ...

I got some frozen Rhubarb. Several friends on Facebook mentioned that they had used frozen Rhubarb and it had worked really well so I decided to go that route.

I know what you're thinking, "frozen rhubarb is not local!"  Well guess what!  Neither was the asparagus. I checked. So there!  :)


After all of that running around, it was finally time to make the jam and guess what?   I like it! 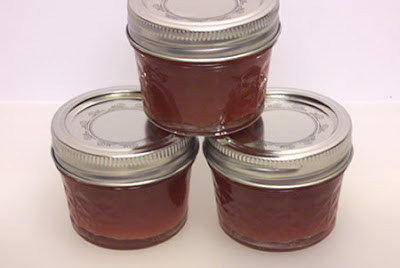 So here's how you make it.

It's really easy, particularly when you use frozen rhubarb.

The recipe is from The Joy of Jams, Jellies, and Other Sweet Preserves by Linda Ziedrich and is based on an old Pennsylvania Dutch one.

2 1/2 pounds rhubarb stalks, cut into 3/8-inch pieces.  I used a couple of bags of frozen rhubarb.  It was already cut into 1-inch pieces.  I let it thaw a bit, then cut the pieces in thirds.

In a large nonreactive pot, combine the rhubarb, water, and orange zest. 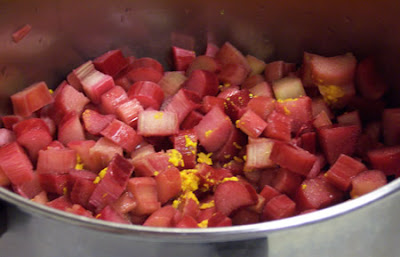 Cover the pan and simmer the contents for about 20 minutes, until the rhubarb is tender. 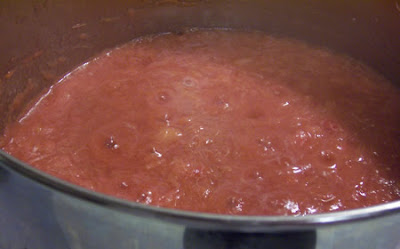 Remove the pan from the heat and add the orange juice and sugar. Over medium heat, stir the contents until the sugar is dissolved. 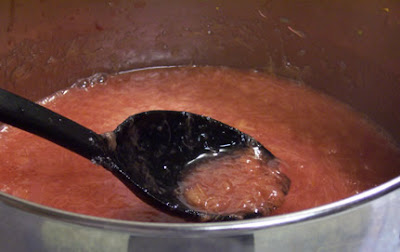 Raise the heat to medium-high and boil the jam until it mounds in a chilled dish. 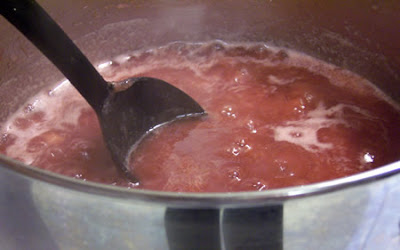 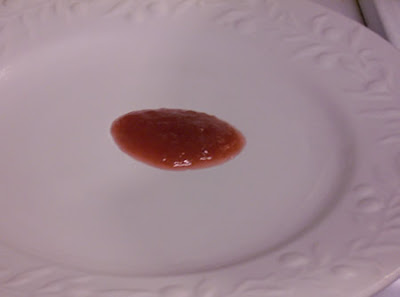 Ladle the jam into pint or half-pint mason jars and add the lids and rings. Then process the jars for 10 minutes in a boiling-water bath. If you live in a higher altitude or need more detailed instructions on water-bath canning, please refer to the instructions at the National Center for Home Preservation.

Remove the jars from the canner and let them sit on the counter overnight. 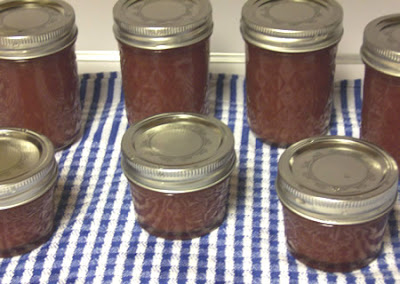 Even though the jam mounded on the chilled plate, I wasn't sure if it was going to gel.  It took a couple of days, but it finally did set.

I used some 8 oz and some 4oz jars so I'll have enough to give away to friendsand family.  I don't think I'll have any problems with this one.  My son even said he liked rhubarb.  Fancy that! 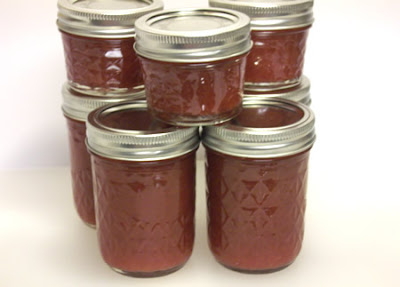 We're making jams or pickling every month in 2010. For more info, go to tigress can jam.  Be sure to check out the May Can Jam Roundup.


Here are some of the references I use in my canning adventures. You might enjoy them as well: