Zucchinis, zucchinis everywhere. The two plants in my community garden plot have been producing more zucchini than I can shake a stick at. However, the ones in my raised bed garden at home haven’t produced anything. That’s the way it works with gardening. I divided up my plants between the two gardens in hopes I would get some bounty from at least one if not both of them. So far, it’s worked pretty well this season.

Since I’ve had a surplus of zucchinis, I’ve made a bunch of zucchini bread, but one can only make and give away so much at a time so I’ve been trying to come up with other ways to use the squash.

I had soup on my mind the other day and decided this would be a good way to use some of them. I didn’t want a cold soup even though that’s what you usually think about for summer soups. I wanted a warm and creamy comfort food-type soup that melts in your mouth and soothes your soul. 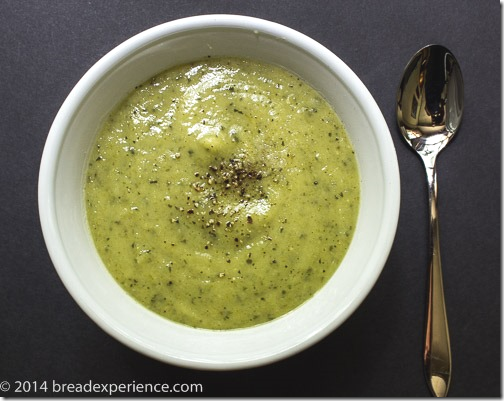 I ran across several zucchini soup recipes as I was thumbing through my recipe books, but none of them were exactly what I was looking for.  So I decided to make my own. I took what I liked from each recipe and used the ingredients I had on hand to create this smooth and creamy curried zucchini soup. It was just what I needed for a lazy Sunday afternoon meal.

Instead of using sour cream or another type cream to thicken the soup, I used a classic method, called beurre manié.  It’s made with equal parts butter and flour. I loved the rich, buttery flavor it imparted to the creamy soup.

This soup tasted so good I made it again and doubled the recipe to use up the rest of my zucchini.

Adapted from: Soup: An inspiring collection of soups, broths, and chowders by Love Food and Soups by Marguerite Patten

Melt the butter in a saucepan over medium heat. Add the onion and cook until it begins to soften, about 3 minutes.

Add in the zucchini, chicken or vegetable broth, and curry powder and a pinch or two of salt, if you are using unsalted broth.  Bring the soup to a bowl, then reduce the heat and cover. Let it cook gently for 20 to 25 minutes, or until the vegetables are tender.

Let the soup cool slightly, then transfer in batches to the blender or food processor. Process just until the soup is smooth. It should still have some green flecks from the unpeeled zucchini. If you’re using a food processor, strain off some of the liquid, then reserve it. Just process the soup solids (cooked vegetables) with enough liquid to moisten them, then mix it with the remaining liquid.  If you’re using a blender, process the soup solids and the liquid together.

Return the pureed soup to a clean (rinsed out) saucepan and reheat gently over low heat until hot. Do not let it boil.

In the meantime, make the beurre manié by mixing the butter and flour together in a pan and cooking on low heat until it is thoroughly incorporated.

Make sure the soup is hot, then drop small amounts – about the size of a large pea – into the soup. Wait until it is completely absorbed into the soup before you add anymore. Continue adding it until the soup is the consistency you want. You may not need all of the beurre manié. If you have any left over, store it in a covered container in the refrigerator until you’re ready to use.

Try the soup and adjust the seasoning, if desired.  Then ladle it into soup bowls and enjoy.  I added some cracked black pepper as a garnish.