When I tasted some gluten-free Sprouted Sorghum Crackers at the Asheville Bread Festival, I wasn’t expecting to actually enjoy them.  I was pleasantly surprised. I took a bite and exclaimed “Oh! these are good!”

The sample test worked. I bought some of the sprouted sorghum flour to make crackers myself. I also bought some other sprouted flours to test.

I’ve had the flour sitting on my counter for the past couple of weeks just waiting for the right opportunity to bake these crackers. 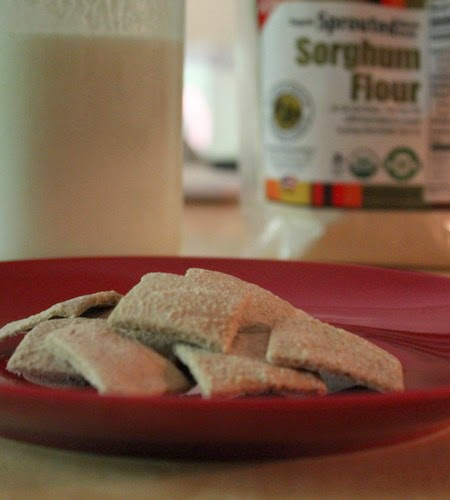 As it happens, the challenge for Bread Baking Day (BBD #67), hosted by Kathys Kuechenkampf was to make Brot für Allergiker or Bread for Allergic Persons.

The criteria for the challenge was to:

Bake a bread with less histamine WITHOUT:
- wheat, durum wheat, buckwheat
- barm or leaven
- any kind of nuts and seeds

Or bake a bread without gluten WITHOUT:
- wheat, spelt, rye, kamut, emmer, einkorn and durum wheat
- oats and barley are okay, but it's better to use teff, millet, corn, rice, quinoa, amaranth or buckwheat

I thought about making crackers with buckwheat, but I really wanted to try my hand at making the sorghum crackers.  So the buckwheat will have to wait.

Sorghum is gluten-free and since this particular flour was sprouted before it was ground into flour, it has lots of vitamins and nutrients that you won’t find in unsprouted flour.  Plus, sprouting makes it easier to digest.

To Your Health Sprouted Flour Co., the company that makes this sprouted flour, has returned to the traditional practice of sprouting grains in order to render them more nutritious and digestible. They nurture the grains in their facility, allow them to sprout, then dry them at a very low temperature, to maintain precious vitamins, minerals, and enzymes.

Note: This is not a sponsored post.  I bought the flour myself. I just wanted to share my experience with you. 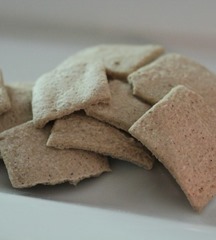 Keep in mind that although these crackers are gluten-free, they do include dairy and leavening in the form of non-aluminum baking powder. They also include organic butter.

The crackers call for buttermilk. I didn’t have any buttermilk and I’ve been on a kefir kick lately so I used kefir milk instead. That’s kefir in the jar in the background of the photo above.  I’ve been feeding and taking care of it like I do my sourdough pets.

Adapted from: TYH’s Sprouted Crackers by To Your Health Sprouted Flour Co.

Place the flour and milk in a large bowl and mix with a Danish dough whisk or wooden spoon until a stiff dough forms. Add the melted butter, baking powder, and salt. Mix well.

Divide the dough in half and roll out each half to about 1/8 inch thickness on a piece parchment paper sprinkled with flour. My dough was a bit sticky so I found it helped to put water on the rolling pin before I rolled out the dough. This helped keep the dough from sticking to the rolling pin. I tried sprinkling flour over the top of the dough, but the water worked better for me.

Using a pizza wheel, cut the crackers into squares (on the parchment paper).

Slide a baking sheet under the crackers on the parchment paper and place the baking sheet in the oven. Set the oven on the lowest possible setting (around 150-200 degrees). The lowest temperature setting on my oven is 170 degrees. If your oven only goes down to 200 degrees, prop the door open slightly and let the crackers dry overnight.

Leave the crackers in the oven until they are completely dried (several hours). Mine were done in about an hour and a half to two hours. They will be crispy and delicious. Trust me.