The idea for this potato pizza was birthed in Edinburgh, Scotland. My son and I stayed there a couple of days while traveling across the UK. 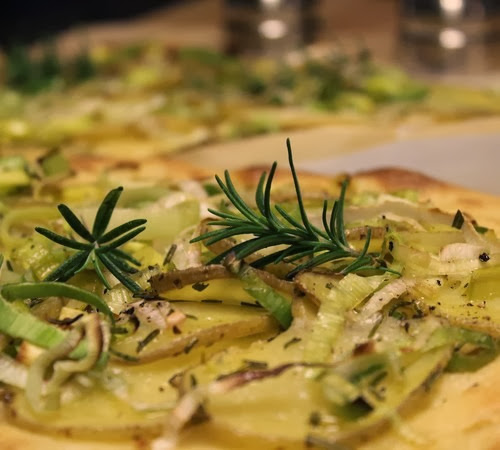 It was cold and rainy one day while we were walking about so we went in a diner to get warm and enjoy a hot meal. I had the most delicious potato and leek soup.

A couple of days before, when we were riding the train to Edinburgh, I saw an article about a pizza made with fennel. I don’t remember the other toppings, but when I tasted the potato and leek soup, I envisioned a potato, leek and fennel pizza. 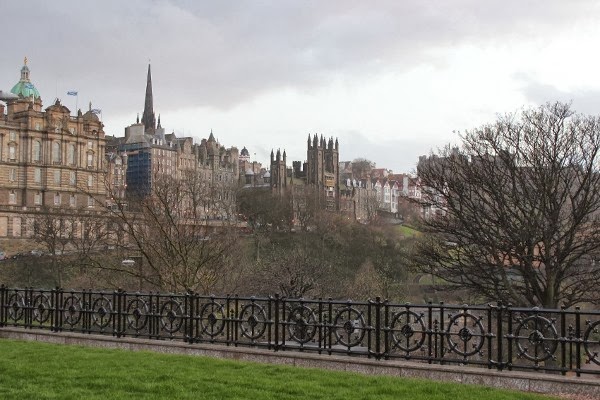 That combination had been swirling around in my head for months, but when I got ready to make the pizza, I did some research and found Potato Rustica, which is made with rosemary. My potato, leek and fennel pizza transformed into a potato, leek and rosemary pizza mainly because I have fresh rosemary growing in my herb garden.

I used most of the toppings from Potato Rustica, but my version is not made with the typical Potato Rustica dough. My potato pizza dough is made with spelt and semolina which gives it a really crispy texture, almost like a cracker.

I used these sources as my inspiration for the toppings:

Makes: Five 8 ounce pizza balls (I only used 2 pizza balls for this recipe so I froze the other balls)

Combine all the ingredients in the bowl and mix for one minute, using a Danish dough whisk, wooden spoon, or an electric mixer with the paddle (not the dough hook) to form a coarse, sticky dough ball.

Let the dough rest for five minutes, then mix again for one minute to make a smooth, very tacky ball of dough.

Transfer the dough to a lightly oiled work surface, rub a little oil on your hands, and fold the dough into a smooth ball. Place it in a lightly oiled bowl, cover with plastic wrap, and immediately place in the refrigerator. The dough can be used anywhere from 6 hours to three days after it goes in the fridge. 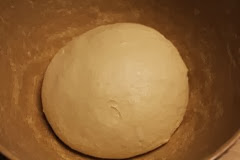 Take the dough out of the refrigerator two hours prior to when you plan to bake the pizzas. Divide the dough into five equal pieces.

Form each piece into a tight dough ball and place on a lightly oiled pan. Mist the dough balls with spray oil and cover loosely with plastic wrap, or place the pan inside a large plastic bag.

Note: Give the dough balls at least 90 minutes to warm up at room temperature before making the pizza.

I left the peel on my potatoes, but you can peel them if you like.  Then slice them very thinly. I used a sharp knife, but you’ll probably want to use a mandolin if you have one. The thinner you slice them, the better so they cook at the same time as the crust.

Transfer the slices to a large bowl of ice water as you slice them. Soak the potato slices for 30 minutes to remove excess starch, then drain in a colander. Repeat soaking and draining process 2 more times. Place the colander over a large bowl. Toss potatoes with 1/2 tsp. salt and set aside to let drain for 10 minutes.

Transfer potatoes to a medium bowl. Add onions and 1 tbsp. of the oil, toss well, and set aside. I added the rosemary at this point, but you can wait until you top the pizza if you prefer.

Preheat oven to 450° F. and place a baking stone on the middle shelf of the oven.

Take a dough ball and place it on greased parchment paper. Using your hands, gently flatten and spread out the dough into a very thin rectangle. (The dough will shrink back a bit each time you spread it out, so let it rest or "relax" for 5 –10 minutes each time after you've spread the dough out as far as it will go.)

Brush the dough with 2 tbsp. of the oil. Evenly spread half the potato–onion mixture over the surface, leaving a 1" border around edges. Season to taste with salt, drizzle remaining oil over it, and sprinkle with half the rosemary (if you didn’t add the rosemary to the bowl with the potatoes).

While the first pizza is baking, top the other pizza with the remaining potato mixture. I parbaked the first pizza before adding the toppings, but it was a little too crispy so I didn’t parbake the second pizza.

Transfer pizzas to a cutting board and serve hot or at room temperature. 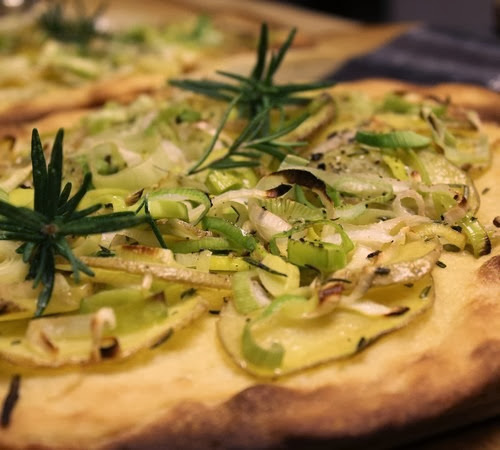 We enjoyed our pizza creation on New Year’s Eve.  My son ate it as an appetizer.  I ate it as a meal.

Edinburgh was one of my favorite places.  Now we have a special pizza/flatbread to bring back those memories.

This is one of the views of the city from Calton Hill. 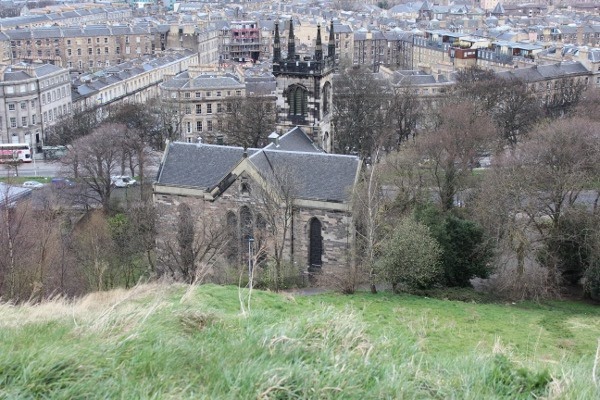 This is a view of the streets of Edinburgh at dusk. 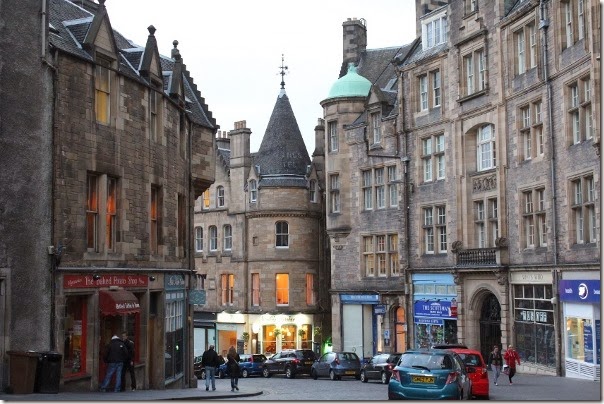