Traveling the Kontinentbrot without a road map

When David of hearthbakedtunes.com invited the Artisan Bread Bakers to bake Kontinentbrot with him, he neglected to mention that we would need to navigate the process by ourselves. He gave us the coordinates (the formula that he used), but not the directions on how to get there (make the bread). He did direct us to the original formula, but since it’s in German, I figured I was on my own.

Now, anyone that knows me, knows that I am, ah hem (clears throat), directionally challenged. When I got my jeep a few years ago, my kids were so excited because it had a compass in it. This was before GPS systems were standard in cars. My youngest son said “now you won’t get lost anymore”. Ha! Little did he know. I’m very good at getting lost. I’ve been working at it for years.

Fortunately, I’m better at navigating the bread-baking process than I am roads. I didn’t get lost. Here is my Kontinentbrot. 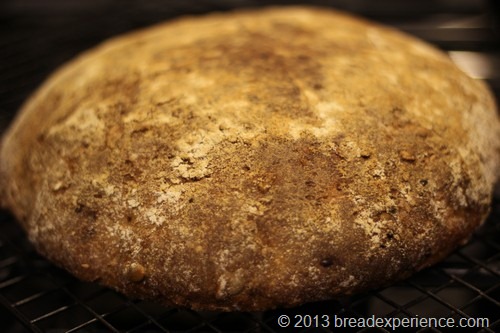 I used David’s adapted formula for this bread but followed my own process. He did provide some interesting background regarding the different type of soakers you could use. I chose the overnight Quellstück rather than the Brühstück that the original formula called for. David had removed the sesame seeds so I added them back in because I happen to like them thank you very much.

David described Kontinentbrot as, “…a wonderful heavy rye bread loaded with seeds and flavor, that will certainly help to keep you warm this winter...This bread is referred to as continent bread because it contains seeds from all over the world. Pumpkin Seeds, Sunflower Seeds and Flax Seeds.”

My slightly revised version is presented below.  I only had whole grain rye flour so that’s what I used.

I hadn’t fed my rye starter in a couple of months so I used this process for activating a sourdough starter before I began the process of making the build. 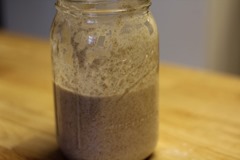 Make the build by mixing the rye flour, rye starter and water in a small bowl. Cover and let it ripen for 14 to 16 hours at about 70 degrees F. 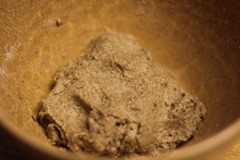 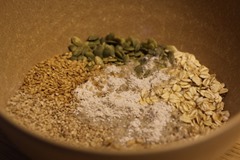 Let it soak overnight while the build is ripening. 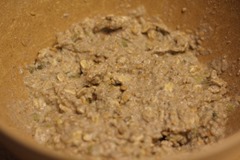 Add all the ingredients, including the sourdough and the soaker, in the bowl of a stand mixer.  Mix on first speed until the dough is thoroughly mixed. 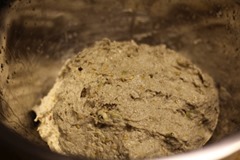 The dough is sticky so you’ll want to use wet fingers for this part. Shape the dough into a rough ball and place it in a proofing basket.  I used a lined banneton basket. 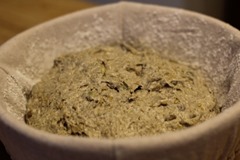 Cover it with plastic wrap and let it proof for about an hour at 82 degrees F. I used my proofing box for this part. 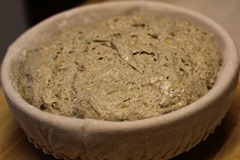 Preparing the Loaf for Baking:

Preheat the oven to 450 degrees F. with a baking stone on the middle rack and a steam pan underneath. Preheat the stone for at least 30 minutes.  Gently remove the loaf from the proofing basket onto parchment paper. It doesn’t need to be scored. 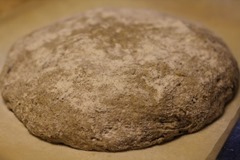 Slide the loaf (on the parchment paper) onto the preheated stone.  Fill the steam pan with water and spritz the walls of the oven with water several times during the first few minutes. Bake the loaf at 450 degrees for 15 minutes, then lower to 425 degrees for the rest of the bake, about 30 minutes. Remove the parchment paper partway through the baking cycle to firm up the bottom crust. 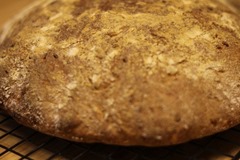 Cooling and Slicing the Loaf:

Remove the loaf to a cooling rack to cool completely. Wrap it in a kitchen towel and let it stand for at least 24 hours before slicing. 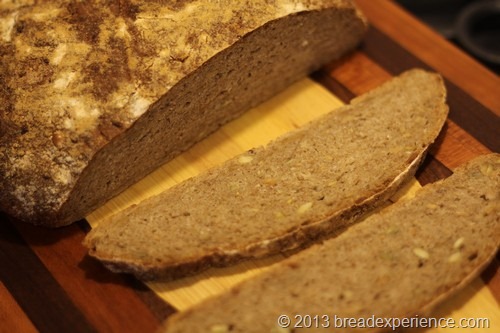 Although this bread has a tight crumb, it’s not really that heavy for a rye bread. It doesn’t have a strong rye flavor either which I found to be rather odd with all the rye flour that’s included in it. I’m okay with that. It has a good flavor especially with all of the seeds. It tastes really good with olive oil and herbs which is not something I would normally say about rye bread. It tastes good with cheese as well.