I decided the best way to review the book was to make some of the breads. As it turned out, the day after I received the book, I found out about the HBinFive bread-baking group that Michelle at BigBlackDogs had formed.  So of course, I joined.  The baking group officially starts baking through the breads in the book in January but we've been baking bonus breads (provided by the authors) for the past two months.  I've actually made a few breads from the book using the dough from the bonus breads.

For the most part, I've tried to follow the formulas as they are presented in the book.  However, having said that, one of the things I really like about this book is that the formulas are really flexible.  You can use mostly whole-wheat flour or substitute some or all white whole-wheat or use a greater percentage of all-purpose to whole-wheat depending on your preference or your family's tastes.  Granted, the bread won't be as healthy if you use more white flour, but the formulas will still work and taste great!

Another thing I really like about this method is how easy it is to fit making healthy breads into your daily schedule.  I love to bake bread but sometimes the thought of spending the whole night (or day) in the kitchen is exhausting.  With this method, you just mix up the dough, let it ferment a couple of hours, then refrigerate it and use a portion of the dough each time you want to bake bread.  Since I have a full time job and maintain my bread-baking site on the side, I usually do this part on the weekends.  The dough will last in the refrigerator anywhere from 5 to 10 days or so depending on the formula and most formulas make at least four breads.  So, once you mix up the dough, all you have to do is take the amount of dough you need out of the refrigerator, shape it, let it rise, then bake it.  How easy is that?  I even froze half a batch of the whole wheat challah dough for about a week, took it out and let it thaw in the refrigerator for 24 hours, then made 3-Strand Challah with it.  You can see the results below: 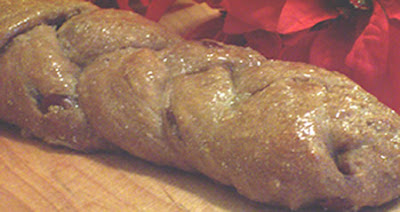 I could go on and on about how much I like this method and the book, but I think the breads speak for themselves.  Without further adieu, here are the Healthy Bread in Five Minutes' breads I've made so far: 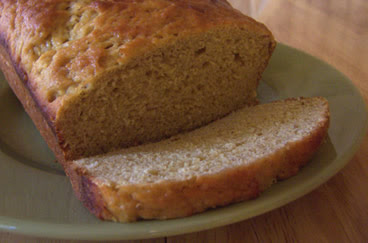 I made the dough for the Pumpkin Pie Brioche twice.   The first time, the dough was way too soft and the texture of the bread turned out to be very dry.  So, I decided to give it another try. The second batch turned out much better.  I loved the flavor and texture of the brioche. Read more about my attempts and successes with this bread. 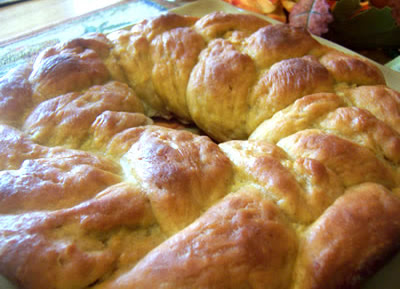 The Braided Holiday Pumpkin Wreath is not in the book, but I made it using the Pumpkin Pie Brioche dough.  Once I had the dough made, all I had to do was take the amount I needed out of the refrigerator (about 1-pound), shape it into a 3-strand braid and then make the braid into a wreath.  It makes for a very easy and beautiful Fall bread. Read more about how to make this bread. 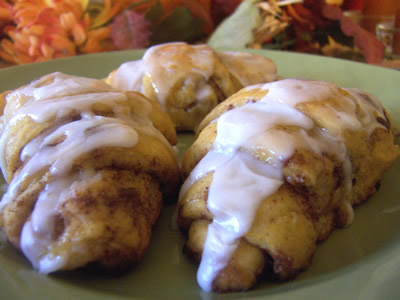 I must admit that Cinnamon Pumpkin Crescent Rolls is one of my favorite recipes from the book so far.  It's made using the Pumpkin Pie Brioche dough and some other yummy ingredients.  Although it doesn't seem like it's healthy, it is much healthier than your normal cinnamon rolls because it's made with about 40% whole-wheat flour rather than all white flour.  I really had fun with the recipe although it was a little tricky working with the wet dough.  Read more about these delicious rolls. 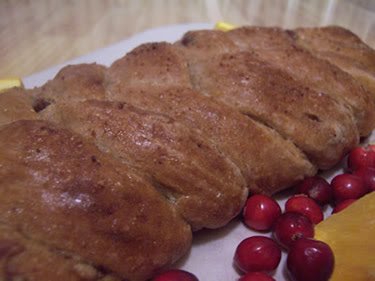 I made a 5-strand Challah using the Whole Wheat Challah with Cranberries and Orange Zest.  It was actually pretty easy to braid.  I used mostly whole-wheat flour so it doesn't have quite the rise as traditional challah.  However, the flavor is wonderful and it's healthy!  It makes great toast!  View my tutorial on shaping a 5-strand challah. 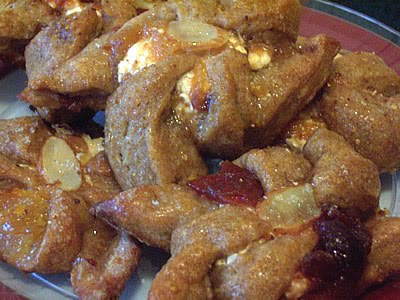 This is another one of my favorite breads from the book (so far).  I had never made pinwheels before so I was a little hesitant.  However, I got the opportunity to use my homemade jam so that was cool. I wasn't sure how the pinwheels would do with the whole-wheat challah dough with cranberries but I decided to give it a try.  Working with the wet dough was a little tricky, but I like the finished result. Don't you? It's much healthier than a store-bought pastry for sure. Learn how to make these pinwheels. 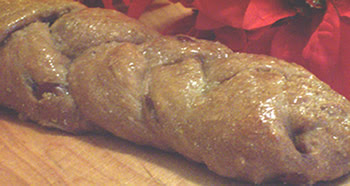 This is the bread I made using the Whole Wheat Challah dough I had frozen for about a week.  I made it into a 3-strand challah.  It was very easy to shape and tasted wonderful.  It actually tasted better than the dough I refrigerated because I had let that dough stay in the refrigerator a little longer than the recommended 5 days.  Freezing the dough seemed to preserve it. It was really fresh when I thawed it and used it for this bread.

I really like this book and the fact that the authors are so down-to-earth and accessible to their readers.  They interact on Twitter and Facebook and answer questions on their blog.  I definitely recommend Healthy Bread in Five Minutes to homebakers that want to learn how to make bread or ones like me that like to learn different and easier methods for making bread.