75% hydration KAMUT Pain Au Levain was my bread experiment last weekend. It has a very mild and wheaty flavor. 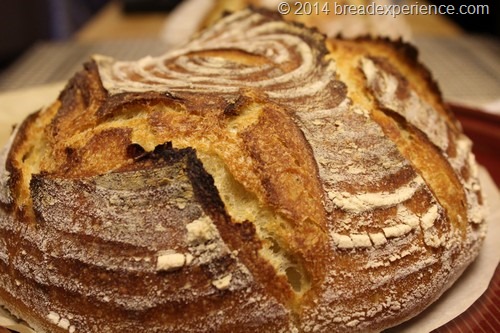 The BOM (aka bread of the month) for the Artisan Bread Bakers FB Group was a 69% Hydration Pain Au Levain. My version ended up being 75% hydration because it is made with white and whole grain KAMUT, and KAMUT absorbs more water than regular bread flour. I used 45g of my white sourdough starter which make the final dough 99.98% KAMUT, just shy of 100%.

I really enjoy baking with KAMUT flour. The dough is buttery and smooth and a dream to work with. And, as I mentioned earlier, it is more absorbent than white bread flour. It also has good elasticity and extensibility. These are the characteristics you look for in a bread flour. 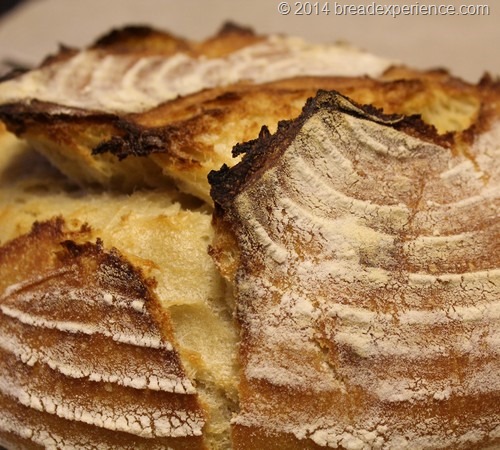 When it came time to bake the loaves, I was feeling pretty confident so I conducted a test in my Emile Henry Bread Cloche to find out how the bread performed in a cold stoneware baker (in preheated oven) versus a warm stoneware baker in the warm oven.

The first time I used the Emile Henry Baker was a couple of months ago when I made Country Brown Bread.  The loaf stuck to the bottom of the cloche so I was a little disappointed with the way it looked, even though it tasted great. 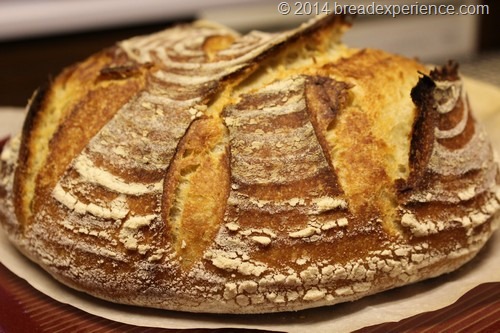 Mix the ingredients together and let the build sit at room temperature overnight or for at least 8 hours.

Stir about 465 grams of water into the levain. Reserve about 50 grams of the water (to mix with the salt). Transfer the levain and water mixture to a large bowl and add the flour. Mix using a wooden spoon or Danish dough whisk until a shaggy mass is formed. Cover and allow to rest (Autolyse) at room temperature for thirty minutes.

Add the salt and 50 grams of water and mix using the finger pinch method (grabbing the dough with four fingers) until the salt is thoroughly incorporated and no salt crystals remain.

Transfer the dough to a lightly greased bowl and cover with plastic wrap. Let the dough ferment for 2.25 hours with two folds at 45 minute intervals. The folds will really help the gluten development.

Prepare the oven for baking:

Adjust the oven rack so that it’s in the bottom third of the oven. Preheat the oven to 450 degrees for at least 30 minutes.

Remove the loaves from the baskets.

I baked one loaf at a time so at this point, I put one basket in the refrigerator while the other loaf was baking.

I placed the first loaf in the room temperature Emile Henry Bread Baker on a piece of parchment paper cut to fit the bottom of the cloche. This is my new trick to keep it from sticking to the bottom of the baker.

Score the loaves using the pattern of your choice.

I tried a scoring method similar to the one Chad Robertson uses in his new book Tartine Book No. 3.  To make the scores, I used a Mure & Peyrot Longuet Lame with a straight blade. The first loaf tore a little bit so I scored the pattern a little bit differently for the second loaf.

Carefully place the room temperature cloche in the preheated oven and cover it with the dome-shaped lid.

Bake the bread at 450 degrees for 40 minutes. Carefully remove the cloche lid and check the loaf about 10 to 15 minutes before the end of the bake cycle to see how it’s baking. Remove the parchment paper so the loaf will brown evenly on the bottom. For a darker and thicker crust, remove the cover during the last 5 to 10 minutes of baking. 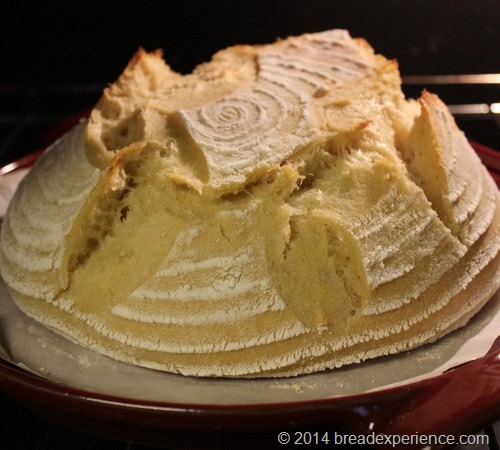 When the bread is finished baking, carefully remove the cloche lid and place it on a cloth to keep it from cracking from the temperature change. Remove the loaf to a wire rack to cool and place the bottom of the baker on a cloth-covered board.

Turn the oven back to preheat so it warms back up to 450 degrees F.

While the first loaf is baking, remove the second loaf (in the proofing basket) from the refrigerator. Flip it onto on a floured piece of parchment paper. I used the same piece of parchment for both loaves. Score the loaf using the pattern of your choice.  As I mentioned earlier, I got the inspiration for this scoring pattern from Tartine No. 3 by Chad Robertson. I embellished this one a bit.

After you remove the first loaf from the cloche, place the second loaf (on the floured parchment paper) on the cloche bottom.  It will still be warm so be very careful.

Place the second loaf (on the cloche) in the preheated oven and place the cloche lid back on and close the oven door.

Bake the bread at 450 degrees for 40 minutes. Carefully remove the cloche lid and check the loaf about 10 to 15 minutes before the end of the bake cycle to see how it’s baking. Remove the parchment paper so the loaf will brown evenly on the bottom. For a darker and thicker crust, remove the cover during the last 5 to 10 minutes of baking. 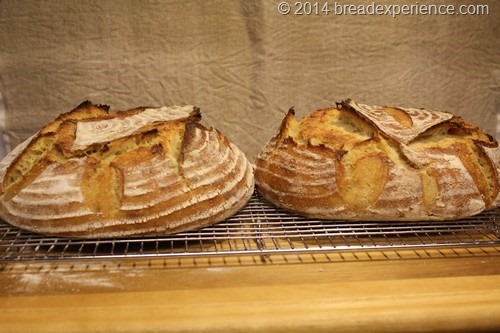 Let the loaves cool completely before slicing.  This is the crumb shot of the first loaf. I didn’t get a shot of the crumb of the second loaf because I gave that one away.  I actually bartered that one away for a ride to pick up my car from the shop. 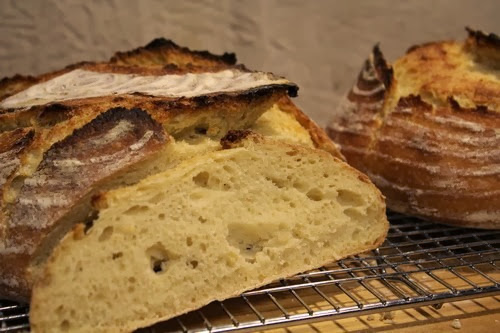 This is one of my favorite ways to enjoy this bread.  Grilled cheese with a pickle. Yum! 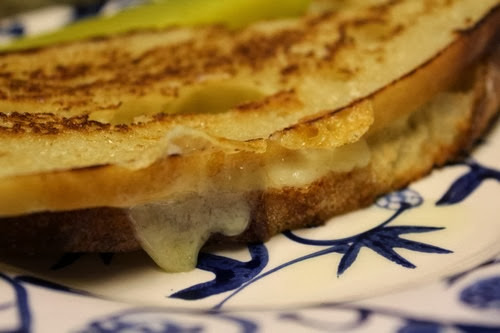