I’ve been bitten by the cracker bug. Once I started experimenting with different types of crackers, the floodgates were opened, and now I can’t seem to stop making crackers. It’s a whole new world in baking. There are so many possibilities. I’ve made crackers several times a week for the past few weeks. As can be expected, I’ve had some successes as well as some failures.

The other day, I was looking for a recipe to bake for an April Fools’ luncheon. We were supposed to bring a mock food or something that looked like something else. I had a hard time getting out of my bread box and thinking creatively for this one, but then it occurred to me that something grain-free would work. So I started looking for gluten-free or grain-free baking recipes. I finally found some grain-free crackers that looked edible. 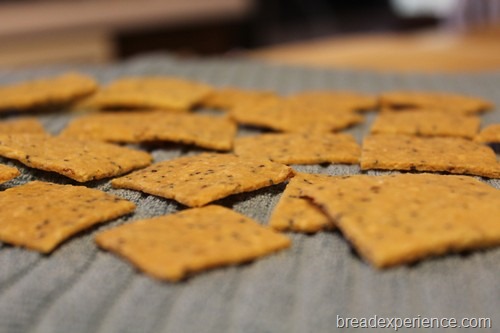 I chose these particular crackers because of the beautiful photos on  http://thenourishinghome.com.

If you want to bake these crackers,

Look for the recipe and instructions here.  Since baking with grain-free flours is still rather new to me, I didn’t adapt the recipe at all. I used Kelly’s recipe and method for making these crackers. She has several different versions to choose from and lovely photos to boot.

They say that no problem is a problem, but an opportunity to learn and to improve. So what I decided to do with this post is to reflect on some of the issues I had with making these crackers and provide some helpful tips to make them better, at least from my perspective.

When I baked the crackers and tasted them, my first thought was that this was a failure. I didn’t think I liked them, but I couldn’t quite put my finger on what it was I didn’t like. I would taste a couple and think, “Oh! these are pretty good,” but then I would eat another one and think, “what is this?” The flavor seemed okay, but they just didn’t wow me. I figured it was because they were gluten-free and I just prefer grains.

I really wanted to like these crackers so I decided to give them a fair shake. I went to the store and bought some grain-free crackers to try and determine what I liked or didn’t like about them. I fell in love with the store bought crackers. They tasted so good. I almost ate the whole box in one sitting.

The store bought crackers were made with several different types of grain-free flours and the grain-free crackers in this post are made only with almond flour so we’re not exactly comparing crackers-to-crackers, but what I determined from that taste test (for me anyway) was that it’s the texture, the crispiness, that makes the difference. The store-bought crackers were really crispy. I loved that!

At this point, I went back to the grain-free crackers that I had made and tried them again. I had rolled some of them a lot thinner than others and I found that I really liked those because they were crispy and light. It was the ones that I hadn’t rolled thin enough that I didn’t like very much. The texture was just not quite right. I’m also not sure if I like the onion flakes in these crackers, but I think that’s a matter of personal preference. You can always substitute different seasonings. 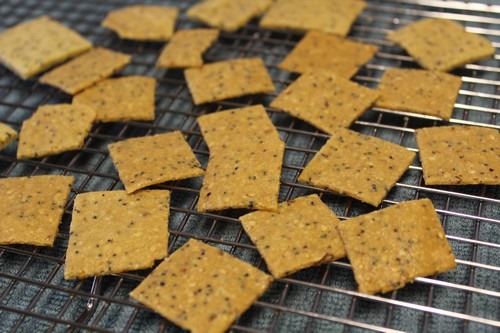 The key to these crackers is to roll them really thin. The thinner, the better and since you roll these out between sheets of parchment paper, it’s actually pretty easy to roll them thin. I just didn’t realize what a difference it would make, but I do now. Next time, I will roll them out thinner for sure. 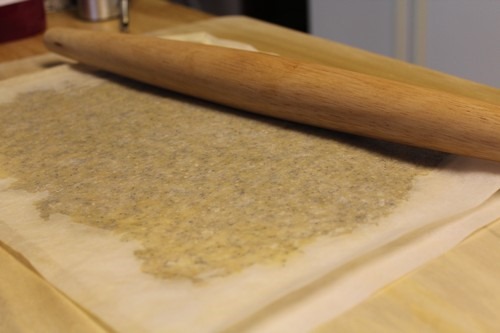 I think this is a pretty good starting point for a grain-free cracker recipe and with some tweaking for personal preferences, it could work really well especially for those that aren’t able to eat wheat. If you decide to try these crackers, I would welcome your feedback on what you like or don’t like about them and what tweaks you made to enhance them.

Even though I determined that rolling the crackers thinner would improve them and make them worthy of bringing to a luncheon, I decided not to make another batch because almond flour is not cheap. I’ll experiment more with that flour another time. I brought a bowl of fruit to the luncheon instead. The bread lady with no bread made for a good April Fool’s joke for sure, but everyone enjoyed the fruit so it worked out okay in the end.

So my experiment with grain-free crackers continues…